For those who’ve been waiting on Samsung, go forth and spend! 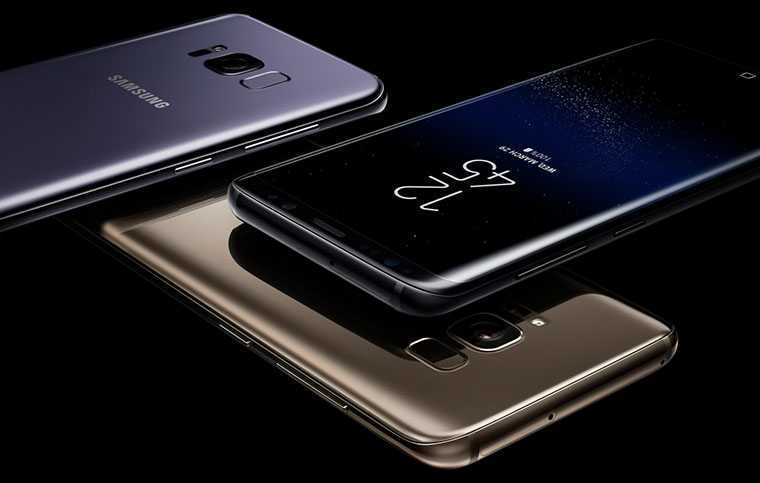 A quick reminder of what they offer.

The screens also have rounded corners, so things at the extremes are probably hidden. From what Samsung says, if you were to draw a rectangle within the rounding, it would come to 5.6 inches (142.24mm) with the S8 screen and 6.1 inches (154.94mm) with the S8+.

Also gone, the physical “home” button. Now all three buttons across the bottom are soft, on-screen ones. There’s a lot of screen with relatively little body surrounding it.

Samsung’s calling the display the “Infinity Display”. It uses AMOLED technology and comes with a new resolution for both models: 1440 by 2960 pixels. Samsung’s calling that Quad HD+. In both models the pixel density is so far north of 500 pixels per inch that any difference is quite invisible. The aspect ratio is being called 18.5:9, which is accurate but should properly be expressed as 37:18. I’m guessing that phone manufacturers are trying to keep 9 as the point of reference.

The very narrow side bezels make for relatively slim phones despite the larger screens. In fact, the S8 is a little narrower than the S7 it replaces at 68.1mm vs 69.6mm, and only a quarter inch taller because the bottom and top bezels are also narrower: 148.9mm. The S8+ is wider than the S7 Edge, up by less than a millimetre at 73.4mm and less than a centimetre taller at 159.5mm.

The point of all this is to keep the phones slim enough, despite the large screens, to use with one hand.

Both also get IP68 water and dust resistance rating. That means they’re totally dust proof and can withstand half an hour of immersion in up to 1.5 metres of water.

As we’ve been guessing for months, the phones move to USB Type-C ports for charging and other connectivity. All the high end good stuff is there, including NFC (of course – it’s needed for Samsung Pay) and the latest Bluetooth, version 5.0 LE with, apparently, support for data flows of up to two megabits per second.

The WiFi supports the 802.11ac standard of course. High speed mobile communications has been boosted to include LTE Cat 16, reputedly capable of something over 1Gbps. That would be, I expect, when you’re the sole user of the cell tower, standing within metres of it, and the wind is blowing in the right direction. Nonetheless, given that that is ten times what NBN tops out at, it’s seriously impressive.

(Audiophile paragraph: if this means nothing to you, it’ll not affect you in the slightest.) I haven’t seen it much remarked upon, but it seems that Samsung has been quietly doing a little audiophile stuff. The specs say that it supports all the usual codecs, and notes that it supports the underlying digital formats of PCM up to 32 bits and Direct Stream Digital in both DSD64 and DSD128 versions. The PCM sampling frequency isn’t mentioned, but if it supports DSD128, you can be confident it’ll do up to at least 192kHz sampling.

Here’s something fancy: you can have the phones play to two Bluetooth devices simultaneously. I remember when my kids use to share one pair of earbuds with an iPod. Now kids can share the same music through their Bluetooth headphones – and get both left and right channels!

You can “cast” video from the phones at up to 1080p at 30 frames per second to Miracast or Google Cast displays. That’ll cover most modern smart TVs. If you want to go higher, the USB Type-C connection supports video output, up to 4K at 60fps.

And with a suitable adaptor you can have a UHD monitor, mouse and keyboard plugged in. If the adaptor allows charging through itself, you’ve got a mini desktop computer!

Kind of like … Samsung DeX! That’s a new dock that Samsung is also launching for the S8 and S8+ ($199) “which connects the smartphone to an HDMI compatible monitor, and … to any Bluetooth-enabled, USB or RF-type keyboard and mouse.”

I’m still not entirely clear which processor is employed in the Australian model. Samsung tends to use either the latest, hottest Snapdragon, or one of its own Exynos processors, depending on the region. Samsung said:

*May differ by markets and mobile operators

One of those is likely the Qualcomm Snapdragon 835. It hasn’t since clarified. Australian usually gets the Exynos version.

In both cases there’ll be 4GB of working LPDDR4 RAM and 64GB of. You can add up to 256GB of storage on a microSD card.

The Samsung Galaxy S8 has a 3000mAh battery, while the S8+ gets 3500mAh. Battery life? It all depends, of course. Fast charging and wireless charging both.

I must mention Bixby, too, Samsung’s own voice assistant. There’s even a special button for it on the phone. I’ll reserve judgement until we see how it goes, but this is rather a crowded field, now, with offerings from Apple, Google, Microsoft and Amazon, just as the main ones.

You have to hope Samsung keeps the reputation it has for having the best camera in the phone business. The new models are said to be bumpless, but otherwise similarly specified to the S7 camera. The rear camera has 12 megapixels of resolution and dual pixel autofocus. That dual pixel system allowed the S7 phones to be the fastest focusers around. The maximum aperture is f/1.7 and there’s a 77 degree field of view. Optical image stabilisation keeps things steady. Enthusiasts can save RAW. There are stacks of processing modes, including panorama.