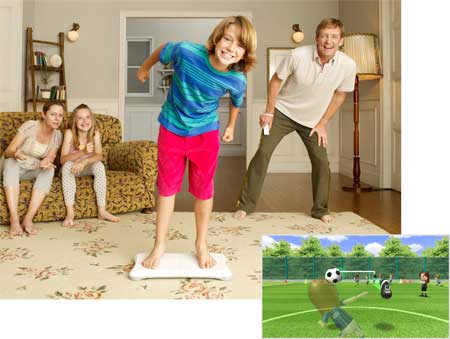 The question of whether computer games are good for you has at last been answered. And the answers is sometimes. A bit.

In keeping with its reputation for innovation in user interaction, Nintendo has added this new peripheral to its Wii console: the Wii Fit balance board. Coupled with a game disc that includes a few dozen exercises, Wii Fit aims to give you a light workout in your lounge room, and hopefully inspire a few of the less athletic members of your family to raise a sweat.

The balance board communicates with the Wii Console via Bluetooth, and acts as a secondary controller. It consists of two pressure pads side-by-side, which are sensitive enough to not only register weight but also the direction of maximum force across their surface.

This means the board can make judgements not only about how heavy you are, but also in which direction you are tilting your weight, allowing for balancing exercises, core-strength exercises, and even yoga.

The software is divided into four categories of exercise: Yoga, Muscle Workout, Aerobic Exercise and Balance. The more you train in each category, the more additional exercises are unlocked, similar to Nintendo’s portable hit, Brain Training.

Aimed at ordinary users, Wii Fit is simplicity itself to set up. Switch on the board, switch on the console, and you’re finished. Insert the disc and the game starts up, no problem.

Wii Fit first measures your weight, and judged where you are underweight, ideal, overweight or even obese. In a nod to privacy, your actual weight is only displayed if you press a button – though this kindness doesn’t amount to much when the game is calling you obese in front of anyone watching.

Once you’ve been judged, it’s possible to set weight-loss goals and promise the machine you’ll spend a certain amount of time with it each day. Claim you want to lose 10 kg in a week, and Wii Fit will warn you of the problems with such a lofty goal. Similarly, promise to spend an hour a day with it and then miss a few appointments, and it will chastise you next time you finally log in.

The balance board is a simple yet effective bit of kit. By measuring not only pressure but direction of pressure, it can give you lots of useful information about your performance.

While the fun factor of the various exercises varies, all do feel like they are doing you at least some good. The jogging exercise, which doesn’t use the balance board but instead relies on the accelerometer in the Wii’s default remote as a pedometer, actually gets your heart pumping. And morning-after soreness from stretching and muscle workout imply at least something is going on.

One of the odd things about the game is that some of the activities use the cute Mii characters and feel very much like a videogame. There are challenges, points, that sort of thing. But other exercise, such as Yoga, are hosted by robotic and slightly creepy humanoid instructors, and the experience feels very much like one of those trendy orthotic exercise pamphlets that were so popular in the 1980s.

It’s important to remember that Wii Fit is a game first and foremost. For the gym junkie, it won’t do much. But for the couch potato, it could stave off true obesity. The problem is that it relies on the gamer’s own motivation to do the exercises properly – you can “jog” by just shaking the Wiimote in your hand, for instance.

That said, Wii Fit does have a role to play in educating technophiles about the benefits of light exercise. It won’t help you shed a serious amount of weight, but it might get your pulse high enough, regularly enough so you no longer get puffed climbing a flight of stairs.

It’s as a family activity or party game where Wii Fit really shines. Which is odd because the multiplayer aspects of the game are quite limited. But standing around pointing and shrieking at the person trying to do hoola-hoops on the balance board is strangely compelling. Especially if a few cocktails are added: oh the irony!

Realise that Wii Fit requires you, the player, to do at least half of the real work yourself, and it’s a useful tool for light exercise. Expect the game to turn a potato beast into an Adonis, and it will be destined for the garage with the old Stairmaster and exercise bike.

Overall
Features
Value for money
Performance
Ease of Use
Reader Rating0 Votes
Makes basic exercise fun, innovative use of peripherals, gets your heart pumping, plenty of different activities.
Won't "blast your quads", no substitute for a real workout, limited multiplayer activities, some activities much more fun than others.
3.8