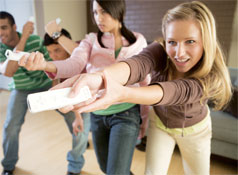 WiiWare is a new game download service, accessible via the Wii Shop Channel, where users can download a variety of new games in exchange for Wii Points. The Wii Shop Channel is free to access and is where WiiWare and Virtual Console games can be downloaded.

Developers, no matter how big or small, will be able to create new downloadable games to be sold through the Wii Shop Channel. Changing the way developers create Wii games and how players access them, WiiWare will make it possible for smaller, creative titles to take centre stage. The combination of low development barriers and unique game experiences, through use of the Wii remote, will enable developers to try new ideas with lower risk in a quicker, more creative and affordable way.

WiiWare games scheduled to be released for launch week include:

WiiWare also empowers consumers to determine with their Wii Points which games have the ability to become the next big thing. Consumers will assist in the creative process as their choices will directly determine the success of current projects and direct the plans for future ones.

There will be something for everyone on WiiWare with a wide range of games from varying genres, concepts and price levels.

A broadband internet connection is required to access WiiWare.