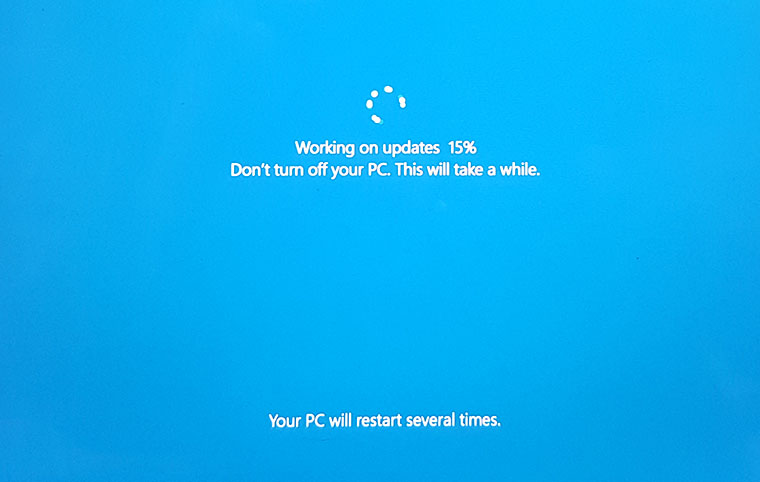 When I got all excited on 4 August 2016, about Windows 10 Anniversary Update arriving in Australia, I may have been a bit premature. My Surface Pro 4 updated straight away, as did a new computer in the house. But my older office computer was still on the old version of Windows 10 some seven weeks later. And, indeed, the two nice new notebook computers I’m presently reviewing, both on the old version (called 1511; the Anniversary version is called 1607), weren’t updating either.

It seems I’m not alone. It has been reported that as of the third week of September just over a third of Windows 10 computers have been upgraded.

Don’t worry, though, it will happen eventually. This fine Saturday morning I hit the ‘Refresh’ button on the iTunes Podcast page, only to have the audio bits dribble down the line very slowly indeed, with almost all of the podcast downloads failing after a few minutes.

I did a quick line speed test and discovered that it was running at just one tenth of the usual speed. I rebooted my router, having lately become suspicious of it. But that made no difference. I began harbouring dark thoughts about Telstra.

Then I discovered that one of the review computers was in the process of downloading the Version 1607 update. That download is about 4GB, and I’d just about finished its review so I turned off its network connection to stop the download. That sped things up a bit. Now the Internet connection was running at a quarter of normal speed. Then I checked my office desktop, and it also was downloading the 1607 update.

Happily, it was at 98%, so it only took a few minutes to complete. After that, normal Internet speed was returned and my iTunes podcasts downloaded at normal speed.

So, if your computer hasn’t yet upgraded itself, be patient. It will happen eventually. I just hope it doesn’t happen at an inconvenient time for you.