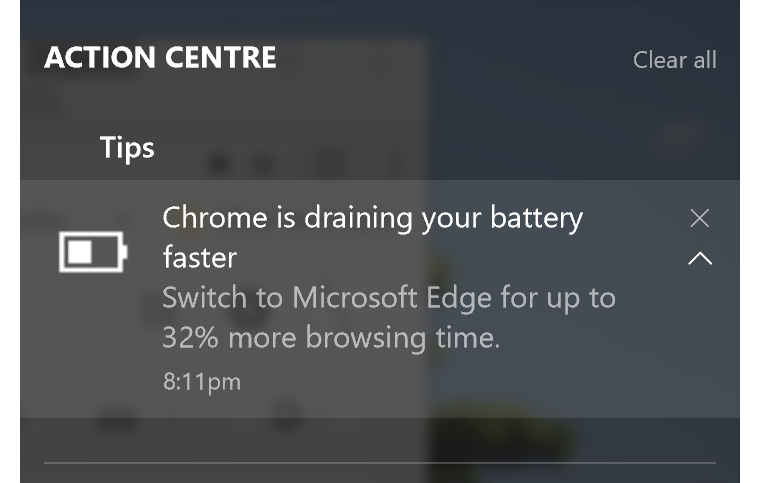 I love Windows 10. I’ve been using Windows since 3.1 and while there have been ups and downs along the way, ever since the trend line on Windows has been upwards. I downloaded a Beta of Windows 95 back in the day (a heart stopping exercise as the fifteen megabyte file slowly sputtered down the 14.4k modem connection) and thrilled at being above to open a dozen windows in Internet Explorer without it crashing.

But these days I use Chrome as my browser. I moved to Chrome a few years ago when it was demonstrably faster than Explorer. Now with Microsoft Edge in Windows 10, I don’t think that this is any longer the case. But I’ve been sucked in.

You see, if you use Chrome, you can use Chrome on your Windows computer and your Android phone and your Mac computer (and probably on your iPhone, although I haven’t tried) and it will keep all your bookmarks and auto-fills synced. That makes life so much more convenient.

Of course, Microsoft would prefer that I (and you if you aren’t) use Edge to browse the Internet, and Bing instead of Google as my search engine.

In fact, it’s so keen that it has taken to promoting Edge from time to time when I start up Chrome.

The first time I was so surprised that I didn’t think to grab a screen shot until it was too late. However the advice found its way into my Windows 10 Notifications. That’s what you can see above:

“Chrome is draining your battery faster”, it says, “Switch to Microsoft Edge for up to 32% more browsing time.”

Except that this was on my desktop computers, which doesn’t use batteries. No matter.

The next time I was faster:

“Microsoft Edge is faster than Chrome – Based on Google’s Benchmark. Switch Now.” That appeared as a bubble on the task bar.

And truth be told, I wouldn’t mind complying with the request, if it weren’t for that pesky issue of keeping things synced. If Edge were on Android and, preferably, Mac and iOS as well, I’d be happy to switch.

But until then, Chrome it is.

Meanwhile, overseas there are reports of third party products and services being advertised by Windows. I look forward to showing you those, if and when they appear.