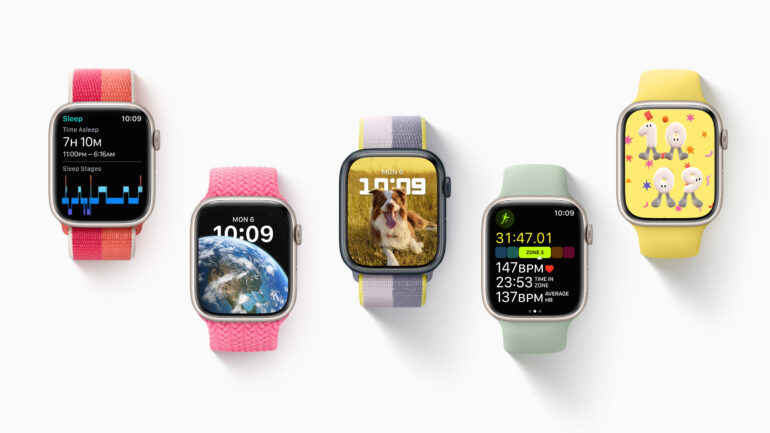 An enhanced Workout app, improved sleep tracking and new Medications app are amongst the health and fitness improvements in the Apple Watch watchOS 9 update.

Unveiled overnight at Apple’s Worldwide Developers Conference (WWDC) in California, watchOS 9 will be available for the Apple Watch Series 4 and later in the second half of the year.

The enhanced Workout app provides a range of new metrics for different activities. Runners gain access to vertical oscillation, stride length and ground contact time (GCT), to see how efficiently they run. They can also test themselves against their best and worst results, receiving alerts when they are ahead or behind the pace.

For swimmers, watchOS 9 can automatically detect when the swimmer is using a kickboard and recognise it as a new type of stroke. They can also track their swimming efficiency with a SWOLF score, which combines stroke count with the time taken to swim one length of the pool.

The Workout app also introduces Heart Rate Zones, measuring the intensity of any workout. It also adds Custom Workouts to better structure workouts and measure work and rest intervals, with new alerts, such as pace and power.

Fitness+ subscribers without Apple TV can now use AirPlay to stream workouts with on-screen metrics to compatible third-party TVs and devices.

At the end of a long day, improved sleep tracking in the watchOS 9 update allows Apple Watch owners to measure how well they slept through the night with sleep stages. It can detect when wearers are in REM, core or deep sleep, as well as when they are awake using signals from the accelerometer and heart rate sensor.

The watchOS 9 update will be available this American Fall as a free software update for Apple Watch Series 4 or later paired with iPhone 8 or later and iPhone SE (second generation) or later, running iOS 16. A public beta will be available in July.

With the update to iOS 16, the Fitness app will be available to all iPhone users, rather than just Apple Watch owners. It tracks steps, distance, flights climbed and workouts using the phone’s motion sensors, although it doesn’t provide the same depth and breadth of data as when wearing an Apple Watch.