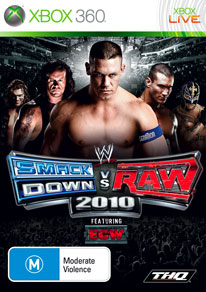 Now in its 11th iteration, the WWE SmackDown series is, forgive us, a dead ringer for its TV counterpart. But if you’re not a fan of the soap-opera of the US sporting world, don’t stop reading – eleven is clearly a good number for Japanese developer Yukes because WWE SmackDown vs Raw is quite literally fun for all the family. The game is accessible for all age groups, so if you’re an adult wrestling fun, you’re going to enjoy the amazingly deep Career, Create a Superstar options and online features, but if your kids want to have a crack at a piledriver or two, it’s easy for them to join you for a few rounds. The whole ‘sanitized violence’ nature of WWE really plays in THQ’s favour here, so while there’s blood, it takes a fair bit of bashing before it makes an appearance, and the over-the-top performances will make them giggle with delight.

The game shares the same languid pacing as its real-life counterpart, with wrestlers moving slowly but surely in the ring while they co-ordinate their choreographed moves and counter-moves, so newcomers to the series might feel like they’re mashing the controller buttons to no noticeable effect on the screen. This will be especially true if your favourite fighting games are titles such as UFC 2009 Undisputed, not to mention the Tekkens and DOAs of the gaming world! But stick with it, embrace the more measured pace and you gradually learn to fit in with the peculiar rhythm of WWE professional wrestling. Taking a big hit will stun your guy, but use the time where he theatrically staggers around in pain to plot your next move and you’ll begin to appreciate the game’s appeal.

The six unique storylines of the ‘Road to Wrestlemania’ career mode from last year is back, as is the create-a-superstar mode, now with added bells and whistles. There’s a great deal of innovation in the player-creation functionality of the game, allowing players to create their own content – their own wrestler, looking just how they want, with their own entrance, finishing moves, even specifying which signs are held up in the crowd – and upload it to the game’s servers so other fans can not only view it, but download it all to their game! It’s so deep, new players will likely be quite intimidated by the sheer volume of options on offer, but as a nod to WWE fans, it’s superb. There’s another great innovation this year, too, and that’s the ‘WWE Training Facility’, which is on screen as soon as the game boots up, putting two wrestlers in a ring in tutorial mode and providing new players with a really simple way of learning the ropes (sorry!) before they dive into one of the matches. This is a brilliant move for less experienced players.

A lot of time and effort clearly spent on the game’s presentation. The result is some impressive, slick and loooong drawn out entrance sequences which are, however, true to the real thing on the TV, so if you enjoy those, you’re going to be blown away by that here. Fire up the ‘Road to Wrestlemania’ mode with a superstar you’ve created yourself and when it starts you’re treated to the full-on spectacle of a montage of video clips taken for the real-life WWE (in, however, disappointingly low resolution) before you’re plunged right into the action, virtually dragged into the ring from the front row where you were an unwitting spectator. This is entertaining stuff – even only as a mid-level WWE viewer, I was willingly drawn in by this conceit, with a smile on my face, eager to play.

Clipping makes an unwelcome return from last year’s game too – limbs pass through heads and other limbs, a downed referee seems to stay on the canvas for ages, his head passing magically through the ropes every few seconds and weaponized objects like the trestle tables are never as solid as you’d expect! Wrestler animation is also still very inconsistent – oddly clunky in places and fluid and realistic in others. There’s a huge number of moves, however. The control system is built so that it can be played almost solely by pressing a single ‘attack’ button, effectively, which is great for younger players, but there is, in fact, a massive number of moves to execute, including an exclusive set of special moves for each wrestler, such as the ‘fan favourite, which is guaranteed to get the virtual audience on your side.

Other oddities include the ref constantly getting in the way, and the fact that you can attack your own wrestling buddy in the tag team matchups, as dodgy ‘enemy selection’ in the game means you’ll accidentally find yourself fighting your own partner a lot more often than you’d like. But that’s all part of the fun – enhanced in no small part by the soundtrack that is a perfect fit for all the high-octane shenanigans on the canvas: Skillet, Trivium and even the new single ‘Still Unbroken’ from Lynyrd Skynyrd – and the commentary, which hits the right note, making pretty accurate observations on what’s going on inside and outside of the ring. The guys name your characters (or nickname for created wrestlers), note when someone takes a particularly big hit and when you use objects like the table.

And you’re never going to be short on game mode options here – there’s a great choice of different match types that will satisfy even the most ardent American wrestling fan. For more casual players, the choice will likely be overwhelming, and you’ll probably find yourself sticking to the more familiar match types, like ‘Tag’ or a straight 1 vs 1. However, if you get this game, be brave and experiment, because some of the other options are great fun. We particularly enjoyed the cat-and-mouse play style of the table matches, maneuvering around the ring and working your opponents until you can get them in position to do a table finishing move.

Whichever match type you favour, chances are that you’re going to have as much a blast as we did playing WWE SmackDown vs. Raw 2010 – even if you don’t give a stuff about the real-life panto version. WWE Story Designer is an excellent addition for the fan base, even if it is a bit daunting to newbies and, for the first time in years, we’ve found that all the pieces of the puzzle have come together well enough to produce a WWE wrestling title that can reach out well beyond its core fanbase and provide crazy fun entertainment for just about anyone.