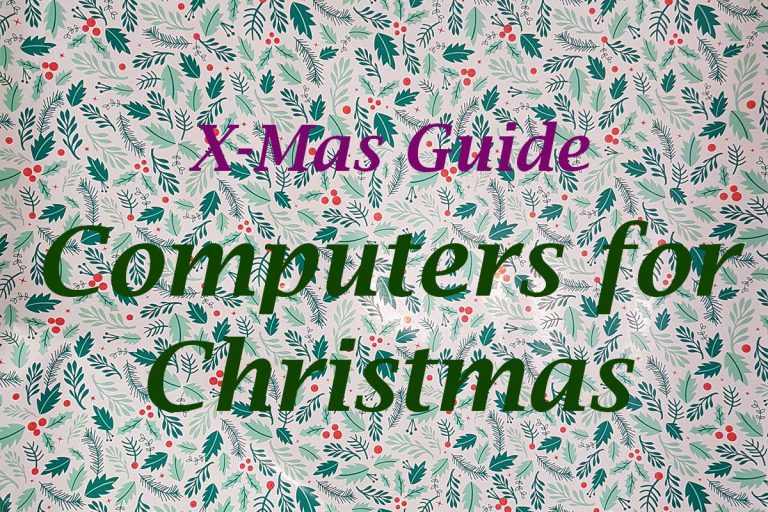 Computers are commodities these days. Well, most of them are. But there are still models that stand out from the pack to the point where we’d be love to receive one as a Christmas present.

Here we suggest a few. And remember, if no one else is going to buy you a computer for Christmas, you could always consider giving yourself a very special present.

Could HP produce a better Surface Pro than the Surface Pro? The 2017 model HP X2 Spectre comes with a great stylus – or active pen, however you like to call it – the latest Intel processor and a massively high resolution display.

And that stuff, along with a leather sleeve and detachable metal keyboard is included in the purchase price. Sound is provided by Bang and Olufsen speakers and wired connections are via USB Type-C.

And it looks great, finished in Dark Ash, with silver highlights.

It was quite the surprise when Samsung’s premium tablet appeared, running not Android but Windows 10. We reckon that the Samsung’s Galaxy Book 12 is an ideal travel companion. We were particularly impressed with that speciality of Samsung, the HDR AMOLED display technology used in the 12 inch display, and with the blisteringly fast AC WiFi.

Along with the latest generation of processers, it comes with everything you need, including the detachable keyboard and S-Pen.

It’s not a Surface Pro 5. Microsoft has gone for a gentler upgrade in 2017, so it scores only the year as a differentiator from what’s gone before. But this third of our group of high end Windows tablets still incorporates some eight hundred changes from the Surface Pro 4, including a kick stand that folds down flatter to facilitate the creation of artwork.

Some think it’s disappointing that the pen and keyboard are optional extras. Perhaps, but we think that they’d make great stocking stuffers.

Hey, this powerhouse of a professional notebook computer is so good that our man bought one for himself. With a 360 degree hinge, so you can use it like a tablet, the EliteBook X360 also sports Mil-STD 810G durability. In other words, these is a computer that’s going to keep on computing for years.

With a keyboard and trackpad amongst the best around, his bottom line was: “the most exciting, state of the art, notebook to date.”

The most obvious change in Apple’s latest MacBook Pro models was the introduction of the Touch Bar. Macs remain resolutely free of touch screens, so the Touch Bar offers some additional control flexibility.

The 15 inch model is the high end model, and it comes with a high end display, along with a choice of processors, fast solid state drives and, of course, the famous macOS operating system. One thing that impressed us more even than the long battery life was its remarkably linear discharge characteristics. If you do something for an hour and the indicator says that you’ve got 90% of the battery remaining, you should get another nine hours out of it if you keep doing the same thing.

You’d better pop a Christmas card in with this one, and have Santa write some special instructions on it. As it comes, the Microsoft Surface Laptop uses the Windows 10S operating system. In essence, that means it is restricted to using apps from the Windows Store. But Santa’s note will say that there’s a free upgrade to Windows 10 Pro available until the end of 2017.

On our test, we scored an astonishing 14.5 hours of battery life on a full HD video loop, and nine hours on a 4K video running at full brightness. Now that’s impressive.

Incidentally, although it is standard laptop in design, the high resolution screen is touch sensitive and will work with the Microsoft Pen if you want to add one to the stocking.

The cooling fans in notebook computers can be rather noisy. But did you know that Intel produces a low energy Core i7 processor that doesn’t need one? That’s what Dell chose for this computer. It doesn’t deliver the raw performance than the character’s “i7” normally conjure in one’s imagination, but it’s still great to have sprightly performance in a Windows computer without that frequent white noise whoosh.

The version we reviewed also packed a half a terabyte of SSD, USB Type-C and USB Type-A, and very fast WiFi. And it’s worth paying for the optional pen to really take advantage of the tablet mode, available when you fold the keyboard all the way back.

Some of us have been using Toshiba notebook computers on and off since … they had no hard disk drives and relied entirely on floppy disks! We still have one that runs Windows 3.11. And it still works when we take it out periodically and fire it up.

Portégé is Toshiba’s premium line, and this 2 in 1 is quite the performer, with good battery life and is nicely slim and light. It packs USB Type-C/Thunderbolt. The stylus is bundled with the computer. Clearly Toshiba has faith in this model, since it comes with a three year warranty.

You’ll have to hold out for a few more days – it isn’t available until December – but the new iMac Pro is for the loved one in your life who wants to combine Apple Mac refinement with raw, screaming power. The iMac Pro can be equipped with up to 18 cores of Intel Xeon processor. The monitor is a 27 inch, Retina 5K model. And as we noted in our coverage, the 22 teraflops of power in the computer’s graphics processing unit puts to shame the the computer specially built to manage the US nuclear arsenal in 1996. It could pull only one teraflop.

Apple hasn’t said yet what the price will be, but the US pricing starts at $US4999. So this is for someone that you love … a lot!

Read about the iMac Pro here.