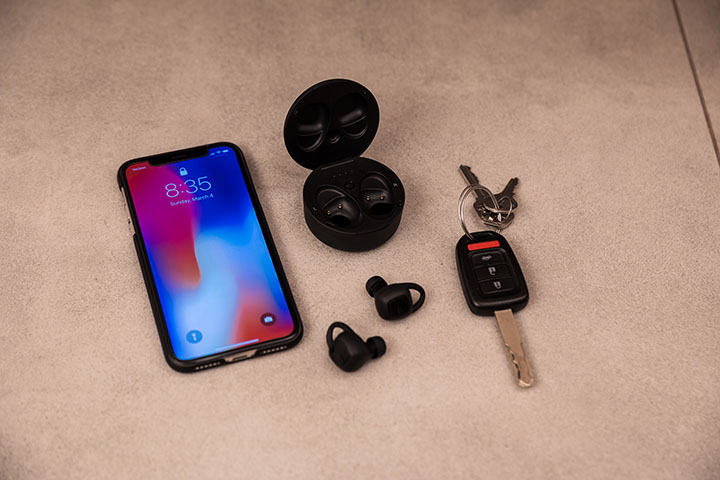 It’s about time I shifted my mindset from bricks and mortar to today: why not buy your earbuds from overseas? Especially if shipping is free? That’s certainly what it is for the xFyro Aria True Wireless Earbuds.

That of course involves buying online. In this case, that means from the xFyro website here. When I checked the website yesterday, they were listed for $US150, a forty per cent discount on normal price. When I checked today, they were shown for $AUD214 (again, a forty per cent discount). I’m not sure why it didn’t recognise I was from Australia yesterday. I’ll leave the US price in the box because I imagine the Aussie dollar price will vary according to the exchange rate. (Indeed, I checked again while doing my final proof read, and they were $AUD215.)

As seems to be the case so often these days, development costs were secured through crowd funding, in this case Indigogo. As I write almost $US2 million had been raised.

In most ways the xFyro Aria buds are standard for the breed. Two compact buds with built-in batteries connected with each other wirelessly, while one (the right one) connects with the source device. A small snap-case with a built-in battery charges up the buds. It in turn is charged via a Micro-B USB socket. The buds are held in place in one’s ears by means of friction with the silicon tips and wings which lock into the whorls of one’s ears. Three sizes of tips are provided, along with two sizes of wings.

Music is delivered, it seems, via the basic Bluetooth stereo audio codec, SBC. There’s no talk of AAC (preferred for iOS devices) or aptX or higher. There’s one button on each bud to handle playing and pausing, answering calls and hanging up, skipping tracks forwards and backwards and invoking Siri or Google Assistant. You can even put a current call on hold and answer an incoming one and switch between them.

But there are differences which move the XFyro Aria buds beyond the standard:

The buds can be fast charged too, getting three hours worth of playback from a 15-minute lodging in the case.

The buds are suitably light in weight. The right hand one weighs 4.9 grams according to my scales, as does the left hand one. The case, sans buds, weighs 40.8 grams. It’s circular and quite compact, measuring 56mm in diameter and 32mm deep.

The case has no exterior lights or indicators. Open it up and there are four blue LEDs indicating charge status of the case. There’s also – this too is unusual – a push button for power. You can switch it off so that the case will hold the buds without charging them.

The buds snap into place, drawn in by magnets and aligned by the sculpted cradle so that their gold-plated contacts join those on the case. They are easily taken out.

I found the largest of the three tip sizes worked best in my ears, providing the best seal. The wings added an excellent lock. I engaged in some rather vigorous exercise over a period of an hour, and not once did I feel the need to reseat them. They were completely secure.

As usual I listened to a range of material, from podcasts to music, from classical to rock to hip-hop.

The first impression – one that was maintained throughout – was that the XFyro Aria earbuds produced a good, even and natural-sounding tonal balance. That always gets a set of earbuds to 70% out of 100% on my sound score, since so many lean towards a harsh treble. Possibly they held the treble back just a little more than optimal, but coherence of the content didn’t seem to suffer as a result. In this case, a touch too little is better than too much.

At the bass end, there was a good solid performance down to encompassing the kick drums. That meant generally enjoyable music.

Super high fidelity listening? No. But good, solid hifi listening? Yes. Also, importantly, the tips provided decent isolation with a good seal, and the volume went louder than was comfortable when required, while remaining free of distortion.

The handsfree functions worked well. People with whom I spoke on the phone found me clear enough.

Operationally there were few wrinkles. Both buttons were fairly light, so they could be pressed confidently and effectively without placing undue stress on my ears. Those few wrinkles mostly concerned the volume. At one point some content started which was way too loud. You reduce the volume by pressing the button on the left bud. My hand darted to the button and stabbed it a few times, only to find that doing that invoked Google Assistant. You have to pause between presses.

Meanwhile, pausing playback is not achieved by using the normal single press on the right-hand button, but by double-pressing it. That took a bit of getting used to, so I frequently found myself turning up the level a notch when what I really meant to do was pause playback. If these become your only or main buds, you’ll soon acclimatise yourself to that slightly different functionality. And it’s a worthwhile trade-off to get the benefit of having volume control in the buds.

I also would have liked some feedback on the battery level. The buds use a female voice to tell when they’re connecting and so on, but as the battery depletes, they give no indication of the charge status. Nor did my phone’s Bluetooth connection display.

There was no way I could get eight hours of use out of them. Closer to four was my experience before an insistent beeping tone and voice telling me to charge them started up. That continued for a few minutes before they shut down.

Amongst the advantages of Bluetooth 5.0 is the incorporation of LE – Low Energy – into the core capabilities along with and longer range. Of course, Bluetooth frequencies in the 2.4GHz band go only where they’ll go – typically, not through water – and LE typically means less power in them. So, when I put my phone (Huawei P30 Pro, which supports Bluetooth 5.0) on my usual front yard rock and went for a walk, I easily got close to 50 metres away without any loss of signal. Well, until I turned my head. Once my head was in the signal path, the sound stopped. No doubt to the bemusement of my neighbours, I spent a while taking a step here, a step there, walking backwards, turning my head, to work out the range.

It turned out to be quite reliable beyond twenty-five metres, except when I had my head just so, thereby blocking the signal. I had to get back to just on ten metres to keep the connection, regardless of head orientation.

Throughout normal use, with the phone in my pocket, the connection was completely solid. Pressing buttons often involved a moment of the sound losing sync briefly between the buds, but it would always come back within a second or two.

The xFyro Aria earbuds are fine units, practical and respectable sounding. If you don’t mind buying from overseas, they represent very good value for money.