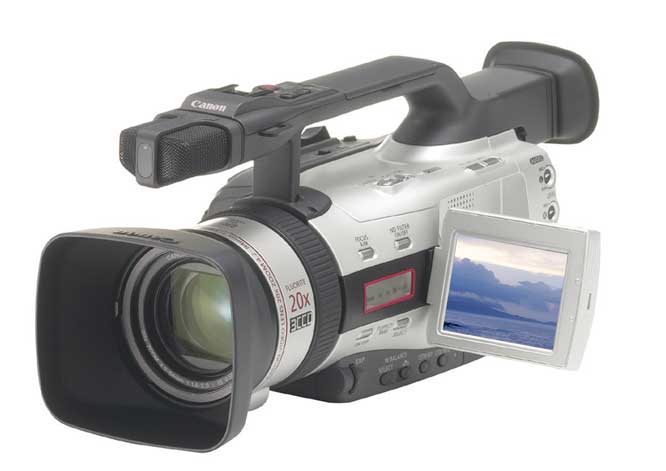 Mike Jones liked Canon?s XM2 so much he bought one. Here?s why.

To open up a conversation about video cameras in late 2005 is invariably to either begin with, or quickly move to, Hi-Definition as a central topic. But does this really mean that no one has any interest in Standard Definition cameras anymore? Is the current range of SD cameras on the market suddenly rendered second rate or obsolete?

Certainly SD is on the way out with the writing on the wall in capital letters but its complete demise is still a number of years away, and in the meantime a great many productions, both amateur and professional (and everything in between) are, and will be, making use of SD cameras. So in this vein it?s timely to revisit one of the canon of well regarded SD cameras, Canon?s XM2.

At time of writing, the XM2 is one of only two 3CCD DV cameras that Canon makes, with the other being the venerable XL2. I have a major aversion to the term ?Prosumer? so shy away from using it here or anywhere else; but, if forced to use the moniker, the XM2 is certainly a camera that fits this bill in the context of being inexpensive enough to be popular for non-professional enthusiasts whilst still being a common choice for independent short and documentary production as well as productions needing to be very mobile.

The XM2 (known outside of Australia as the GL2 for reasons unknown) is also a camera that is a veteran having been on the market since mid 2002; over 3 years for any single model of camera is in itself a testament to its quality. But in the face of stiff competition and evolving standards, how does the XM2 hold up?

One of the advantages for Canon in making just two higher-end models, rather than a whole flotilla of cameras in a range, is that features get concentrated rather than spread out over a range. As a result the XM2 is bursting with features and options.

First and foremost on any camera is the lens, nothing is ever more important than the quality of the glass through which light will be captured by your camera, and it is here that the XM2 still stands head and shoulders against a large number of current cameras. With a 20x optical zoom, Fluorite L series lens, the XM2 sports optics of outstanding quality. Canon make some of the most popular professional still and video camera lenses in the world and have obviously taken that experience to the work bench with the XM2.

The distinction of a camera between one suitable for professional use and one for consumers is not really a matter of image quality (a $1000 camera can capture remarkably good images in the hands of an experienced user) but rather shows in the range of detail of the manual controls of the camera. Here the XM2 excels in its offering.

Certainly you can flick a switch on the side of the XM2 and it?s in full auto mode and everything will be taken care of. But for those who want control over virtually all elements of image capture, just about everything can be manually operated and set on the XM2 – Shutter speed, aperture (given thankfully in standard F-Stops rather than arbitrary slide gauges as Sony seem to prefer), white balance, audio levels and level gain.

In tandem with these are a range of options for customizing the image and making adjustments to hue, sharpness and black-level settings as well as internally generated EBU colour bars; vital for confirming colour accuracy and calibration to editing system and monitors. The XM2 also has a variable level ?Zebra? pattern display that gives instant feedback on over-exposed areas of your image as you shoot.

For overly bright conditions where glare and reflections are an issue, the XM2 has a built-in Neutral-Density filter which can be manually switched on and off (with a convenient alert on the LCD display to tell you when it is or isn?t needed) and this makes a vast difference to your ability to capture fine detail in harsh light conditions.

Of course all the usual elements are there as well; analogue and digital input/output, mic in and headphone out, Lanc control, S-video and USB for transferring still images from the memory card.

Canon has been smart in the physical design of the XM2 (and XL2 for that matter) in not going with the standard black or grey but rather presenting a camera in a very distinct off-white with red trim; you cant miss them in a crowd being instantly identifiable. But aside from the visual aesthetics (and the XM2 is a good looking camera!) the physical and ergonomic design of the camera is extremely well thought out.

To begin with, the XM2 loads tapes from the top as all cameras for professional use should ? you should never have to take the camera off the tripod to change a tape! (this is something Sony should have paid attention to with some of their new models).

The XM2 is a nicely weighted camera and strikes a delicate balance between being small enough to be very portable and still big enough to be useful and comfortable in the hands, able to be operated very steadily. The top mounted handle is perfect for under-hand operation and accommodates one of the most useful features of the XM2, dual controls. The XM2 has zoom and record buttons on the rear (as with all cameras) but also has a second set on the top of the handle. As an added feature the speed of the zoom controls can be set independent for each. You might, for example, have the rear controls set for quick zoom, the lens moving overtly fast, and the handle zoom set on slow for when you want to track back smooth and unobtrusively. Simple but highly effective features like this make the XM2 an excellent camera for live-recording and documentary making where set-up time is a luxury and the camera-person most often has to think fast and on their feet.

Going with the overall slick and rounded design of the camera is the remarkable lack of protruding edges, the body of the XM2 is almost seamless with the elements such as the LCD screen tessellating perfectly into the body. This makes for a very robust design of camera that can certainly (as far as cameras go) take a few knocks and rough treatment. Rumour even has it that the US military video production unit uses XM2?s (painted up in camouflage) as standard issue because of this hard-wearing design and construction.

Very often it is the simple things that make a good camera design. The large barrel lens on the XM2 makes for excellent grip and control when focusing manually and a simple clip on the lens cap that allows it to be clipped to the side handle strap and thus prevent it banging around or getting in the way is a simple but very effective solution to an annoying problem of losing lens caps.

In terms of layout of controls the XM2, like all modern cameras, uses an on-screen menu for camera system settings but, thankfully, does not do so with the expense of manual buttons and dials. All the major controls an operator would want quick and ergonomically efficient access to are based (or can be set) as manual buttons on the camera chassis; white balance, aperture, shutter speed, audio levels. The XM2 also includes custom buttons that the can be specified by the user. Whatever function you need and use most often can be assigned to these buttons for one touch operation.

In the context of technology the XM2 is a veteran camera, some may even use archaic terms such as ?long in the tooth?. Certainly it?s been around a while and whilst that longevity says a huge amount about its quality it does raise questions about whether the XM2 can really compete with newer, younger models?

Well certainly CCD?s have got better and internal processing of images is always improving, but as any good cinematographer will tell you, everything is secondary to the quality of the lens and the Canon XM2 lens is still one the of the best I?ve seen on a camera of the price bracket. Certainly the gap has narrowed; with Sony and Panasonic using Carl-Ziess and Leica lenses respectively on their cameras, there is certainly nothing second rate about the competition, but the image clarity and precision of the XM2?s L series lens is still outstanding. This combined with excellent manual control meant I was easily able to capture clear and sharp short depth-of-field images, something often just not possible on DV camera. The XM2 is certainly a camera that makes the time spent shooting manually and carefully well worth it.

DV cameras, by nature of the format and type of compression coupled often with poor lenses, suffer greatly under low illumination introducing chromatic noise and artificial grain into the image. 3CCD cameras improve this problem somewhat but certainly are far from eliminating noise in dark areas. Whilst the XM2 does perform better than most cameras in low light, it is still a problematic area. If shooting in automatic mode the camera will increase the gain setting to compensate but quite often over-does it and brings in its own noise via the gain. The real answer is to light subjects properly and become familiar with how the camera deals with low light so you can make the best choices.

Like virtually all cameras these days the XM2 can capture still photographs to flash memory card. The images from the XM2 measure 1488 x 1128 pixels which is just 1.68 megapixels and by comparison to many other cameras this is pretty weak. Of course camcorder stills are never a replacement or real substitute for a dedicated still camera but if this feature is important to you then you?ll find the XM2 lacking.

In a world where technology changes faster than you change your underwear it?s staggering that the XM2 not only still holds up but is a serious contender in the sub $5000 3CCD class. That said, its time is certainly coming to an end not so much because of the move to HD but rather because the competition is and has caught up. When it was first released the XM2 was arguably leading the way for the competition, now it?s certainly keeping up with the pack but invariably, without upgrade, will fall behind. Undoubtedly Canon would find it a very wise choice to release a new model HDV format XM2 and if they stick to the excellent precedent set by the XM2, there?s little doubt it would be a superb camera. In the meantime, those in no hurry to join the HD race and looking for a hi-quality SD camera that may be a bit of a bargain at the moment as HDV is the flavour of the month, the XM2 may make an excellent choice.