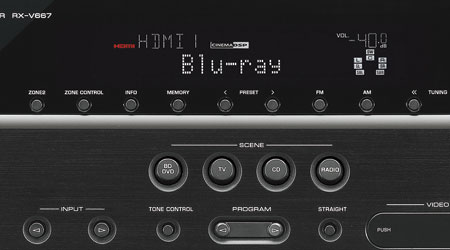 A successor to the RX-V567, the V667 is more than just a pretty (new) face. It has, in fact, had quite a cosmetic facelift, with the front panel now clearly delineated into an upper display and the lower part for most of the controls, including moving the main volume control downwards.

Aesthetics aside, you get two more HDMI inputs in the new receiver and they’re version 1.4, so will support 3D playback and Audio Return Channel (ARC). This sends audio ‘upstream’ from the TV to the receiver so you don’t need to use a separate audio cable into the back of the amp any longer.

The RX-V667 also returns to a discrete amplifier design (in place of op-amp stages in the previous model), aiming for better sound quality and better handling of low-impedance speakers. There’s also support for 3D transmissions from sources such as 3D Blu-ray players.

Getting the thing out of its box, the first thing you notice is the remote, which is absolutely hideous. The two-tone black and silver design wouldn’t be out of place on the set of Starsky & Hutch and is so out of step with the current black gloss of TVs, speakers and even its own receiver, that it smarts. It’s a multifunction remote but, really, the less you see of it the better.

At the rear, the RX-V667 has nine speaker outputs, with binding posts for all except those for Zone 2, so you can use banana plugs for your main speaker setup.

Yamaha has an easy speaker calibration feature called YPAO, involving plugging in a special microphone and selecting the auto setup option, and we found this adequate, so long as you keep very quiet while it works its magic and do a little tweaking afterwards.

All video is upscaled and output over HDMI, regardless of input, although the button for switching video sources on the receiver’s fascia is labelled ‘input’, but on the remote the same function requires you to push the button labelled ‘source’ and then one of the HDMI buttons. That’s a little confusing.

You have to buy an optional ‘YDS-12’ dock – or the YID-W10 wireless version – if you want to connect your Apple player to the receiver, but once connected you can select and play tunes from your iPhone and control the receiver’s volume level.

The graphical display on the receiver itself shows plenty of useful info, including if ARC is employed and which speakers are connected and outputting a signal. The RX-V667 can also display a graphical user interface (GUI) on your TV screen over what’s already there, saving you having to look down at the receiver’s own built-in display but keeping what you were watching in view. This even works on 3D TV.

One of the six HDMI ports can now be found on the front of the machine, which is certainly useful for testing, but also great for hooking up something temporarily in your living room, like a camcorder or the games console from the teenager’s room.

With movie and music DSP choices, along with several ‘scene’ buttons that will switch between preset CD, Blu-ray/DVD, TV and radio settings, there’s plenty of ‘one-touch’ convenience. But you have to wonder at some of the DSP settings: there’s one for ‘Concert Hall Munich’ as well as ‘Concert Hall Vienna’, for instance. Do they really enhance the listening experience, creating such distinction that it’s imperative you select the right one for what you’re listening to or watching?

We prefer the  ‘Pure Direct’ function. This shuts down the video and other internal circuitry, as well as the front panel display, providing a shorter path to the power amp stage for the analog signal to limit any possible interference for a purer audio experience. More extreme than using one of the concert-hall DSP settings, this really does seem to produce cleaner reproduction.

The RX-V667 generates 7.2-channels of output at a claimed 90 watts per channel, with 130 watts a channel available should you want to drive a channel individually.

There are two separate power supplies in the box; analog for audio and another for digital circuitry, with a corresponding leap in power consumption over the RX-V567 of almost 50 percent – up to 400 watts. But while it’s not going to be cheaper to run than the last model, the company’s ‘ToP-ART’ (Total Purity Audio Reproduction Technology), an in-house commitment to using the best available components, pays off here.

The 1080p video upscaling, again bettering the previous model by adding component upconversion, is brilliant. The sheer versatility of the RX-V667 – handling bass-heavy rap, to soaring classical scores, to Blu-ray epics like Avatar with equal fidelity – makes it a serious contender for music and movie fans on a budget.

There’s even capacity for a second zone via two separate terminals, although we didn’t get to test that.

The RX-V667 is a major improvement over the model it replaces; most significantly in the discrete amplification and power upgrades. For the full set, the YHT-994AU is Yamaha’s home theatre package that includes the RX-V667 and glossy black 7.1 ‘NS’-series surround sound speakers for an RRP of $2999.

Yamaha’s ‘core apple’ support (sorry, had to do it!) isn’t as cool or convenient as that offered by some of the competition, and the company includes a USB cable for connecting and charging your iPhone in the comparably-priced VSX920. But the RX-V667 is a full two-zone, nine-speaker, six HDMI 1.4 receiver with some great additions such as ‘Pure Direct’, a 3D DSP mode, discrete amp output and HDMI standby pass through. It’s a big improvement over its predecessor, a wonderful performer and superb value for money.