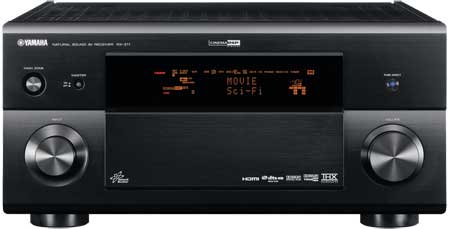 A few months ago I reviewed here Yamaha’s magnificent RX-V3800 home theatre receiver. My main problem was finding anything at all to complain about, and in the end I was unsuccessful.

Now here we have in the RX-Z11, Yamaha’s Statesman Caprice to the RX-V3800’s Commodore Berlina. Surely there could be nothing to complain about here either. But by dint of assiduous examination, I did find one tiny little thing for which a very modest criticism could be levelled at this unit. Success!

Where do you start listing the features of a home theatre receiver like this? You can’t in the space provided, so I’ll just hit the high points, and the single, er, ‘low’ point.

As for everyone else, take it as read that absolutely everything that you could possibly want in a home theatre receiver is there. Absolutely everything. Including 140 high fidelity watts from each of the seven main channels.
And then we add on the extras. For example, you also get 50 high fidelity watts each from four more channels, provided to power Yamaha’s ‘presence’ channels. These add additional verisimilitude from Yamaha’s three-dimensional DSP modes which ‘model’ various real-world performance venues.

If you want to change how the channels are configured, you can rearrange them in an unusual, but highly effective menu screen, to do just about anything, including bi-amplifying speakers and powering one or more of the three extra zones! The extra zones also get a coaxial digital audio output, plus a component video output for decent video quality.

There are five HDMI inputs (one on the front panel) and two outputs. If you have a projector, then you can use the second output to drive your LCD monitor for daytime use, avoiding cable swapping.

There is also a port for Yamaha’s iPod dock, two USB sockets for playback of media files, and an Ethernet socket.

I would like to say that I fully employed all of this receiver’s capabilities in my test, but I can’t. I ran out of speakers. Ideally, you would use the receiver as a full 11.2 channel centrepiece. But I lacked the requisite number of matched speakers.

Setting up was easy, thanks to Yamaha’s enhanced auto-calibration system. This is, to my mind, better than the systems provided on many other receivers because you can select certain items to remain unchanged (such as speaker sizes) and have the system auto calibrate all the other items. Even the equaliser provided good sounding results.

The video handling was just as good as the audio, and the internet, Ethernet, USB and iPod support all worked just as they ought to.

And, to top it all off, this behemoth only drew 0.6 watts in standby mode according to my power meter.

The Yamaha RX-Z11 is a massively well endowed, and massively constructed, home theatre receiver. Get help when you’re installing it. At 34 kilograms, you will need it.

But it’s worth it. It will do anything you want. Anything at all. Except, of course, accept 7.1 channel analog inputs!