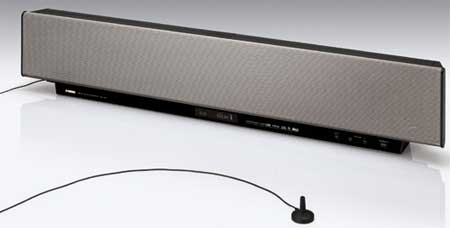 If the key to creating a realistic surround effect from the front of the room is using multiple speaker drivers, then Yamaha trumps everyone else. The YSP-1100 Digital Sound Projector comes with 42 of them! There are a couple of 110mm woofers, and forty tiny 40mm drivers.

Why so many? Because then exceptional control can be exercised over the directions in which sound is steered (or ‘beamed’ or ‘projected’ in Yamaha’s terminology) around the room. But only if each of the little drivers can be individually controlled. To this end, the unit also packs 42 digital amplifiers, larger ones for the larger drivers and teensy-weensy two watt jobs for the tiny drivers.

For bass, Yamaha now includes its $699 200mm subwoofer in the package.

The system acts as both a home theatre receiver and a speaker set. It has a number of analog video inputs (with component, but not S-Video), analog audio inputs and three digital audio inputs, allowing you to connect DVD players, recorders, digital TV receivers and the like. You place the unit where you want it, place the supplied calibration microphone on a cardboard stand in your seat, and then choose auto setup from the onscreen display. Three minutes later the system is ready.

It really was ready once I had completed that process. On the voice-going-around-the-room test, it was the closest to a real 5.1 channel speaker system, with just a slight loss of focus when the voice was immediately behind me. Just as importantly, the tonal balance didn’t change at all during this test, although there was a slight tendency towards ‘chestiness’ in the male voice.

The clatter of rain on the roof and windscreen of the victim’s car as it arrives at Bates Motel in the 1998 remake of Psycho was absolutely brilliant, and totally immersive.