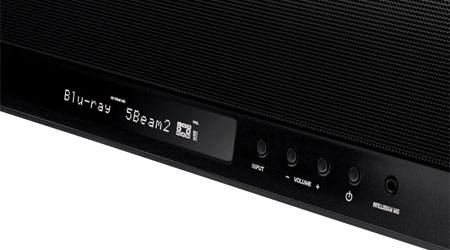 The Yamaha YSP-5100 is promoted as an all-in-one surround sound system for your big, flatscreen TV, with high-def sound capability, the option to be paired with a separate subwoofer, and an eye on convenience and aesthetics. It essentially looks like one long and hefty speaker, which can be wall mounted or simply placed on a TV stand or counter somewhere below the screen.

Soundbars of any hue are clearly marketed at consumers who want good sound but either aren’t all that interested in getting their hands dirty with the nuts and bolts of building a separates system themselves, have kids, or can’t persuade their partner that a new black-box edifice in the living room is a Good Thing. They’re never going to be as good as a proper 7.1 or even 5.1 separates sound system, obviously, but they’re a much cleaner and less fussy choice.

We’ve never seen so many taped-up, tied-down and fiddly individual bits and bobs in a box. Like one of those damned Transformer toys from Toys R Us, packaged by people in fear of litigation from the mother of some dumb kid who swallowed a tiny piece of plastic and have consigned the rest of the world’s parents to teeth-grinding frustration every time a Christmas or birthday rolls around.

Once it’s finally out of the box, though, the YSP-5100 is impressive in its sleek, weightiness, making you feel happy you’ve bought something substantial.

Auto calibration with the supplied microphone initially failed, but second time round worked a treat. I’d describe the onscreen setup menus as functional but not attractive.

The YSP-5100 also offers an optional wireless widget for connectivity to an iPhone or iPod – setup being a simple matter of plugging in the AC adaptor for the widget and slotting in your music player, then selecting the right input on the YSP-5100.

Like similar products, the Yamaha Sound Projector (YSP) creates surround effects by ‘bouncing’ sound off the walls of the very room you’ve placed it in. As such, the room has a significant influence on the level of surround you’ll experience. Large open-plan spaces tend not to provide many adjacent wall surfaces from which to reflect sound, while smaller, more enclosed rooms do. Front surround systems, then, tend to deliver better results in the latter.

This may explain why, in the room I initially set it up in, the soundbar was not as convincing as expected, despite also using the YST-SW225 subwoofer with the SWK-W10 wireless kit. The room was very large (about 40m2) with a ‘wall’ of French doors, lots of glass and two open areas leading off the room. With movies, most of the sound was clearly being projected from the central, front speaker in the unit and the surround sound effects were variable.

Strangely, surround sound was achieved with the soundtrack from Skate 3, an Xbox 360 skateboarding videogame. Clearly defined and separated channels reproduced the sounds of boarders skating up behind or across you, traffic coming in from the side, and so forth, affording a very clear spatial awareness of the environment.

So, just to check, we relocated the system to a much smaller, closed-off room, but with the same result – excellent, room-filling volume, great bass but variable levels of enveloping sound. For the most part, however, surround sound effects were good, with best results achieved on the ‘Concert Hall’ DSP setting, regardless of input source.

The down-firing YST-SW225 sub was tremendously powerful, making my wall-mounted DVD cabinets shake and rattle at half volume.

We experienced some signal drop-out using the wireless iPod function, but for the most part the feature provided fantastic vocal clarity and separation, although the mid-range could be slightly indistinct. This was clearly more a function of the compressed nature of the iPod tracks, with the YSP-5100 showing up the inferiority of the AAC and MP3 formats and proving too good for the source material.

For $3750 you can buy a whole lot of surround sound, including Yamaha’s own YHT-892AU 7.1 home theatre package – also with 1080p support, four HDMI inputs, iPod playback and even up-conversion for your input sources – for only $1999, which is nearly half the cost of the YSP-5100.

But the YSP-5100 isn’t playing in the same field as a component home theatre package. Its prospective owners appreciate simple setup, a cosmetic match for their flat screen, and a room full of sound rather than speakers. Yamaha’s soundbar ticks all these boxes, of course, but it’s fussy about the room it operates in, so check your retailer’s exchange policy before breaking out the plastic.