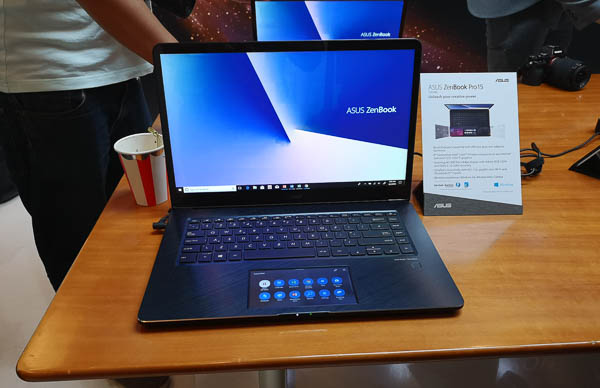 The ASUS ZenBook Pro is a step up on many fronts from the familiar ZenBook (non-pro, I guess). Better this. Faster that. But it is the ScreenPad that sets this computer apart.

ScreenPad? What’s that? It’s an idea so sensible; I wonder why no-one has already done it. Still, ASUS now has.

Well, there are four screen modes. They are easily accessible via a hotkey. Two modes are obvious: “Touchpad is Disabled” and “Traditional Touchpad Mode”. The first just kills the operation of the whole thing, including as a pointer control device. This can be useful if you’ve got a regular mouse connected. The other switches off the ScreenPad, leaving it operating as a boring old touchpad.

A third mode is “ScreenPad Mode”, to which we’ll return shortly. The final one is “Extension Display”. In this, the touchpad simply becomes a display to which you can drag things, as though it were just another monitor.

And that brings us back to the fourth, most useful mode of the ScreenPad. That is its “ScreenPad Mode”. In this mode the ScreenPad can:

ASUS hopes to encourage developers to enhance their apps to make use of the ScreenPad. A developers SDK is available now. The ScreenPad already provides controls for Microsoft Office apps.

I watched a bit of a YouTube video on the ScreenPad while the main screen displayed other things. Invoking Excel was a simple tap on the ScreenPad shortcut. I used the controls it provides to highlight a block of cells and set the colour of the text therein. Then I dragged the spreadsheet onto the ScreenPad where it was surprisingly readable.

Yes, a full spreadsheet on the ScreenPad

It did strike me that the if there’s an inadequacy in the system, it’s the switching between using the ScreenPad as a touchpad and using it as an app enhancer. Perhaps it needs an override button to flick it between modes – touchpad or ScreenPad. Yes, there’s a hotkey, but after you hit that you have to choose the mode you want. Ideally, a key or switch with a direct toggle between ScreenPad (in whatever mode you’ve last used it) and touchpad would add to usability.

With that caveat, I’d suggest that the ScreenPad has the potential to be more than a mere evolution in computer usability, but a significant jump. If ASUS doesn’t hold too tightly to its patents (I assume that the IP protection on this development is strong), perhaps licensing this technology to its competitors at reasonable rates, I could see it spreading across the computer industry rapidly. And that would in turn spur all manner of innovation.

When you have thousands of developers, most of whom are much smarter than me, turning their minds to a new facility like this, there’s a good chance that something very special will appear.

Oh, that’s right. There is more to the ASUS ZenBook Pro than the ScreenPad. It’s a rather powerful computer, even should the ScreenPad be left in “Traditional Touchpad Mode”.

In fact, there are two of them: one with a 15.6-inch LED-backlit display, and a forthcoming 14-inch model. The latter is later, to the extent that I saw but one early version, while there were plenty of the larger models around at the launch. And even with the 15.6-inch model, there are a host of options.

For example, the basic model runs a full HD display, while it can be optioned up to a same-size UHD display. And that’s a pretty impressive display.

The UHD version is Pantone “validated” to ensure accurate colour. Indeed, the display has a Delta-E of less than two. At the launch, ASUS used a test instrument to demonstrate (after a couple of wobbles, which may have related to the test device pointing in the wrong direction) that the Delta-E of the demo unit was a mere 0.97.

Um, Delta-E? What is that? Well, how do you tell if a colour displayed on a screen is different to the original? You can measure it to the nth degree. But that won’t really be helpful. What you typically want to know is whether a human can see the difference. If one shade of violet is measurably different from another shade, but a person can’t detect the difference, does it matter?

Delta-E measures the differences between two colours using remarkably Pythagorean-looking things like square roots of summed squares of colour-space co-ordinates. ASUS reckons that a value of two or less for Delta-E means that the colours are indistinguishable. While I’m pretending some expertise on this issue, I’m largely relying on Wikipedia when I assert that studies suggest that the matter is a little trickier than that, since some colours are inherently more distinguishable to the human eye than others.

Oh, but let’s get real. Some Golden Eye viewers may be able, with careful study, to pick correctly between two colours with a Delta-E slightly less than 2. You? Me? I don’t know about you, but as for me: I doubt it. Back in the olden day’s colours were all over the place. That something coded as red displayed as red was, for regular folk, good enough. These days something coded a specific Pantone shade of red will appear on the displays of the new ASUS ZenBook Pro computers as that specific Pantone shade of red.

Also, to (effectively) perfect colour accuracy on its own display, the ASUS ZenBook Pro supports up to three external 4K displays thanks to the two USB Type-C/Thunderbolt 3 ports. (If you’re counting, that makes up to five displays in total, including the ScreenPad.)

One last note: the keyboard felt right to my hands and fingers. No mal-proportions with this one.

The ASUS ZenBook Pro will be available in Australia from the middle of July, with prices starting at $2999.

The writer attended the launch of the ROG Phone in Taipei as a guest of ASUS.