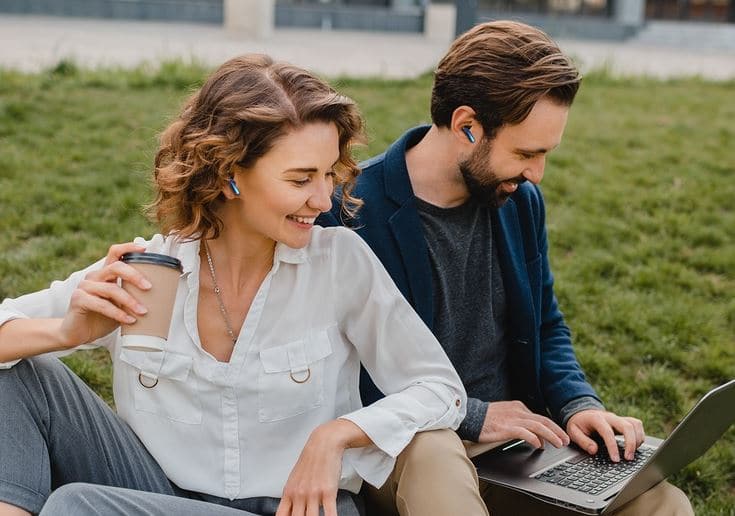 We are reviewing them primarily as a courtesy as they were ‘thrown in’ with the fabulous Zendure SuperTank Pro 100W power bank (review here 4.8/5). But, to Zendure’s credit, these buds are pretty good.

And if you believe the company claim they are the world’s lightest ANC buds (4.2g), yet they have an oversized 13mm driver for great bass and last for 6.5hrs plus another 15.5hrs with the charging case.

I have been using the ZenPods for about a week. Most days it is for an hour walk and then one epic test for eight hours to test the battery life.

The trick with any in-ear-canal buds and ANC is to get a good fit. Too loose and they can fall out. Too tight and they can irritate the ear. The medium tips worked for me, were comfortable, and allowed a degree of passive noise isolation.

BTW – these metallic blue buds stand out more than those boring white AirPods.

Now I am the first to admit that I don’t like buds. Sorry but the music I like – Jazz, Manhattan Transfer, Blues Brothers and 60s and 70s genres – usually overpowers buds. You get muddy, dirty bass, shrill treble, and a very narrow soundscape.

These were particularly good with just enough bass to satisfy, and just enough treble recess to avoid harshness and round out the listening experience.

GadgetGuy is familiar with Qualcomm True Wireless and its on-chip ANC. It is OK, nothing special, basically on or off. That is what you get here. It has a passthrough mode to let in conversation.

It seems most effective with traffic noise but was unable to block low frequency rumbling trucks. Frankly no matter what any bud brand says none can do ANC like over-the-ear-headphones.

The documentation states one mic at the end of each pod stalk. To have effective ANC and use as handsfree, it needs at least two mics per pod. Under a magnifying glass, it seems that there may be two more mics – two for ANC and one for voice.

Handsfree is clear, although it suffers from wind noise.

The touch controls require finesse and patience to master with too many accidental touches, especially when using a voice assistant.

You don’t need an app, but it can be handy for ANC levels and EQ. Jabra has one of the best apps, including a terrific EQ.

Zendure claims 80ms latency in mobile games and that is very good. While it was fine for movies (good lip-sync), there was a fraction of a second delay in mobile games (and it was not due to the Samsung Galaxy S20 Ultra 5G).

ZenPods claim 6.5hrs at 50% volume. With ANC on and over five days (about five hours) at around 70% volume, they were exhausted in under 5 hours.

Charge time in case – not accurate but about 1.5 hours.

They are IPX5 which is A sweat and light rain rating.

GadgetGuy’s take – ZenPods by Zendure – fine, but there is way too much competition to seek them out.

These are on Indiegogo at special introductory prices – currently A$164 (35% off) plus freight. Let’s say $200 all up. For what you get that is good value.

So, unless you specifically want iridescent blue Pods, you have way too much choice.