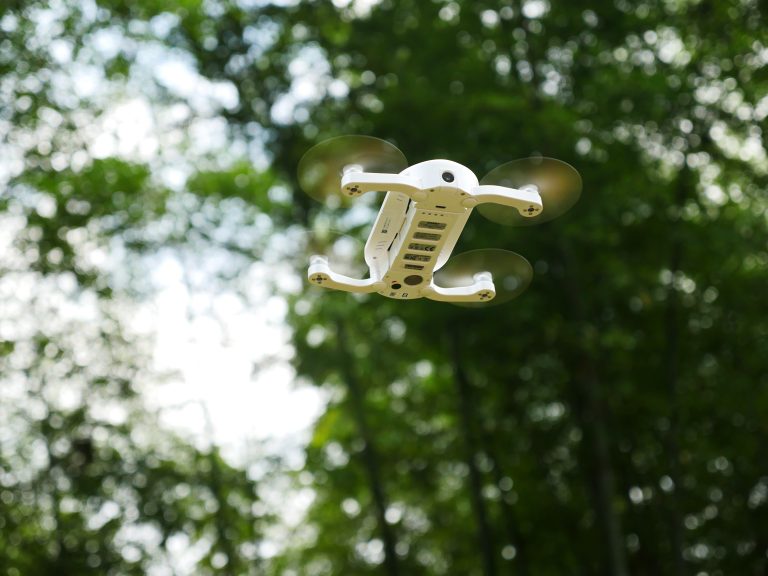 Drones are going to be a popular purchase this Christmas, and with each coming year they get better and better. We got our hands on ZeroTech’s new and cutely named ‘Dobby’ drone, and took it for a few test flights.

Dobby could be classified as a ‘hobby drone’, or ‘micro drone’, meaning it’s small and light enough not to hurt anyone (much), and isn’t intended for professional drone duties. It also falls under the relatively new class of ‘selfie drones’ because of a ‘follow-me’ feature that can keep the camera pointed at you or someone else while they move around.

The first thing you’ll notice about Dobby is how portable it is. It weighs just 199 grams and is about the same size as an iPhone but about three and a half times as thick. Dobby’s 4 propeller blades fold outwards for flying, and all packs up nicely and can be stored easily in a purse or jacket pocket.

Setting up Dobby for his (her?) maiden flight was easy to do. You simply install the Do.Fun app on your Apple or Android smartphone and set up an account. Dobby creates its own Wi-Fi network to connect to your phone, and the app provides fight controls, camera settings and enables you to transfer and share your footage.

When it comes to flying, Dobby relies mainly on its GPS when outside to figure out its position so it can return home and land if needed. It can fly up to 20 meters in altitude and withstand gusts up to 28Km/h. Inside buildings, it uses a combination of ultrasonic positioning and ‘optical-flow’ sensors to gauge altitude (to a maximum of 3 meters) and position.

Flying Dobby via the Do.Fun app offers reasonable real-time control but there seems to be about a half a second’s lag between making inputs and the drone reacting. On the good side, this helps keep Dobby from being too twitchy. You can see what Dobby sees via its front-facing camera, and you can snap photos and record videos via this view as well.

Dobby is happiest outside, where there’s lots of space to manoeuvre. Inside, Dobby was not quite as easy to control as it had to deal with updrafts created by its blades, and one of our carpets appeared to confuse its sensors. Otherwise, we liked the palm landing feature where you can direct Dobby to settle gently (or take-off) on an outstretched hand.

The last thing to note about flying Dobby is that this little guy is loud! While it would be nice to pull Dobby out of your pocket and subtly capture a selfie video, you’r not going to do this without attracting a lot of attention from passers by.

The camera’s image stabilisation helped iron out the bumps in our videos. Photos look decent too, and the lens doesn’t suffer from fish-eye distortion.

A new ND filter now comes in the box with all Dobby drones, which helps improve image quality in bright, sunny condition.

You can manually change the camera’s lens angle and even the pitch of the drone to ensure that the camera is pointing where you want it, such as straight ahead or towards the ground.

There are a few recording modes that help make capturing footage easier. With stills, you can tap the shutter manually, do bursts or set a timer.

With videos, there’s a clever 10-second auto-tracking video mode as well as an orbital mode, which is a pre-set flight path around an object or person while keeping the camera tracked on them. It’s the sort of shot you’d see in a big budget movie.

And this is where the whole ‘selfie’ thing comes into play. Dobby can be set to recognise and track faces, and even objects. A square box appears over the face or object you select on the drone’s camera, and then Dobby will hover, follow and continually point its lens at this person or thing until you stop it. So essentially, you could get Dobby to do things like capture your latest golf swing, record you climbing up a cliff face, or whatever dangerous or crazy pursuit you want to capture and show your friends.

While good, it does have its limits. If you move too fast, Dobby can get a bit confused, and varying lighting conditions (such as low light) can trip it up. The follow-me feature isn’t something that you’d use for extended periods of time either but is a fun way to put yourself in front of the camera.

Once you’ve recorded your footage, it’s stored on Dobby’s 16GB non-removable memory, although this can be transferred to your mobile via Wi-Fi or you can plug in the supplied USB-C cable.

On the power side of things, the Dobby can fly for 9 minutes on a full charge. It comes with one lithium-ion battery in the box, and there’s a USB-C based charger and battery cradle included. It’s also great to see a USB-C to Micro-USB adaptor included just in case you want to use a Micro-USB cable.

The battery, thankfully, has an LED charge indicator on it so you can check battery levels on the go, and it takes about 90 minutes for a full charge.

All up, we enjoyed our time with Dobby, and this little drone will provide hours of fun over the holidays. The ability to easily pack it into a bag or pocket means you have the option of a drone-shot selfie or video wherever you find yourself, and is a great excuse to get out into the glorious Australian summer and capture some great memories.  You can buy Dobby from its website, or at selected retailers.

Overall
Features
Value for money
Performance
Ease of Use
Reader Rating0 Votes
Very easy to carry and packs in quite a few features.
Loud, could do with a longer battery life.
3.9