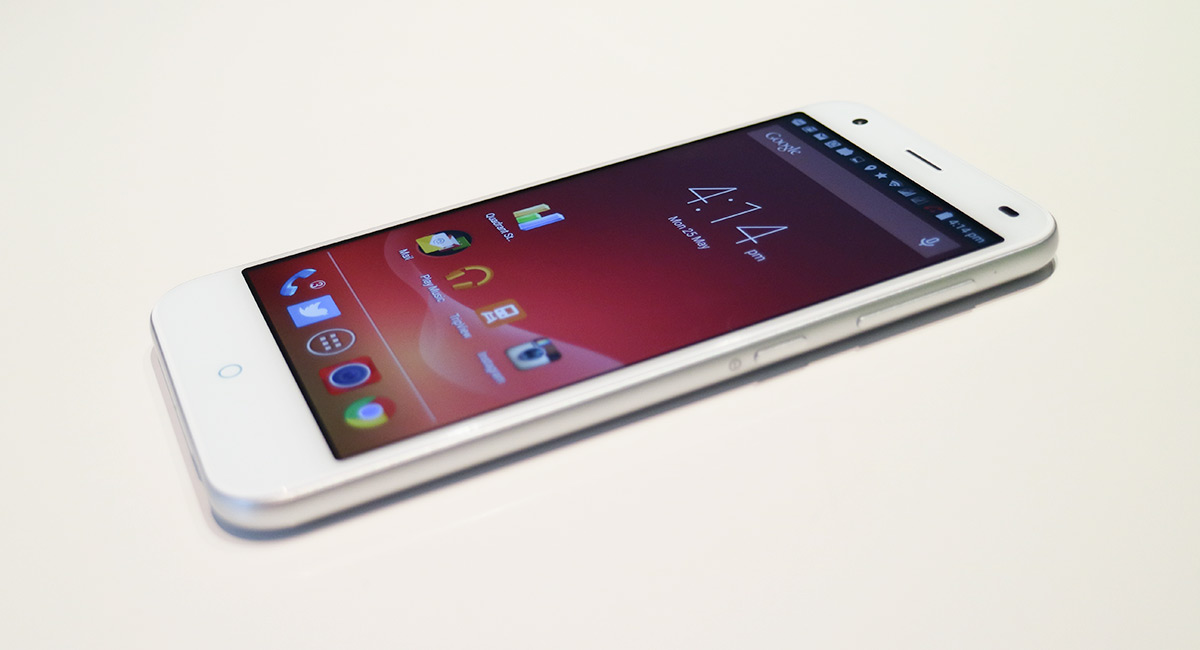 You might never have heard of the brand “ZTE”, but just like Huawei, they have been doing business in smartphones for quite a while.

In fact, the comparison between the two is apt, as just like Huawei, ZTE once spent most of its time making products for telcos, building smartphones, tablets, and mobile broadband devices and releasing them with the badging of a telco rather than that of their own company.

Recently, though, ZTE has been doing what other manufacturers have been doing and making more than just another phone for another telco, branding their own gear and selling it online and in retail stores.

The Blade S6 is an example of this, and is ZTE’s latest attempt to storm the budget-to-mid-range part of the market, offering a top-tier-like gadget without a top-tier-like price.

Starting this off is the screen, and that’s an area ZTE hopes to attract people, with as 5 inch 720p HD In-Plane Switching (IPS) touchscreen, providing a resolution of 1280×720 and delivering a pixels clarity value of 294 pixels per inch.

Under this, you’ll find the guts of the phone, with ZTE going with one of Qualcomm’s Snapdragon 615 octa-core processors made from a 1.7GHz quad-core and a 1.0GHz quad-core setup paired together. This is matched with 2GB RAM and 16GB storage, and there’s even a microSD slot here if you decide to expand on this later on.

Google’s Android OS is also here, setup at Android 5.0 “Lollipop” out of the box, making it pretty much up-to-date.

Cameras are of course offered in the ZTE Blade S6 — it’s a phone, after all, and that is par for the course — and you’ll find a 13 megapixel shooter with a flash on the back, while a 5 megapixel camera can be found on the front without a flash.

Connections are more or less par for the course as well, with 802.11a/b/g/n/ac WiFi provided alongside Bluetooth 4.0 with A2DP, GPS with A-GPS, as well as microUSB for wired, and Category 4 4G LTE providing the mobile connectivity.

Ports for the phone are fairly standard too, and there are few of these, with a 3.5mm headset jack up top, a microUSB port at the bottom, and two pin ejectable trays on the left edge providing access to the SIM tray with two nanoSIM areas and the microSD slot for upgrading the storage.

Buttons are also relatively standard and limited, with a physical power button and volume rocker found on the right edge, with three soft buttons found below the 5 inch LCD screen.

The main soft button resembles a circle and always sends you home, a blue light shining underneath, while the remaining soft buttons — two of them — can be found on either side of that home button, providing back and menu button options, though the choice is yours in software as to which each button represents.

The battery in the ZTE Blade S6 is rated at 2400mAh and is not removable.

New phones tend to cost an arm and a leg, but not all manufacturers take the same approach. Some, in fact, deliberately aim for the entry-to-mid range part of the market, an area that’s really beginning to pick up steam due to just how much phones are costing these days, as many brands hit for the above $800 price tag.

Not everyone is willing to plonk down that sort of change, and so companies like ZTE are trying to get in there with models of their own that make a play for the mid-to-high end space, but for noticeable less of moolah.

ZTE’s bizarrely named Blade S6 is one such phone, and while the “S6” part of its name is a little confusing and sounds like a direct play for Samsung, not just because ZTE hasn’t had a Blade S1 through to an S5, the phone appears on paper as a way for people to tackle mid-range with a price that even bests that area.

Pick up the phone, however, and you’d be excused for thinking ZTE had spent time in the design labs with Jony Ive and the rest of the Apple ilk.

Make no mistake, the ZTE Blade S6 looks like an iPhone, complete with a circular icon underneath the screen, a thin softened rectangular slit of a speaker above the display, and with a silver back and small circular camera on the far left on the rear.

That said, it’s a hell of a lot cheaper, with ZTE forgoing the premium metal materials and replacing them with plastic, like what would normally be an aluminium back on the iPhone 6 is a silver plastic back on the ZTE S6.

The glass is still there on the front, but there are no physical buttons, with soft buttons only — press ‘em and they vibrate, with haptic feedback underneath — and blue LEDs simply telling you that there are buttons.