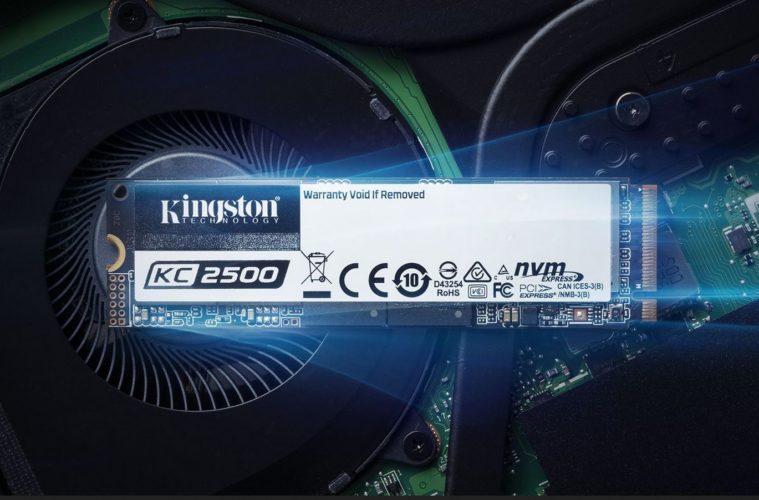 The trick, however, is to use it in computers and laptops with a 4 lane M.2 slot – many are only 2 lanes delivering half the speed.

It is also significant as teh Kingston KC2500 uses the latest 96-lay 3D QLC VNAND (manufacturer is likely Toshiba) enabling up to 2TB on a single M.2. We won’t see higher capacities until 128-layer VNAND is common. Samsung has a 160-layer in the works.

The self-encrypting SSD supports full-security AES-XTS 256-bit hardware-based encryption. It allows the usage of independent software vendors with TCG Opal 2.0 security management solutions such as Symantec, McAfee, WinMagic and others. The KC2500 has built-in Microsoft eDrive support, a security storage specification for use with BitLocker.

Kingston has a five-year warranty. It sells via major IT component outlets like Mwave, Scorptec etc.

GadgetGuy is yet to review the Kingston KLC2500

We have no figures on sustained data transfer rates. Nor is the website forthcoming on cache types or sizes which can make a huge difference to performance. It has a Silicon Motion SMI SM2262EN controller and an unspecified amount of DDR3L cache. We also assume it can dynamically allocate QLC as second-level SLC cache.

We understand that its performance is similar to the WD Black SN750 and Samsung 970 Pro EVO (note the prices in these reviews are out of date), although write performance is a little lower.

It comes with cloning and management software. Perfect for power users.

Arlo Essential Spotlight camera is part of the new breed

Google Pixel 4a – a bit more than a refresh

Samsung Galaxy XCover Pro is a $799 MILSTD, IP68 smartphone with a removable battery