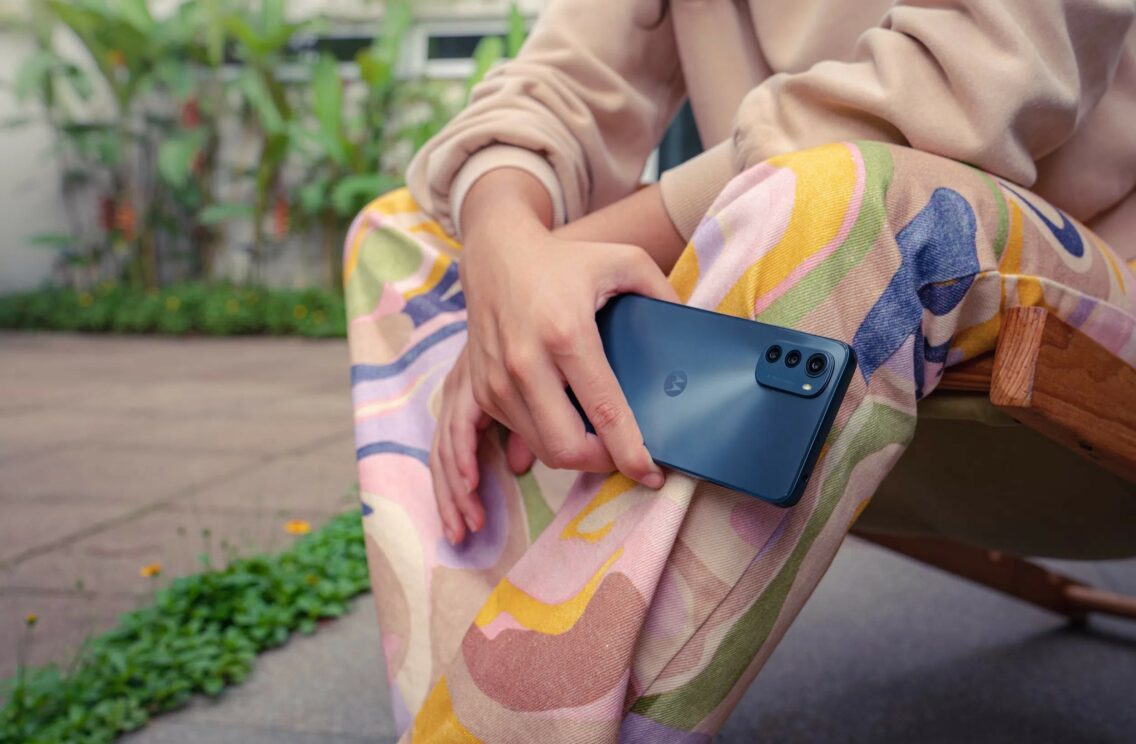 Stripped back to the essentials, the Motorola Moto E32 is designed for those who don’t need all the latest bells and whistles.

While it’s easy to get excited about the latest and greatest smartphones, not everyone’s budget will stretch that far. Even if it does, not everyone needs a flagship powerhouse in their pocket. If you have simple needs, or you’re shopping for someone who does, the Motorola Moto E32 is certainly a budget smartphone contender.

You need to shop wisely for Android smartphones at the $200-ish price point, because you’re right on the edge of cheap and nasty territory. Thankfully, the Motorola Moto E32 doesn’t cross that line and still has a sleek and stylish look and feel.

Featuring a 6.5-inch display and tipping the scales at 184 gm, the Moto E32 has some heft to it but isn’t too heavy or bulky to hold in your hand. Like most Motorola smartphones of late, it has a minimalist look with subtle volume and power buttons along the right-hand edge, along with USB-C at the bottom.

The lack of curved edges gives the handset a slightly boxy look, but the fact it’s a little thicker than some of the high-end handsets means there’s room for a 3.5 mm headphone jack along the top.

As with many of Motorola’s current handsets, the Moto E32 comes with a basic transparent protective case. It’s a welcome addition which offers some impact protection, but doesn’t seem as robust as something like a Tech 21 case.

Remove the case and you start to see where the Moto E32 makes compromises in the name of affordability. The handset features a matte-black polycarbonate back, which looks elegant but doesn’t quite have the same premium feel or hardness and the glass back on high-end handsets.

Power up the Moto Edge 30 and you’re presented with a bright 1600 × 720 pixel IPS LCD screen with a 90 Hz refresh rate. There’s no screen notch for the front camera, just a pinhole, but the fact it sits in the middle of the Android status bar means that it’s unlikely to get in the way.

The screen’s sharpness, colours and refresh rate are respectable, but those with an eye for detail will spot that the picture isn’t quite as sharp as what you’ll find on a more expensive handset. Likewise, the IPS LCD screen isn’t quite as rich and vivid as a mid-range AMOLED screen, which in turn isn’t as impressive as a top shelf OLED screen.

As you’d expect, the Moto E32 is stripped back in almost every way compared to something like the mid-range Moto Edge 30, which itself is a more affordable revision of the flagship Moto Edge 30 Pro. That’s okay, because what’s left is a solid basic handset for those with simple needs.

The Moto E32 runs Google’s Android 11 smartphone operating system rather than the latest Android 12. It features Motorola’s My UX and minimal bloatware, which ensures a clean interface and is likely to appeal to both everyday users and Android fans.

You won’t find a high-performance Qualcomm Snapdragon processor under the bonnet, just a basic UNISOC T606 accompanied by 4 GB of RAM. That’s certainly enough for basic day-to-day tasks, keeping in mind that the Moto E32 isn’t aimed at people who like to push their phones to the limit.

When it comes to photography, the E32 still packs in a triple-camera array at the rear, but it significantly dials down the resolution. It consists of a 16MP primary shooter, a 16MP macro and 2MP depth camera. The front sports a single 8MP selfie camera.

Another concession is that the Moto E32 can only take advantage of 4G LTE and not Australia’s new superfast 5G networks. That’s a totally reasonable compromise at this price point, considering anyone buying the Moto E32 would likely be satisfied with 4G speeds and probably doesn’t want to spend extra for 5G.

The lack of 5G also helps boost the battery life, which is already generous thanks to the extra thickness allowing for a large 5000 mAh battery. You’ll easily go a day between charges.

When it does come time to recharge the phone, you can take advantage of 18W fast charging via USB-C but there’s no support for Qi wireless charging.

The GeekBench 5 benchmarks really hammer home the fact this is an entry-level model, with the phone scoring 312 on the CPU single core test and 1188 on the multi-core. It’s still enough grunt for the handset to remain snappy when performing basic everyday tasks, but it’s obviously not aimed at serious multitaskers or gamers. It’s most likely market is pre-teens and pensioners, as even tech-savvy teenagers may end up hitting its limitations.

When it comes to photography, the Moto E32’s entry level 16 MP rear camera takes respectable photos in decent lighting conditions, with great colours. The sharpness naturally falls a bit short of what you’d get from a more expensive phone and the camera particularly struggles in low-light and/or high contrast conditions.

While it’s not a powerhouse, the Motorola Moto E32 is a surprisingly decent handset which hits the mark for its intended market. It has what it takes to meet the needs of basic users, while forging many of the advanced features that they most likely don’t care about or don’t want/need to pay extra for.

If you have simple needs, or you’re shopping for someone who does, the Motorola Moto E32 sets a high standard in its price range.