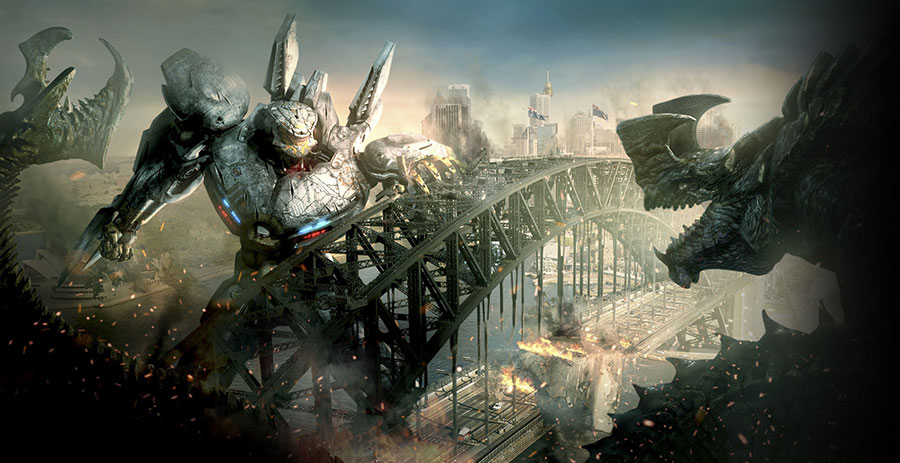 No matter how you look at it, Guillermo del Toro is a very interesting director, especially in the way that he really earned his respect among fans from fairly humble beginnings.

Despite being born in Mexico and becoming very successful with his indie Spanish language films, he seems to have perfectly adapted his style to Hollywood sensibilities.

My first exposure to him was through the amazing Pan’s Labyrinth and the thing that immediately stayed with me was the visually original style that he had, particularly with creature design.

Having a background in special effects, that comes as no surprise, but along with that was a very earnest way of telling stories and a twist of fairytale darkness. This proved to be a great recipe for his first Hollywood flick, Blade II and then later the Hellboy series, both becoming cult favourites.

Now comes a film that has been inevitable since the advancements of visual effects and 3D started consuming the industry.

Pacific Rim aims to be the ultimate monster mash flick, in which the monstrous inter-dimensional Kaiju (translation: ‘strange monsters’) are pitted against humanity’s last hope, the giant robotic soldiers of the Jaeger Program (translation: ‘hunter’).

We are introduced to one of the hotshot Jaeger pilot teams – codenamed “Gipsy Danger” – as they undergo a routine mission to take down a villainous Kaiju.

Charlie Hunnam plays the heroic Raleigh Becket and after some initial misfortune and a five year break, enters back into the Jaeger program just as it’s being decommissioned for favour of building a large wall to keep the Kaiju out. There are only four Jaegers left and it’s up to them to single handedly fight the proverbial monsters at the gate.

What separates the concept of Pacific Rim from standard robot and monster fare is the neural bridge that the pilot team must undertake to operate one of these giant Jaeger robots.

The idea is that it is too much strain for the human brain to control a Jaeger alone, so the mental load must be distributed among two brains, connected and sharing an intensely strong bond.

Raleigh finds his partner in the beautiful Mako played coyly by Rinko Kikuchi, and once the alarm bell rings, they are sent back into the fray to fight the increasing number of Jaegers coming through the portal under the ocean where the monsters are coming form.

Because Raleigh is the veteran and Mako is the rookie, they form a bond stronger than ever seen before in the program.

Beyond these two, Idris Elba is great as general Stacker Pentecost and provides some grounding for the most outlandish characters. There’s also a great cameo from Ron Pearlman and once you see the film, you will believe a man can wear gold plated shoes and still look badass.

It has to be said though, most of the characters are generally quite ridiculous in this film, almost to slapstick levels.

It’s not that they aren’t entertaining, but just a little out of place in the world that we’re watching, where billions have supposedly died and the remaining populous is under constant attack by large angry monsters from the bottom of the ocean.

Also offending our sensibilities are the two ‘Australian’ Jaeger pilots, the father and son ‘Hansen’ team which are actually played by an American and an English actor.

Not since Quentin Tarantino opened his mouth in ‘Django Unchained’ has there been such a stereotypical portrayal of the Aussie accent in film. If you’re going to do Aussie, at least do it right or *gasp* hire an actual Australian, There’s certainly enough floating around Hollywood looking for work.

The Russian team is given similar treatment with the red and whites, complete with an imposing blonde wrestler look.

It was refreshing, however, to see one of these films portray a world united in war instead of the usual American flag waving, so that’s nice.

With those small gripes out of the way we can get to the real reason you’re here: the action.

We could go on about the story, but let’s be honest: you’re not going to see this film for the character development.

The bottom line is the Kaiju-Jaeger battles are as awesome as could be. This is one of the most visually beautiful films we’ve seen in a long time, where every frame has had thought and love put into it, and the 3D is some of the best shown on the big screen.

All you can do is watch in awe as you become a spectator in what is essentially a battle of gods and monsters. You truly get a sense of scale with the Kaiju and the Jaegers, feeling that you’re really watching goliaths duke it out in the Pacific Ocean.

I would also encourage Michael Bay and J.J. Abrams to watch this film attentively and take some notes on how to use lens flares in film, as everything is done with great taste and style, and is a showcase for the highest technical standard in film today.

The Jaegers move realistically slow and controlled – like machines – while the Kaiju are brutal and animalistic with each one seemingly based on a form of ocean life.

They are all unique and have different abilities, meaning that the battles never get old and you just really want to step into the pilot’s chair and take a swing at one of the dastardly beasts.

There is no frenetic editing and you know where all the players are and what they’re doing at all times, an even bigger achievement than the visuals in my opinion.

The only thing missing really was a bit more explanation and discovery of this futuristic world. The audience is thrust into this strange future after a brief montage and we never really go any deeper.

You’ll see the Jaeger team’s facility and a new Hong Kong for a short time, but the rest of the film is fairly contained to the pilot’s perspective inside the facility and the Jaegers themselves, in training and in battle.

With such an interesting world that these characters live in, it would be great just to spend some more time in it, exploring the effect this world changing event has had on the future.

All in all, if you’re looking for some world class monster mashing action with astounding visuals and immensely engaging action, you won’t have to look any further than Pacific Rim.

If you can, see it in IMAX, if only to see the spectacular battles take place at an almost real world scale, and truly appreciate the scope of what has been created.

Sure, the characters are cliched and the story is predictable, but who cares when you have beautiful visuals and visceral action, with the scale of a Godzilla flick.

Ultimately, if you go in looking for some world class popcorn fare about monsters fighting robots, you won’t be disappointed with Pacific Rim.