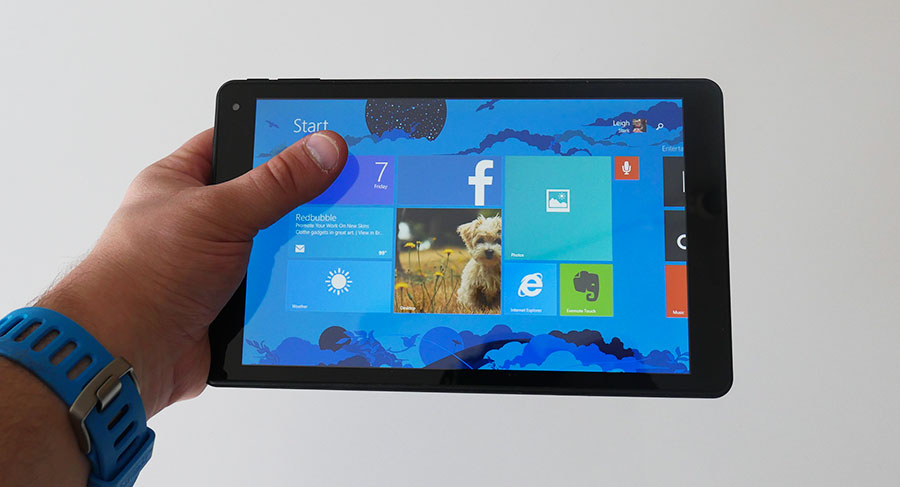 You’ve seen cheap Android tablets, now brace yourself for the onslaught of cheap Windows tablets, starting with the Pendo Pad 8, a Windows 8.1 computer in an 8 inch form factor that can be had for $199.

A new tablet from a fairly new name, Pendo has been found in Australia for at least a year, but this model is the first computer we’ve heard of from the brand to carry Windows 8.

While Pendo computers are generally bargain machines delivering computers and cameras on the cheap, Android slates have generally been the focus, and from what we can tell, the Pendo Pad 8 is the first time Windows has graced a Pendo slate.

For this tablet, you’ll find an 8 inch high definition screen, running the high definition resolution of 1366×768, which in turn results in a pixel clarity of 195 pixels per inch, higher than the Apple iPad Mini without Retina, but lower in pixel count than the Retina-equipped iPad Mini.

Under this screen, Pendo has equipped the Pad 8 with an Intel Atom quad-core Z3735E processor clocked at 1.33GHZ, and running alongside 1GB RAM and 16GB storage.

Connection options are pretty standard for a tablet, with 802.11b/g/n WiFi, microUSB, miniHDMI, and a microSD slot for expanding the storage labelled with the old “TF” moniker for TransFlash (the same as microSD), with a 3.5mm headphone jack also included.

Cameras are also provided, with 2 megapixel shooters on either side, neither with autofocus or flash.

Buttons are also here, with a power button along the left edge, and the Windows button up top next to a volume rocker just to the right of it.

Despite earlier suggestions that the Pendo Pad 8 might have a SIM card slot, we can, in fact, report that it does not.

Need a computer and don’t have a lot of cash? Your options aren’t many, but now that tablets are dropping in price dramatically, slate computers are within reach of most wallets, even the ones that are particularly frugal.

No longer do you need a good $500 or so to buy a piece of touchscreen tech, because right now, you can spend a hundred bucks and grab an Android tablet. A couple hundred more will even net you an Apple tablet, but both operating systems are designed for content consumption, rather than many of the applications that workers need for work and that students may need for school.

For that, you need a desktop or laptop-class computer, such as a Mac or Windows machine, and when you start to talk computers, things get expensive, and we’re back to the $400 or $500 machine tablets used to sit in.

But a recent initiative from Microsoft seeks to change this, cutting the cost of Microsoft installations for manufacturers and bringing Windows to computers for budget prices.

We heard about this earlier in the year, and already Toshiba and HP have chimed in, and so has a local supplier of computers, with Pendo in the picture with its Pendo Pad 8.

If you’re unfamiliar with the name, Pendo is one of the budget computer manufacturers based in Australia with a tendency to release its wares through Officeworks and Target. Generally, the tablets are among the least expensive on the shelf, and cater to being fairly barebones, providing the technology without the frills.

For the Pendo Pad 8, the company has taken an Intel Atom-based slate and loaded it up with Windows 8.1, also throwing in a one-year subscription to Microsoft Office 365 in the box.

From the get go, it’s easy to see the Pendo Pad 8 won’t win any awards for looking good, because, well, it looks so basic. Black plastic on the back, and a glass front, with numerous ports and a few buttons.

It’s a simple and rather generic tablet, and if that’s all you need, that is all you get, so don’t expect a slick and sexy design like Apple and Samsung use with their machines.

In the hands, it’s not much to feel, with just plastic and glass, plastic and glass. The Pendo Pad isn’t overly grippy, but it’s not remarkably slippery either. Your fingerprints will show up on its matte black surface, however, especially if there’s even a hint of grease, which is something to remember when you’re using it.

Clean hands, people, and we’ll get through this.

After this, it gets a little nicer, because when you switch it on, you’ll find an 8 inch 1366×768 HD screen staring at you, which isn’t the highest resolution we’ve seen on a small tablet, but does provide better pixel clarity than some of the 10.1 inch tablets we’ve seen from other companies.

Windows loads fairly quickly, too, thanks to the Intel Atom 1.8GHz quad-core chip from the “Bay Trail” generation, though there’s only 1GB of RAM, and 16GB of storage, and most of that isn’t even available to you.

And yes, the Windows here is the Windows with the tiles of squares and rectangles of sorts, because that is Windows 8. Fortunately, it’s a full version of Windows 8 — not that RT stuff Microsoft uses on its Surface RT and Surface 2 tablet — and that means you can run the apps made for Windows 7 here also, with a desktop mode still here that will take those apps.

But the main tile interface will load first because this is a tablet, and that means using your fingers all over the screen and getting used to that interface.