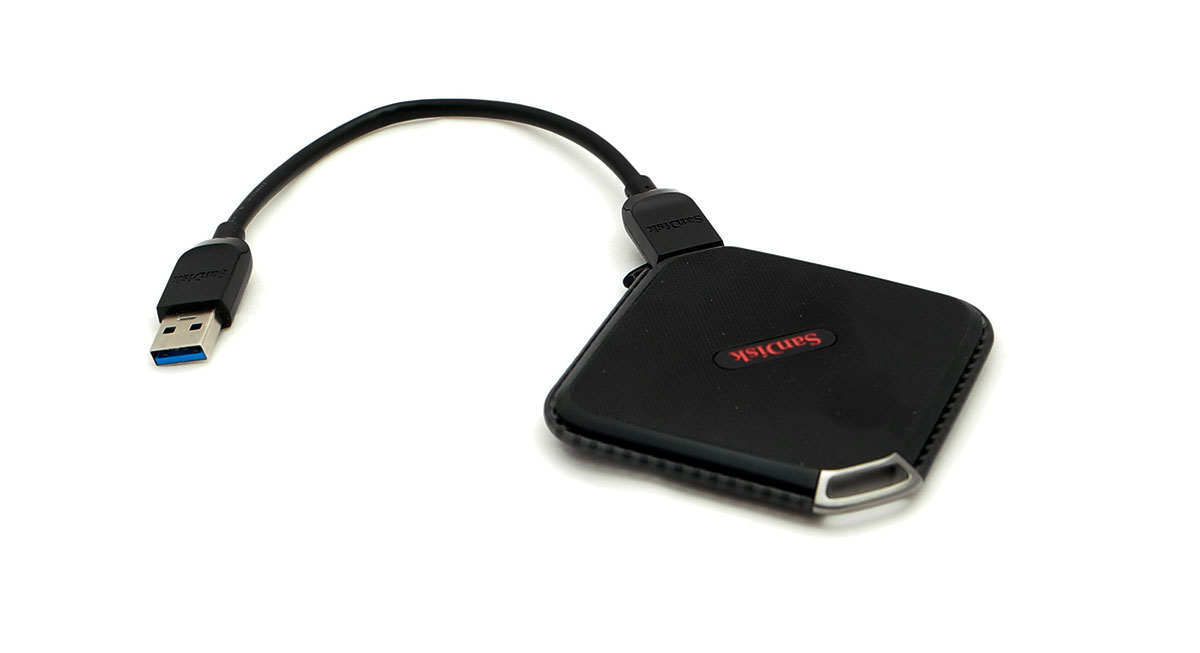 The hard drive is still a great way to backup your data, but it’s not the only way, with solid-state drives also a big deal. Finally, SanDisk has decided to get into the portable solid-state sector, and it’s not just because its rivals are doing the same.

Indeed, the Samsung T1 is likely part of the reason, but SanDisk isn’t new to the solid state game, and we’ve been looking forward to the company bringing its expertise to this sector for a while now.

Is this the competition Samsung needs?

The external hard drive is so common, we’d be surprised if you didn’t have at least one in your life right now, but these generally share two common complaints: weight and speed.

The problem of weight isn’t a huge one. We’re usually only talking a hundred grams or so, maybe more dependent on the size of the drive, but this can still make a dent on luggage.

Solid-state drives, on the other hand, generally weigh next to nothing, with the silicon media and casing generally bringing that weight down to 10 or 20 grams. Often, the cable weighs more, these are that light.

Speed is the more important point, however, with roughly four to five times the speed being offered by a solid-state drive for transfer speeds over their conventional hard drive counterparts, meaning your files will be read from and written to at a faster speed than your traditional hard drive, which should make you a happier camper across the board.

SanDisk’s Extreme 500 tackles both of these and throws them into a small softened square of a device with slight framing in rubber.

The rubber appears to be here in case you drop the device, which makes it a nice addition, though we suspect this is more of a slight element of ruggedisation, especially since the top and bottom lack any ruggedisation whatsoever. SanDisk is probably basing this decision off the fact that most device tend to land on the sides, though the lacks of rubber all around the casing tells us this is probably more cosmetic than total protection.

Still, something is better than nothing, though the silicon board can also probably handle more than a conventional moving part drive.

At the back of the drive, you’ll find one part of this rubber can be pulled away like a door, revealing a USB 3.0 connector.

Plug this in with the included cable and voila, your drive is ready for you to use with your now sting-ray looking external drive.

That’s something worth noting in general, because while some drives require a setup file to be run, the SanDisk Extreme 500 does not, and can be used straight out of the box.

Oh sure, you can opt to use SanDisk’s Secure Access app if you so choose, but it’s not a requirement, so that’s handy.

Regardless of what you decide, the drive is ready to go super fast, and it’s a pretty fast drive all the same.

Moving over 4GB of data took roughly 20 seconds, making it quite fast, and benchmarks suggest write speeds of around 216MB/s for the drive and read speeds of a little over 300MB/s, which is super quick, and not far off what we found in benchmarks.

Tested with Blackmagic Design’s Disk Speed Test revealed the SanDisk 500 was no slouch, running at a maximum of 388MB/s write speed against a read speed of 430MB/s, not far off what we had hoped for.

In fact, running off battery alone, Crystal DiskMark produced a rough speed of between 238 and 296MB/s for reading, while writing was closer to between 193 and 261MB/s.

When our Surface Book test computer was wired and plugged into the wall, however, our tests were a little faster, bumping this up to around 325 to 351MB/s.

All up, it’s not bad, but it didn’t really hold a candle to the Samsung T1 that we benchmark against, with the Samsung beating the SanDisk across the board.

Whether plugged into the wall or running on battery, Samsung’s T1 SSD produced consistent speeds of around 418MB/s read and around 390MB/s write, showing the SanDisk 500 just who was boss.

What is interesting is that while the drive is certainly capable — as revealed by Blackmagic’s test — the SanDisk just can’t compete with the Samsung.

Getting around the benchmarks, SanDisk’s Extreme 500 is still a capable drive, even if it’s not the be-all end-all that it feels like it should be.

We’re also not sure we agree with the door on the back, because it just kind of gets in the way, though we suspect it will assist with that sense of semi-ruggedisation the drive offers.

In terms of file transfer speed, SanDisk’s first portable solid-state drive certainly offers plenty of that, and its value isn’t far off the mark either, but it’s not quite as competitive in speed or value from where its major competition is, from Samsung’s own SSD.

With 240GB fetching a price of $220 from SanDisk and 250GB netting $20 less over on the Samsung side of things (and pretty serious differences at the 480GB SanDisk and 500GB Samsung mark), it’s hard to say “pick the SanDisk over the Samsung” based on the results we’re seeing.

In fact, the one place where we can say “pick the SanDisk” is in the low capacity of 120GB, because there is no 120GB competitor in the portable solid state storage space.

As a result, SanDisk’s 120GB Extreme 500 offers the least expensive entry mechanism for the world of portable SSDs, making it a great choice for people keen to see what the fuss is all about. It won’t stay there for long, though, so unless SanDisk makes some serious changes to its pricing structure, it won’t have much of an edge for all that longer, even as the easiest way to try an SSD.

Overall
Features
Value for money
Performance
Ease of Use
Design
Reader Rating0 Votes
Kind of ruggedised; Fairly fast; Neat design; Can be used out of the box with no setup needed;
Not as fast as the competition; No USB Type C cable;
4