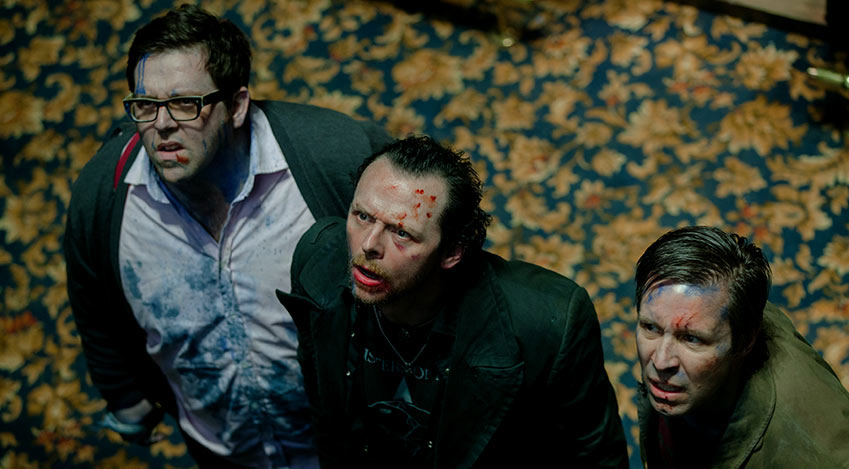 One night. Twelve pubs. Let’s Get Annihilated with ‘The World’s End’, the final entry in the saga that began with Edgar Wright’s Shaun of the Dead over a decade ago.

It is a rare thing in cinema today to see a group of friends who just love making movies to be so very successful, to see films that are not devoid of story or drama but still capture the essence of fun that should accompany the art of filmmaking.

These people are Edgar Wright, Simon Pegg and Nick Frost, and they now bring us their latest British sci-fi comedy creation.

Since the smash hit ‘Shaun of the Dead’ creeped it’s way into cult status barely a decade ago, followed by ‘Hot Fuzz’ continuing the legend not long after, these three friends have brought us along on their journey in creating what has become known as ‘The Cornetto Trilogy,’ named because each film features a Cornetto in some way.

Now, we’re lucky enough to get the final instalment, where the world ends at ‘The World’s End.’

On the surface, the premise here is deceptively simple:

A man named Gary King (played with wonderful belligerence by Simon Pegg) becomes nostalgic for his glory days as a drunken leader of a band of misfits in small town England.

The last time they were together was over 20 years ago, and back then they all attempted ‘The Golden Mile,’ a legendary pub crawl in Letchworth Garden City (home of England’s first roundabout in 1909) spanning 12 pubs.

The only rule for this trek is that you must have an entire beer at each pub to the complete the crawl, shots not withstanding. Their initial attempt left them with a terribly scarring tragedy, broken friendships and the crawl falling one pub short, that final destination being of course, The World’s End.

Now 20 years later, Gary has since glorified this night in his mind as he hits his 40s and realises that no, he’s not the man he could have been.We find him in group therapy and don’t know why, but he’s clearly having some issues. Maybe, though, just maybe he can still reach his potential, if only he and his childhood pals can complete that legendary crawl and finish what they started.

So he gathers up his old friends, and with a bit of the same nostalgia and the old Gary King charm, convinces them to have one more go around, for old times sake.

You may be wondering why so much time is spent on the setup to this fairly simple concept, but you have to understand the rules to the crawl and Gary’s personal motives for pushing so hard. Once the boys are on their way, it is a slow build as each pub presents them with more of their past and eventually a little something that’s out of this world. Gary’s determination in having a beer at each pub despite many unusual obstacles is absurd and hilarious, though, and he really will see it through to the bitter end.. or the lager end.

After the first act, the film takes quite a dramatic turn and we get some more supernatural elements in the vein of the previous Cornetto films, Shaun of the Dead and Hot Fuzz. The characters handle the situation so casually that you can’t help but laugh and agree with their reasoning to continue on The Golden Mile.

We won’t get into spoiler territory here but there is a constant escalation in the sci-fi element to the film and the end becomes quite epic in scale. There are even echoes of ‘The Day the Earth Stood Still’ and ‘The Invasion of the Body Snatchers,’ but really, we’ve never quite seen sci-fi done like this in recent memory.

Although consistently funny throughout, there are moments of genuine drama and suspense, and I found myself wondering and hoping that the boys would make it through, despite the very ridiculous circumstances.

The entire cast is fantastic here, and each member of the group brings different element to the story.

It’s great fun seeing Martin Freeman – arguably the most successful of the bunch of late – delegated to the group outcast, while Eddie Marsan and Paddie Considine actually get to flex their comedy muscles in some funny situations, too.

Gary’s childhood best friend is Andrew, played by Nick Frost, who normally plays the buffoon in these films. This time, though, he gets to play the most straight laced and intelligent member of the bunch, which is refreshing to say the least.

The chemistry between Pegg and Frost is still as strong as ever and it’s hard to think of another duo who work together so well, so consistently, in cinema today. They play antagonists for a great portion of the film, but this serves to give the story the most dramatic edge of the trilogy.

We genuinely feel for all of the characters, most of all Gary who is a train wreck of a man desperately trying to hold on to his last good memory from his youth.

At the core of this film the broken friendship from Pegg and Frost’s characters.

Despite the comedy, the actors play these scenes straight and we grow to genuinely feel Gary’s regret and Andrew’s anger at him for their past transgressions. The journey they go on is essentially Gary’s therapy, and his old friends are his support group. The way we see Gary open up and grow throughout the film helps to make him one of the great loveable despots.

Rosamund Pike plays what could be considered the love interest in the story but there isn’t really a focus on it, which is a wise choice with so much else going on around the group.

As they move on to each new pub, it really is like another part out of a twelve step program, and the tension and emotion escalates all the way to the end.

Not to sell the action short, but there is quite a lot of action in this film, and all credit is due to the actors who clearly did nearly all of their own stunts. The fight scenes are beautifully choreographed and full of an almost vaudevillian sense of energy and physical comedy.

Nick Frost is particularly entertaining during these scenes, and it’s difficult to get tired of seeing him punch through a crowd of people or use a pair of barstools as a makeshift weapon.

The ending won’t let you down, either, and it’s as satisfying as the rest and leaves us in an interesting place.

Just like the rest of the trilogy this is a film you will come back to again and again.

As a standalone film, The World’s End holds it’s own as a wonderfully entertaining and endearing sci-fi comedy.

If you’re not a fan of the rest of the series, you’re still likely enjoy the film immensely. With fantastic performances, epic action, and sharp comedy with a hint of social commentary, it hits all the marks.

For the long time fans, though, there is also another layer of homage and in-jokes that you’ll be looking for, even after several screenings. The World’s End is the perfect finale to the trilogy and like that last bite of a delicious Cornetto, the sweetness will stay with you for hours afterwards.