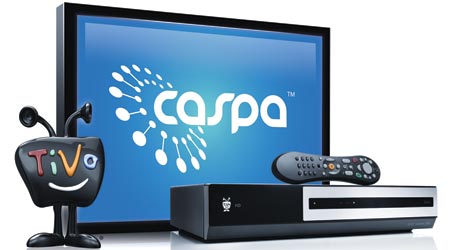 Web-based programming and services from content aggregators is an exciting new entertainment landscape, offering couch potatoes on-demand access to TV shows and movies that aren’t available on the broadcaster’s schedule. Content is downloaded or streamed to a set-top box (or TV or other connected device) using said potato’s broadband Internet connection, allowing them to be able to watch when they want, not when the networks say.

CASPA (Content And Services Platform Asia) was one of the first on-demand IPTV services and, although currently available only via the Tivo media device, can ultimately run on any box that chooses to support it. The Tivo device also doubles as a 320GB PVR whose intelligent search features are matched only by those found in Foxtel’s iQ and IQ2 pay TV boxes, the cost of which is around $100 a month. The Tivo box costs $699 outright – a couple of hundred more than many competing PVRs, including those offering web-based entertainment.

If the relatively high cost of the device the CASPA service is married to is a turn-off, alternative ways to access the service will be available soon (though not all may be cheaper). Hybrid TV, the company bringing CASPA to market and the licensee of Tivo in Australia, reports that CASPA will appear on select net-connected living room devices (TVs, games consoles and Blu-ray players) by Christmas this year.

CASPA, like many online content delivery services, requires you pay money into a digital wallet, which gives you credit to download movies and TV episodes. Movies cost from $4.99–6.99 and TV episodes typically cost $1.99, so pricing is competitive with other services. Some content is free, and all is, for the time being, in standard definition only.

Content is divided into genres, such as Classic, Kids & Family, Romance and similar. TV is similarly divided, and there’s a music category too where you can view clips or entire concerts. All up, Hybrid TV reckons there are more than 500 movies and 2000 hours of television available for download.

Most interestingly, CASPA currently offers a handful of trailers which are streamed in 3D, allowing you to test out your new 3D TV. We’re promised more 3D content from September this year, but with the ink not yet dry on deals between Hybrid TV and the content owners, specific details were not available before this issue went to print. The company did, however, indicate that forthcoming 3D programming will include animations, documentaries, short films and TV shows.

What we’re also promised is advertiser sponsorship of TV and movies in the near future, making them free to the viewer. You’ll be subjected to a number of unskippable ads, of course, but the prospect of choosing a specific sponsor for your evening’s entertainment is interesting.

A Search function allows you to locate movie titles of interest from the CASPA catalogue.

CASPA works similarly to other video on-demand services, such as Telstra’s T-Box and Fetch TV. The selection of content is pretty typical, and pricing is competitive with other IPTV services. During our test period, for example, headline movies on CASPA were the same as those being offered by Foxtel’s pay-per-view on-demand Box Office Channel.

Your viewing experience will depend heavily on the quality of your Internet connection. There is a large number of factors that can contribute to streaming problems, but you’ll have to take them up with your ISP.

Hybrid TV has agreements with a handful of Aussie ISPs – iiNet, Internode, iPrimus, and others – which ensure CASPA downloads don’t count toward monthly data usage limits. No BigPond though, since Telstra has a competing service. Movie downloads will consume 1-2GB each, so if you’re not with an unmetered ISP you’ll need to keep a close eye on how much you watch and what else you’re using your connection for in any month.

Acquiring content is pretty simple. Choose your preferred program or movie from the functional (but slightly dated) interface, and it starts loading. You can play back as the download continues: you just need to wait for the light on the front of the Tivo device to turn blue.

Disappointingly this can take up to 10 minutes, even on a reasonably fast 2–8Mbps connection. Hybrid TV recommends a minimum connection speed of 1.5 Mbps, and even on a ‘best of breed’ 14–20Mbps connection, you’ll need to wait five minutes after pressing okay.

Streaming was pretty ordinary for us via a TPG broadband service – a distinctly stop-start affair, but this ISP is not one of Hybrid TV’s partners for CASPA. In this case, we just had to be patient and wait until the movie was completely downloaded. It took the typical amount of time we’ve come to expect from a file of that size – less than an hour.

In other words, performance is tied to the speed of your ISP connection. This is definitely a service that would benefit enormously from the National Broadband Network!

Some content on CASPA is ad-funded meaning you are served sponsor’s messages in return for receiving free programming.

Choices for a simple, on-demand TV and movie service via your ISP are pretty limited at the moment, and it’s good to have another one in the pack.

As a delivery device for CASPA content, the Tivo box is simple to setup (certainly preferable to the tedious process of hooking an actual PC up to your TV) and, for the premium it costs, provides the advanced PVR and search functionality unavailable from its competitors.

Content-wise CASPA lags some of the opposition, but choice and variety will receive a lift in September, according to Hybrid TV, once deals with four new content partners are finalised. These new alliances, along with CASPA’s migration into devices other than the Tivo, indicate that the IPTV space will be a fiercely contested one. CASPA’s aim to deliver web-based content for free (or at least, supported by advertisers), will be one of the key elements that will lift it from the competition.

Overall
Features
Value for money
Performance
Ease of Use
Reader Rating0 Votes
Renting movies as easy as pressing a couple of buttons; Easy set up; Decent range of titles; Promise of ad-funded content by Christmas
Tivo box more expensive than some rivals; Speed of delivery depends on your ISP; Slightly inelegant interface; Standard definition only
3.4