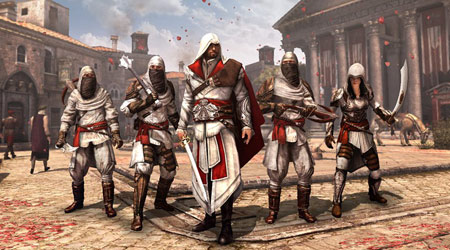 Assassin’s Creed Brotherhood is the most immersive gameplay experience I’ve had this year. The sequel to a slightly disappointing outing under the mantle of Assassin’s Creed II, ‘Brotherhood has benefitted from close examination of the previous game’s failings and emerged as damn near perfect. Casting gamers in the shoes of an assassin is always a good start, but last time, the routine ‘VIP’ assassinations themselves were a let-down, distancing you from the act itself.

This time around, both the way in which you have to approach an assassination and the way they play out are far more engaging. Assassin’s Creed Brotherhood has expertly-crafted pacing, with new abilities, weapons and mission types made available as you progress through the game but introduced in a sensible arc, allowing you to grow comfortable with what you have before a new element is revealed that expands the game, and what you can do in it, even further. New players may even feel slightly overwhelmed with just how much there is to do, so will focus on the tasks that drive the game along, such as destroying the towers, climbing up to viewpoints and unlocking the weaponry but, beyond that, for more seasoned players, there’s an extraordinary array of different distractions: training up apprentice assassins, collecting treasure, searching for the scrolls, renovating the city, and so on that extends gameplay time significantly.

The beautifully modeled and intricately detailed gaming environment is a marvel of level design. I don’t think the average gamer appreciates just how much time and effort goes into producing such extraordinary environments and populating them with credible, interesting activity. It’s a tour de force for Ubisoft.  Combat has improved, including a ‘kill streak’ mechanism that you’ll probably trigger by accident the first few times, horse riding has expanded and can be fun in its own right, and the parkour-style movement of the player’s character is, as always, exquisite; there are some irritating instances of ‘catching’ on the scenery or jumping in entirely the wrong direction but, overall, the simple act of running through the streets and over the rooftops is a delight in itself.

Multiplayer  is not as good as I hoped. Well, it’s fantastic, actually, for the first few runs through, given the requirement to act both stealthily and, when the moment calls for it, quickly and decisively, and is reminiscent of Ubisoft’s finest multiplayer gaming hour, in my opinion, which was the ‘Spies Vs Mercs’ multiplayer element that made its debut in Tom Clancy’s Splinter Cell: Pandora Tomorrow.  But it gets old quickly, since success relies as much on luck as judgment and being killed can feel almost arbitrary.

If you’ve played the first game, you may feel that you’ve seen a lot of this before, but that feeling better be fleeting: Ubi has built on the foundations of last year’s game, true, but the result is a deeper and much more layered experience with a strong story, superbly varied and entertaining missions and tasks, and an almost overwhelming volume of things to do. Graphically, Assassin’s Creed Brotherhood makes its contemporaries look like they’ve jumped into their own Hot Tub Time Machine. It’s one of the best games of the year and truly deserving of the accolades it’ll garner in the usual annual retrospectives.

Max Everingham is the owner of Game State, a B2B videogame software analysis & marketing consultancy. Max is a videogames veteran, having worked in the industry since 1996, including senior brand & product marketing positions at EA and Codemasters.
Overall
Performance
Design
Reader Rating0 Votes
5