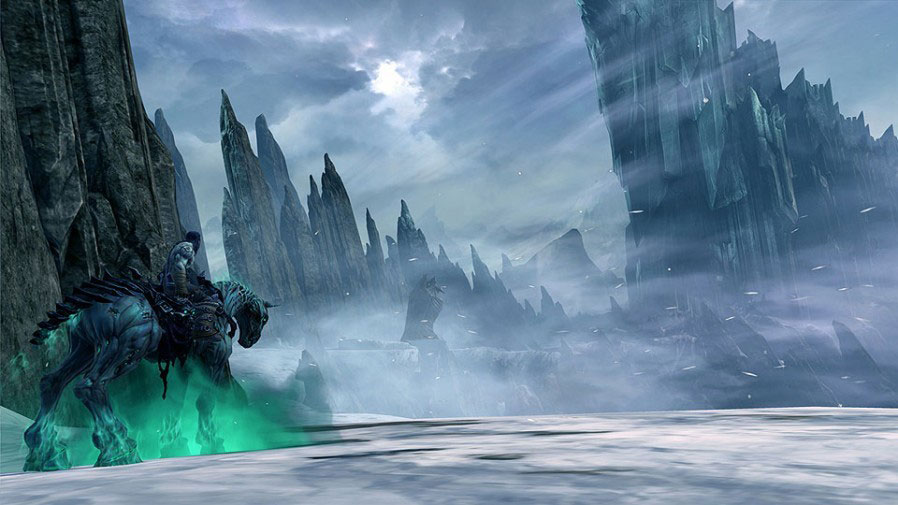 Based around the story of the “Four Horsemen of the Apocalypse,” Darksiders is a lyrical interpretation that fuses open-world style roaming gameplay with ferocious, close-quarters battles. Many aspects of the gameplay call to mind competitors’ titles that reach back some time into video gaming history, but that is to Darksiders II’s benefit, not detriment.

There’s exploring to be done, puzzles to solve, enemies to fight and humanity to save, and you play as Death. How good is that?!

‘Death’ is, perhaps unexpectedly, a fairly engaging character, slightly wimpy in comparison to his enormous brother, War, star of the first Darksiders game, but still impressively built and terrifically agile.

Much like the characters in Prince of Persia and Assassin’s Creed, Death is capable of nimble, fast and acrobatic movement through the game world. When he gets to where he’s headed, Death is most likely going to find himself battling monstrous creations, and handily comes equipped with a scythe as standard, with most conflicts playing out just like those in God of War. A secondary weapon can be equipped and carried at the same time, with weapons categorised as light and fast, or heavy but capable of increased damage.

As you progress, you can upgrade your attacks, and many of them are spectacular, and extremely satisfying.

If we can make one criticism on the combat system, it’d be that there are just too many combos and too many buttons to remember. We suspect that most players will find a few favourites, and stick to them, but then that could just be us.

Just save some space for a possessed weapon or two.

While you don’t actually transform the environment around you, Darksiders II is also strongly reminiscent of the excellent ‘Legacy of Kain’ series from Eidos, whose protagonist was a similarly ethereal wraith-like being with a philosophical leaning.

The narrative weaved around your character, Death, is told in the style of a Biblical epic, with a neat ‘story so far’ recap feature if you return to the game after a save and quit.

For some reason, the giant folk in the game dubbed the ‘Makers’ all have Scottish accents and use silly terms like ‘mayhaps’, which is a little grating, but they also function as a kind of  ‘hub’ where you can stock up on weapons, potions and so forth.

Also, during the narration, important information you’re told appears in purple text, which is a clever way of signalling significant points to players.

The scale of the game world, and the enemies you face, is massive, but we’ve never loved and hated something in a game so much  at the same time as the ‘constructs’. These are giant, stone beings that are endearing and helpful when they’re your friends but fearsomely challenging when they’re your enemies.

Darksiders II offers up a lot of loot but, unlike many other role-playing style games, it also gives very clear indications on how new stuff differs from what you’re already carrying, or have equipped, making the decision whether to swap something out or not a snap.

Darksiders II is also blessed with the best horse in any game, for our money, bursting dramatically from the ground in a blaze of swirling electric-blue light and a snort when you summon it and disappearing in equally impressive fashion when you dismiss, or ‘banish’ it.

And he’s called Despair. That’s cool. How can you not love a game where pressing two buttons banishes despair?!

One of the other, many nice touches of Darksiders II includes a clever navigation aide. If you get lost, or can’t figure out where you should be going next, a push of the left stick on the controller summons a charming little bird named ‘Dust’, who can point you back in the right direction.

Another is a ‘fast travel’ option, which teleports Death to far-flung points on the map in an instant. Riding the horse is fun, but not that much fun!

Overall, though, the game is brilliant. Taking the best elements of various preceding games, the result in Darksiders II is an expansive, reactive, varied gaming universe that everyone in the family will want to play.