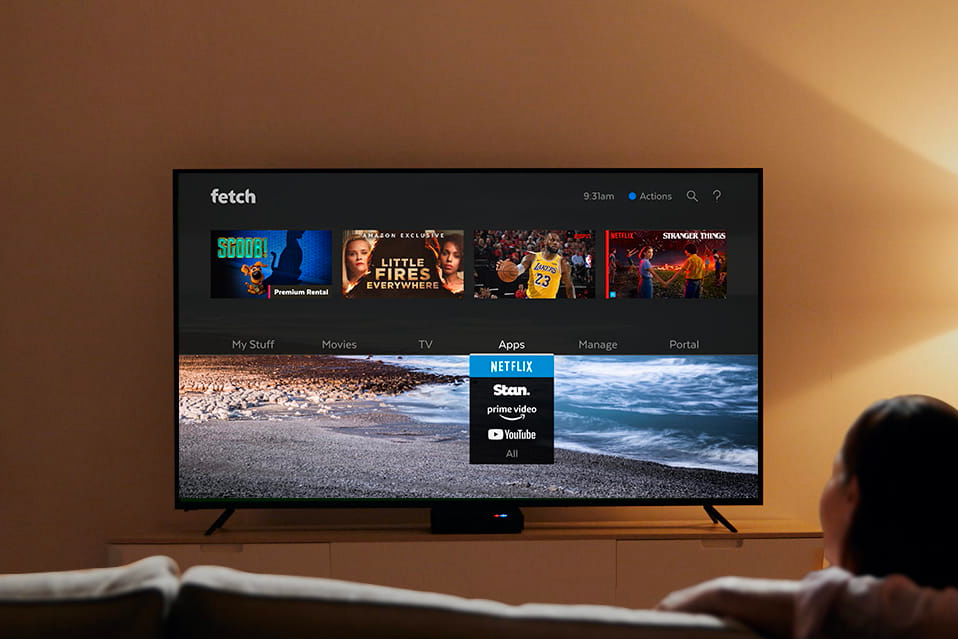 I have been using Fetch TV and a Fetch Box for many years. Fetch TV has upgraded its hardware and software over the years, and unlike other vendors, most new features are available to existing customers.

This review covers Fetch TV functionality and new features available on the latest Fetch Mighty and Mini 4K boxes. We will leave it to existing users if you need to upgrade – I did. We will also look at why Fetch Box is great for anyone who watches FTA (free-to-air) television.

What is a Fetch Box?

Fetch TV is an entertainment platform. Connect Fetch Box to the home network (via Wi-Fi or Ethernet) and the TV (via HDMI) to access all the content below.

FTA digital TV, catch-up and YouTube are free. Other content is via subscription either to Fetch or to the streaming provider. For example, the Knowledge Pack costs $6 per month, and Netflix, Stan, Prime, etc., require subscriptions.

Rent or buy movies or TV shows – you now have a video store in your lounge room with lots to choose from.

Once set up Fetch Box, its remote will control almost all the content (more on that later), including changing the volume and turning the TV on and off.

There are currently three Fetch boxes

The Fetch Mini is a TV tuner (needs an aerial) and up to FHD (1080p) internet streaming. For 4K TV owners for $30 more, you can access 4K content. But be aware that 4K steaming chews up data:

There is a Fetch Box comparison here. The Fetch Mighty has a 1TB hard drive to record up to 585 hours of FTA TV shows. It is handy to have a personal video recorder (PVR) because so many TVs have dropped this feature due to digital rights management issues (DRM). No, you can’t record Netflix etc. Yes, you could use Catch-up TV, but a PVR allows for fast forward at up to 32X speed and rewind.

The Mighty can also stream over the home network from its hard drive to a maximum of three Fetch boxes.

Why we love Fetch

Setup is super simple with easy to follow on-screen instructions.  Fetch has how-to videos straight from their menu.

Why upgrade to a new Fetch Mighty or Mini 4K Box

4K support: A much better picture and sound (up to 5.1 Dolby Digital with a soundbar) than you will ever get at the cinema.

Voice Search: by movie name, a famous movie saying like “I’ll be back”, or find an answer to a problem on YouTube.

Voice is fast, works well and beats traditional methods for doing anything beyond pressing a dedicated button on the remote.

No device available today does everything, whether it be the smart TV or a stand-alone Fetch Box. Fetch’s failure is that for sports fans, it does not currently support Kayo. We can only speculate that Kayo, owned by Foxtel, is a competitor.

If Kayo were supported, the Mighty would get very close to a 10. We rate it higher than the Google TV with remote due to its TV tuning and recording capability

Customers already in the fetch ecosystem can keep their existing box. Then either add a new remote or a new mini 4K box to provide voice control or 4K.

Fetch Box - Mighty or Mini 4K
Features
9
Value for money
9
Performance
10
Ease of use
10
Design
10
Positives
Multiple FTA tuners
Personal Video recorder has ability to skip advts
One remote and menu for all your TV content -voice control and search as well
So easy to use
4K streaming for a great picture
Negatives
Not every streaming service, e.g. Kayo
9.6