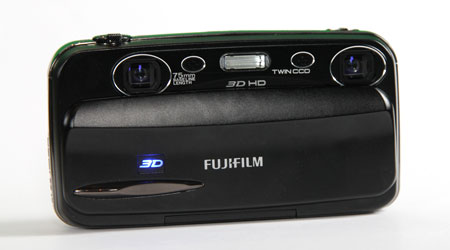 A camera with two lenses that lets you capture and view images in true 3D, without the need for glasses. That’s the promise of Fujifilm’s Finepix Real 3D W3, but does it deliver?

Fitted with a pair of lenses positioned at a distance from each other that emulates that of our own eyes, the Finepix Real 3D W3 is one of the only cameras available today with the ability to snap shots that create a true impression of depth. Not only that, but the camera also allows you to create 3D video using the same technology.
It’s true that Sony makes 3D claims for its NEX-3 and NEX-5, but the technology is implemented in a limited way, being available only for landscape image shooting. On the Real 3D W3, 3D capture is limited only by your imagination.
Key to Fuji’s 3D capture system is the use of two lenses, each with their own 10 megapixel sensor providing different images to each eye. Viewed individually, each eye sees a different image. Together, however, and the image is seen in three dimensions, with the subject matter jumping out of the screen or sinking back further.
And then there’s the 3.5 inch screen, which combines an LCD panel with a lenticular surface technology to display your images and video in 3D, without you having to wear special eyewear. This technology is currently unique to Fuji in the market.
The screen also handles the more pedestrian, everyday viewfinder operations, allowing you to frame and view plain ole vanilla 2D images as well.
The camera comes with a HDMI connection for showing your 3D images on a compatible 3D TV or on Fujifilm’s dedicated Real 3D digital photo frame viewer. It is also supplied with software for viewing video and images on a computer, but we encountered some obstacles with this (see below).

Without the 3D, it’s not a very special camera. Fujifilm has given you 10 megapixels to work with, low-light sensitivity to ISO 1600, and a maximum of 720p HD for shooting videos. The two lenses have 3x optical zoom each and provide an equivalent of 35–105mm.
At 124 x 65.9 x 27.8mm and weighing roughly 230 grams, it’s not the most pocketable of cameras. Despite that, the camera feels very sturdy, with black plastic and metal comprising the chassis, and the glass LCD screen on the back.
Controls are a little bit different from the norm, with a fairly standard zoom and shutter button on the top-right and a 3D image control toggle on the top-left, allowing you to play with how much depth each 3D image has.
On the back of the camera, you’ll find a control wheel for camera modes, with support for three manual modes – Program, Aperture priority and Manual – followed by buttons for switching into video mode, playback, menu, macro, timed-shot, flash, delete, and “3D” which lets you switch between shooting in 2D and 3D.
All of that is pretty standard fare, but there is – outside of the 3D mode – another special feature that makes it unique in the digital camera area. Taking a page from the multiple-lens Lomo cameras, the Real 3D W3 can capture a picture with each of its two lenses offering angles and colour from two different lenses.

To make a 3D images, the camera takes one image from both the left and right lenses, and then combines them.

You turn the Real 3D W3 on by flipping down the lens cover. From here, the camera springs to life with a little sound, an illuminated blue 3D logo on the front of the body, and a splash screen loading up in full 3D on the rear of the camera.
From here, you need only switch the camera into any one of the eight modes and take your pictures. Auto works the best and is the easiest for effective 3D shots, but you’ve also got three manual modes (A, P, M), two scene position modes for various scene types (night, sport, party, etc), and Advanced 2D (A2D) and Advanced 3D (A3D) modes.
The Advanced modes are among the most playful of the settings, with A2D letting you take shots with different colour or sensitivity from each of the two lenses, as if you were shooting on two different cameras at once.
A3D is similar in that you’ll be taking two pictures, but this time just from one lens. Here, you’ll take the two shots that will be processed into a three-dimensional image. In essence, A3D gives you all the power to determine your own level of depth.
Even if you choose Auto, though, you can still play with how much depth each 3D image projects by fiddling with the depth toggle on the top left of the camera.
Admittedly, the whole 3D image creation lark is pretty new to us, but we couldn’t help but admire this aspect camera. It is waaay cool. We were impressed by the images displayed on the screen; our mouths even dropped a little, and for the most part, video and pictures offered the impression of genuine depth – certainly more than what we’ve seen in many other 3D products.
We also had to look straight at the screen, as the lenticular screen lost its ability to display 3D properly when looked at from an angle. Typically, we found that if we held the camera at roughly 20-30 cm (arm’s length) and looked straight at it, the dimensionality was fine. Outside of this, the screen had the lenticular viewing angle problem we’ve come to expect from larger sans-glasses 3D TVs.

The system is not perfect, of course. The sense of depth is lost when shooting subjects at too-close range. It can be a bit hit and miss, much like those Magic Eye 3D pictures where you try to see a 3D shape within a colourful pattern.
Holding the camera can prove tricky too. While the left lens (as viewed from the front) is located perfectly, the right lens is placed too close to the edge of the casing, making it all too easy to accidentally let your finger get in the shot as you hold the camera.
Then there’s image quality: our photos were often blurry and filled with noise. In this regard, the Real 3D W3 performs like a much older digital camera.
We also had trouble exporting 3D video and images to a computer. The provided software should indicate how you watch 3D videos or check out 3D images, but all we saw (on our Mac system) were the two-dimensional JPGs, with no option at all to display stereoscopic 3D images, not even with both channels.
It could be that we needed a 3D screen, but there was nothing to indicate this.
Despite the expectation that the files should be easily read with an SD card reader and a 3D screen, you’ll only be able to view 3D images by either plugging the camera into a 3D TV over HDMI, seeing them on the Real 3D W3’s screen, or grabbing the FinePix Real 3D V1, Fujifilm’s dedicated 3D photo frame ($699 RRP).

The raison d’etre for most cameras to create quality images, but that’s not Fuji’s priority with this camera. The Real 3D W3 is about a new kind of creative photography, and it’s a lot of fun to experiment with. There’s a lot to enjoy here, for sure, but for $599 we’d want a camera that also took good photographs.
Overall
Features
Value for money
Performance
Ease of Use
Reader Rating0 Votes
Take photos and videos in 3D; Playback on a glasses-less 3D screen on the back of the camera; Can be used in 2D mode; Each lens can take a different photo;
Chunky; Image quality is pretty mediocre; Too much depth doesn't work in images; One mode (SP1) reduces the images to 2 megapixels; Included Fujifilm software doesn't see 3D files;
3.4