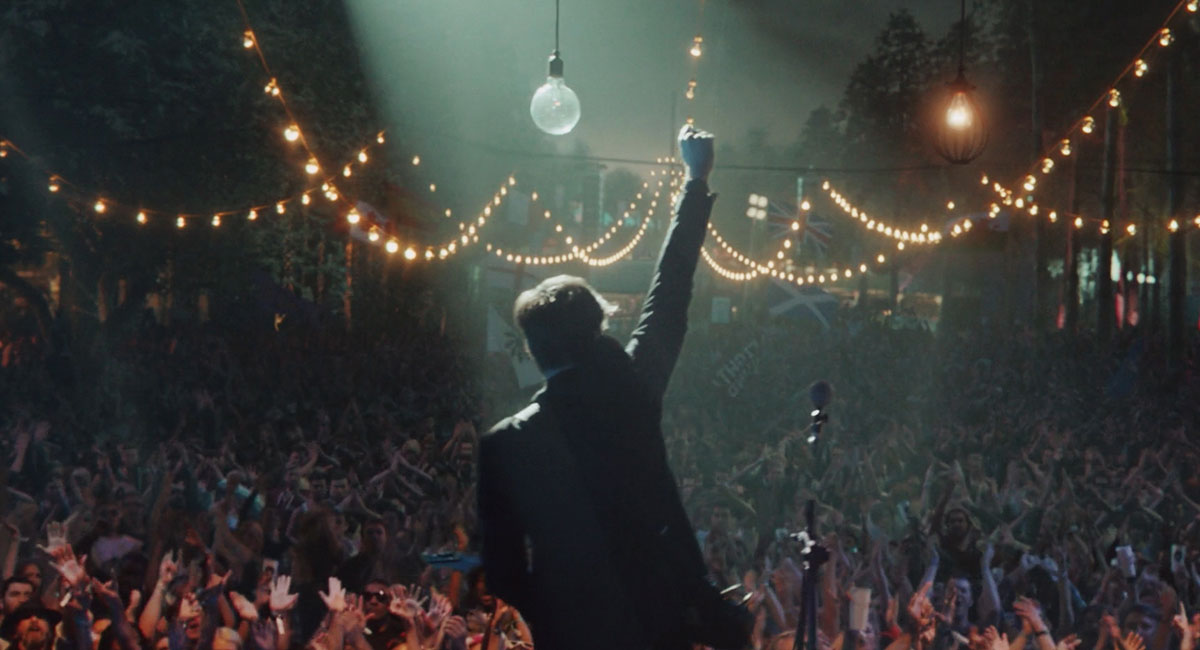 We’ve all had that dream at one point in time: start a band and be a rock star. Unfortunately, most of us will never get to live that dream, but the next generation of the “Guitar Hero” franchise gets close to delivering that experience.

It’s been quite a while since we needed to pick up an artificial guitar, so long that we forgot how much money we had spent on a fake guitar with controller circuits inside. You might even be in the same boat, because almost ten years ago, the music genre in video games was reborn. You could forget about the “Dance Dance Revolution” period that Japan had in its arcades, because American video game companies had a different agenda, and it started with a guitar.

Based on the Japanese “Guitar Freaks” game, developer Harmonix and publishers Red Octane and Activision set out to create a rock-inspired video game where you applied the Dance Dance philosophy of hitting blocks of colour in time with the music on a specialised guitar controller. The concept was easy enough, and paired with the right song, the game play was super addictive, resulting in a game that people jammed to that inspired at least five sequels, several band-specific titles, and a serious competitor that Harmonix created with rival publisher EA in the form of “Rock Band”.

That title took it to another extreme, bringing in not just artificial guitars, but an artificial drum kit and microphones for a band-based team-friendly karaoke session the likes of which no one had ever seen, which the Guitar Hero series also caught up to with its own title “Band Hero”. There was even a game that cashed in on the DJ craze named — you guessed it — “DJ Hero”.

It’s a wonder there was no Cello Hero, Piano Hero, or Bagpipe Hero (though there was a joke about that).

This journalist once wondered if homes would be built with controller rooms just to store the bloody things.

At one point, though, it all came to a stop. Music games lost their appeal, and as the next generation systems rolled in — the Sony PlayStation 4 and the Microsoft Xbox One — gamers quickly realised their controllers not only were incompatible, but so too were the games.

It has been around five years since a new Guitar Hero game rocked up, and yet here we are with something new. Will it make you want to get out the guitar for another concert, or is this just more of the same and likely to be relegated to elevator music?

First things first, let’s get something out of the way, and it’s a something that has basically become synonymous with music games: you will get a new controller with this game, and no, you can’t use your old one. We know, it’s stupid, and we know that more than anyone else, realising there’s a Logitech wooden guitar with buttons instead of strings sitting in a storage spot, while another Logitech slightly better built electronic drum kit takes up space nearby.

Yes, it’s a shame, and those of us with old controllers will probably never spend big on expensive controllers again, but there’s a very good reason why you can’t just bring your old Guitar Hero controller out from hiding, we assure you, and it’s this: the controllers are no longer designed the same way.

While the old design relied on several colour buttons — five, if we recall — traveling up the neck of the guitar, the new controller tries to base its design off the chords guitarists will typically play, with six buttons sitting at the top of the neck, meaning you don’t have to move your hands as much, just change and alternate the grip.

For guitarists, this take on the controller is kind of like how you play a real guitar. For a bassist, less so, but the crux of Guitar Hero Live is about playing guitar in a band, not bass, so at least there’s a good reason for this.

You also can’t just synchronise the guitar with your console, something console owners will recognise as one of those annoying third-party controller issues. Activision includes a small wireless dongle for you to plug into one of the few USB ports your console offers, and this will connect with the controller pretty quickly.

From here, it’s time to get into the game and start rocking out.

A different take on the guitar game, Guitar Hero Live is less about just playing the songs though, a formula worked over by its predecessors one too many times. Instead, Live tries to offer an experience based on what it would be like if you were already part of a successful band.

Forget about trying to scale the heights of a band, playing the pub gigs, because you’re on tour already, and have amassed a legion of loyal fans. Loyal, at least, until you make a mistake, and then they’re ready to turn on your in a heartbeat.

But we’ll get to that shortly.

For now, know that Guitar Hero Live will thrust you into the game with a full motion video walk up on stage. You see the roadies, the band members, you high five, and hear the crowd scream for your to come out. And then, just like that, you’re there: the crowd is waiting for you to play.

Stand in front of the TV and it feels even more real, which we suspect is kind of the point.

Your band members are real and appear to be playing music around you on various instruments, and as you start to strum, following the white and black finger patterns by pressing the controller points and strumming the button at the bottom of the controller, your band responds. The camera shifts and you look at the drummer who cheers you on, and you walk out to the crowd who look up to you and shout and cheer.

And you think to yourself “this must be what life is like as a guitar hero”, which is the point.

You see Guitar Hero Live is less about being another dinky music game and more about a simulation, because when you do well, the crowd cheers you on.

But when you start to miss the notes and play things that are just plain wrong, your crowd won’t think you’re doing a Spinal Tap jazz experience. No, they’ll think you’re just plain being terrible, and will instead shout at you, boo at you, while your camera will shift to the band who will also be yelling at you.

We say “kind of” because unlike a real band, you only ever feel like you’re a cover band since you’re playing the hits of other people, though in the Guitar Hero Live universe, you’re no cover band and are the original, which is all that really matters.

Some context quickly, though, because you’re not playing pub gigs and instead are playing these hit and known songs at festivals around the world. There are songs from the likes of Soundgarden, Kasabian, OneRepublic, The Black Keys, Jack White, Pearl Jam, Of Monsters and Men, Munford & Sons, Paramours, The Rolling Stones, Rise Against, and Arctic Monkeys, among others, as well as some artists that you’ll question quite quickly “are these actually rock, and is there even a real guitar in them?” such as Katy Perry, Rihanna, and Skrillex.

But for the most part, you’re playing rock, alternative, metal, or blues, and you’re pretty much always thrust into it, with the notes appearing on an on-screen fingerboard in quick succession coming at you to adapt to super fast.

When you’re done with the set, you’ll even get a quick verdict on your performance by one or two commentators at the festival you’re at, and to complete this simulation, there are even hashtags that will appear on screen, because obviously it’s not real until social media has documented you.

Overall, it’s a very cool attempt at simulation, even if it’s one that forces you to play music you might not otherwise agree with.

What’s perhaps most interesting about the title is the invigoration you get, and that’s probably from the videos more than simply the playing of the game. Instead of a computer-generated player and a CGI crowd, the full motion videos that adapt to your performance make the game feel that much more real.

People cheer and shout, holding placards up for you, screaming your name. You walk out above them, look down into their eyes, and you accidentally make a several mistakes and they begin to turn. You sweat, the lights blink, and everything starts to go horribly wrong.

Luckily, you can recover and it won’t be too bad. Hey, there might even be a guest performer coming up next. Awesome.

Outside of the festival part of the game — the one that simulates being a rock star — you’ll find you can play to songs you like in music video form, and you can buy points to play these whenever you want, or tune into a more MTV-inspired portion of the game: Guitar Hero TV.

With an internet-connected console, you just merely need to start this up and you’ll be able to join in on a constantly running multiplayer session with songs picked by the system. It can be fun, though again, if you don’t like the music, it can feel a bit draining, hence where the whole “buying points to play whenever you want” logic comes into play.

The controller is interesting too, and we started this review not terribly enthused by its bunched up controls only to have it grow on us. Some of the combinations can be a little fussy to get right, and depending on how the game is synchronised to your sound system, it can even go out, making it difficult to get the combinations right, but overall, it’s a nice change from the colourful guitar options.

Unfortunately, you can’t just bring your controller to one of the other versions of the game.

For instance, the Activision makes an iPad version, and while it would be logical to make the controller work across platforms, it does not.

Ah yes, that old chestnut again. It appears we meet again likelihood of owning excess useless controllers. Won’t you ever go away?

Not getting past the cut scenes in the beginning can also get tiresome, simply because if you end up making a real mockery of the scene and want to try again or fail and need to try again to get past the music, you’re stuck behind 30 seconds of filler material that seems like a bit of a waste.

But Guitar Hero Live does continue to be tremendous fun despite the odd failing it has. We don’t know how long it will stay that way, mind you, but for now, we’re having fun being in our fake rock band. It might even inspire us to return to music. Who knows.