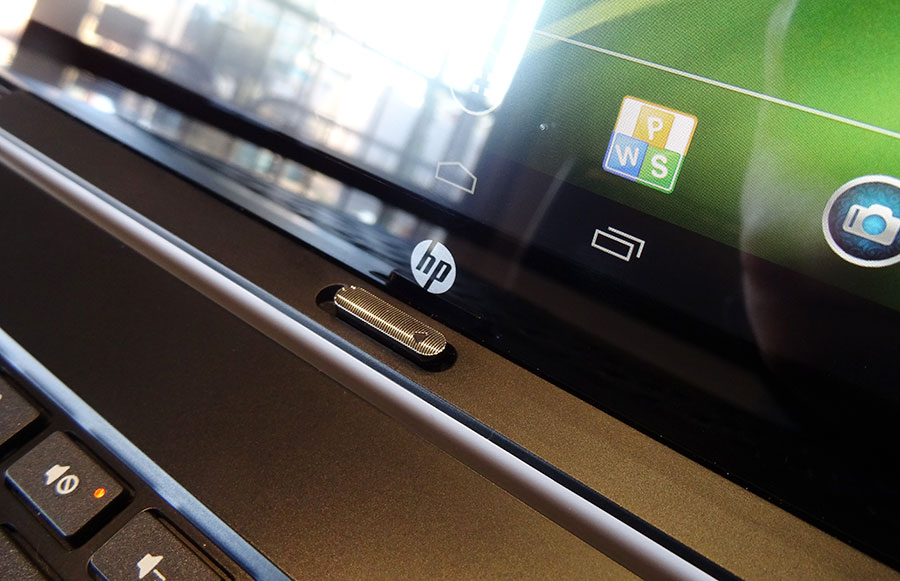 HP’s included mouse in the tablet section is also quite good, even if it is very thin.

You do get a lot of width for it, roughly as wide as the space bar, though it’s out of alignment with that key, and it supports some gestures, in case you find the method of zooming and scrolling using a touchscreen a little strange.

Even the battery is ok, and we found quite a few hours of life here, no doubt thanks to the extra battery inside the keyboard dock, which recharges the tablet when it’s plugged in. Overall, we found life of around 6 to 10 hours, but in fairness, it did stay on standby for much of the time we were reviewing.

Where things get confusing is in the performance department.

You see, synthetic benchmarks rank the SlateBook quite highly, beating out some of the best smartphones out there with a score of 13,524, a mark that we’re not surprised of since HP has elected to use a quad-core NVidia Tegra 4 clocked at 1.8GHz in this system.

Android’s memory sweet-spot of 2GB compliments this, too, and there’s 64GB inside the tablet, with a microSD slot in the tablet section and a SD card slot in the base, making this one storage-friendly system.

But then there’s the real-world performance, which lags ever so slightly when you jump between apps or type.

Indeed, our experience showed that every so often, the system would stall, it would take it a second or two to catch up, even when there were very few apps running.

Web browsing revealed similar concerns, with noticeable lag when we zoomed into pages or scrolled, as the SlateBook hiccupped and seemingly waited for the rest of its parts to keep going.

There’s the problem of having a proprietary port to charge the computer with, and HP should know better. As more and more tablets pick up on the useful international standard that is microUSB, we kind of expect HP to follow suit and not provide us with yet another plug port.

We’d also probably move the microSD slot out from under the tablet and where the dock connects to somewhere in easier access.

As it happens now, you need to detach the keyboard from the tablet just to throw in a microSD card, making it a little irritating to do quick changeovers.

Netbooks may be dead, but HP’s SlateBook feels like it’s trying to take the place of that style of machine, with a delivery of a computer that acts as both tablet and notebook, except for a price point closer to that of budget Ultrabooks.

It’s not that the SlateBook X2 is a bad computer, though – it’s not – but with a suggested retail price of $749, it’s hard to recommend, especially since Windows 8 feels more useful than Android, and you can find similarly priced machines with that operating system on them.

If you love Android and the idea of a tablet netbook hybrid, this is a great option, but for a new computer, we’d be looking at all our options for this price point.