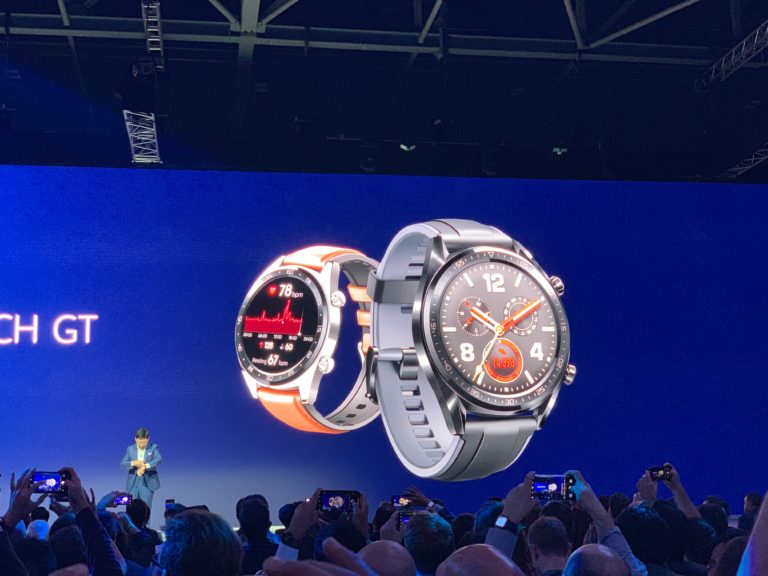 While the Mate20 Pro series of phones was the star of the show, there were a few other announcements at Huawei’s London based launch.

First, Porsche Design is taking the Mate20 Pro to the next level with a race car inspired version, called the Mate20 RS. Complete with leather racing stripe running along the back of the case, the Porsche Designs variants have all the goods on the inside, and a higher price tag to match. While we’re not sure if or when it will be sold in Australia, the pricing ranged up to a lofty 2000 euros for the 256GB model. You can choose from a racing red to a sleek black, and both come with a leather case and cover.

On the watch front, Huawei announced its Watch GT. Coming in a traditional watch configuration, the GT also boasts an amazing 2-week battery life and real time heart rate monitoring. It’s also water resistant up to 50 meters, making it possible to both swim and scuba-dive while wearing it. The GPS enables an open-water tracker, however it doesn’t appear that there is a version with a SIM or cellular connection. The jury is out if it will arrive on our shores.

Last but not least, Huawei showed off its Mate20 X. This is a ‘supersized’ Mate20 smartphone, and comes with a huge 7.2 inch OLED screen. Designed for content consumption like videos and games, it has an enormous 500mAh battery, but no reverse charging like the Mate20 Pro. There’s clever heat management with a Graphene Film and Vapour Chamber cooling system. You can also use the M-Pen to sketch and write on the device, and it comes with the same 40 megapixel ultra-wide-angle Leica triple camera system, found on the Mate 20 series. No word on if it will be sold in Australia as of yet.