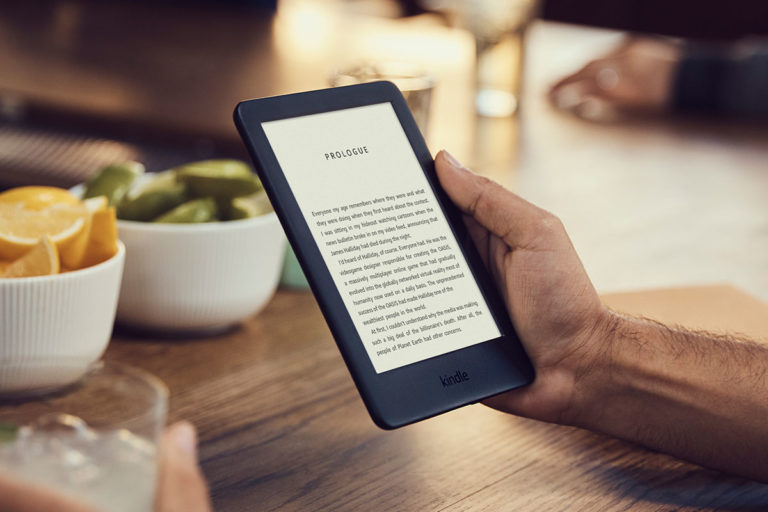 Okay, we’ve already reviewed the best of the Wi-Fi Kindles, the current Kindle Oasis. But what if you don’t have $399 (or $449) to spend on it? So let’s look at the entry level Kindle. This, it turns out, is the tenth generation of said Kindle.

What the Kindle does

Priced at $139 from Amazon (where else?), it is similar in most ways to the Oasis. But it has a smaller, lower-resolution screen, much less storage and it isn’t waterproof. I’ve covered the Kindle eco-system and the ways you load up your Kindle with books in the earlier review.

In short, though, the Kindle is a great way to read books … so long as they don’t require colour, since all Kindles have grey-scale screens, not colour. You can get books by buying them from Amazon (some are free), which are in a special Kindle file format. But you can also load it with, and read, text files, PDF, MOBI (unless they’re locked) and PRC files. You can also convert HTML, Word documents and several graphic formats to load. If you buy something from Amazon, it automatically loads onto the Kindle when it’s connected to Wi-Fi (2.4GHz only). But you also get a special Kindle email address so that you can send any of those other documents to it (via Amazon). Those files that need conversion are automatically converted along the way. You can also load in stuff via USB. There is no cellular version of this model.

The only button on the standard Kindle is the on/standby button on the bottom edge, next to the micro-B USB charge and communications port.  There are no page turn buttons. You tap on the right side of the screen to advance a page, the left to go back a page and at the top to bring up a toolbar of options. Read the Oasis review for more details on that.

And its storage capacity is … um? Apparently, Amazon is upgrading that right now. The review unit has 4GB of storage, and when I checked the website a couple of weeks ago, that was it. But as I’m writing, right now the capacity is listed as 4GB for the white version and 8GB for the black.

Even when they were all 4GB, Amazon said the capacity was “thousands of books”.

I’ve got about twenty books on the 4GB Kindle and settings shows that they’re using 118MB, leaving 2.64GB free. When I plug the Kindle into my computer I can inspect its contents. The complete Harry Potter collection, which is in Kindle format since I purchased it from Amazon, comes to about 3.3MB. That’s six novels. Doing the division, it’s clear that you can easily fit more than four thousand books into the smaller Kindle. If you get the 8GB version – it’s the same price – I expect that just about all the extra 4GB is available for storage, rather than having a chunk of it used by the system.

Like the bigger model, the Kindle supports Bluetooth. You can connect a Bluetooth speaker or headphones to it. It can then use the “VoiceView” screen reader to tell you the story.

It is exceptionally easy to use the Kindle. Load some stuff onto it, or not if you want to get started straight away. The operation manual is, of course, an ebook already loaded on the Kindle. I found that I had to tap a touch harder and more certainly for page turns than I did with the Oasis, but I soon forgot about that and it all went naturally.

I’ve already indicated that the use of only four backlighting LEDs seemed to have no effect on the evenness of the screen. Unlike the Oasis, the backlight is not auto-adjusting for ambient light. So if you’re outdoors, you should just drag the light down to zero. It makes no real difference to your reading, but you’ll extend battery life. The screen uses no power to hold its display. It only uses power when changing the display. And, of course, the electronics and lighting behind the screen also use power. When switched off, the screen shows a nice graphic. You also don’t get the warm light adjustment available on the Oasis.

All the other good stuff is there. Come across a word you don’t understand? Touch it and you will get a definition from one of the dictionaries already on the Kindle. You can jump to a chapter, a “page” or a “location”. That last is a numbering system the Kindle uses to keep track of things, given that the page you see will depend on things like font size, and accordingly have little correlation with a specific page in the physical book.

As for legibility, it was to my (reading-glasses-wearing) eyes very little different to the Oasis. At the smallest font size, the characters were actually slightly larger than the same setting on the Oasis, by around 4.7%. At that setting, you can see around about as much on a “page” as you would with a typical pulp paperback. I usually had the text a fair bit larger. But I wound it down to take comparative macro photos. Here is the Oasis up close:

And here is the standard Kindle up close:

As you can see, there’s no real pixelisation to be discerned on the Oasis display, whereas there clearly is on the entry-level Kindle. But you’re going to need super-hero eyes or a macro lens to be really aware of it.

I can’t understand the 300ppi specification of the Oasis. It seems to be significantly higher than that. At least twice, I’d estimate. Compare the sizes of the pixels between the two. You simply can’t see pixels on the Oasis. Note: I took both photos with the same prime lens (a 60mm Macro on my Panasonic GH4) at the same distance). If the pixels were merely a little less than half the size of those on the Kindle, they should have been clearly visible.

One of the cool things about the Kindle – any model – is the Whispersync technology. The idea is that even if you have several devices, any book you install on one will be automatically installed on the others. Likewise, if you get to location 702 in a book while reading on one device, if you later resume reading on the other device, the Kindle will advise you of the most recent reading location on the other device and ask if you want to jump straight to it.

I almost got caught by this. I received the Kindle shortly before leaving for a ten-day trip, so I did a quick setup, made sure Whispersync was active in the settings and opened up the book I was currently reading on the Oasis. I also noted that all the other titles appeared in my “Library” on the new Kindle. So I tucked it away in my carry-on and left the Oasis at home. When I later went to the same book on the Kindle, I was a little surprised that it didn’t take me to where I was up to. But the Oasis was several thousand kilometres away, so I couldn’t explore things further.

Then I discovered that only the titles of the other books were on the Kindle, not their text. What was happening? I manually downloaded them (you just tap on the title) while connected to Wi-Fi. When I finally got back home, I checked the syncing and it just wasn’t happening. I checked both Kindles and Whispersync was on in both. Why wasn’t it working?

The solution to Whispersync

After googling around I found that there was also a setting on my device profile page at amazon.com.au. I went there and found that “Whispersync Device Synchronisation” was switched off. I switched it on and then it all worked as it should. I don’t know if that was the default or if I’d somehow switched it off myself.

Whispersync is a wonder. I could leave the Oasis beside my bed and take the Kindle with me wherever I went, and never lose my place. But my experiments suggest that WhisperSync requires both devices to be in communication via Wi-Fi (or cellular, if fitted) to work. So if you’re going to be away from the Internet, it’s best to switch on the one with which you’re travelling before you leave, or connect it briefly to your phone’s access point.

Whispersync also works with Amazon Echo devices, and presumably other devices that support Amazon Alexa. So when I ask the Alexa on the Echo Studio smart speaker to read the book, she picks up from where I’m up to. This is not the Audible version, but a fairly natural-sounding computer rendering of the text.

At my request, Amazon sent down a “Kindle Fabric Cover” ($44.95) with the Kindle. This wakes up the Kindle and puts it to sleep whenever opened and closed. It increases the unit’s thickness to around 13.5mm, but the protection it offers is first class.

If you’re interested, I’d strongly recommend buying a real Amazon one like this one. I was feeling cheap a few months ago and purchased – from Amazon – a lower cost third-party case for the Oasis ($14.00). It’s quite nice … but the advertised auto wake/sleep feature did not work. I should have read the reviews mentioning this. That’s odd, because all it requires is a magnet in the right place.

And that, of course, is the reason I asked Amazon to send a Kindle cover. With the cheap case I was wondering whether the auto on/off thing really did work. Yes, it does. With the right case.

But let’s get back to the Kindle. If you are at all interested in electronic book reading, a Kindle is the way to go. It’s easy to use and easy to read.

The only real danger is that with the ease of purchasing books, you may well find yourself overspending. You can read more about the Kindle, and of course purchase it from Amazon here.