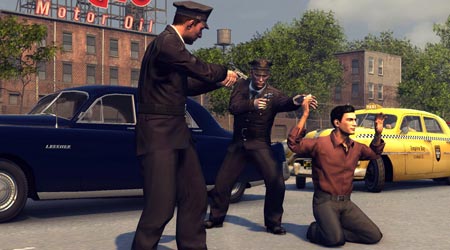 Set in the virtual world of ‘Empire Bay’, the clue is in the name in Mafia II: an action shooter game based on the exploits of immigrant Italian gangsters, Mafia II shares a lot in common with the seminal Grand Theft Auto series.

The protagonist is a recent immigrant looking to make his way in the world but decides he wants to do so more quickly than an honest day’s labour can provide. So, starting with really menial tasks, he works his way up the bad guy hierarchy, with the assigned tasks becoming increasingly dangerous and lucrative. There’s a lot of driving, interspersed with short narrative sections, missions frequently play out as ‘go there, shoot something, escape’ and progress brings better weapons, vehicles and clothes.

If that’s all Mafia II had to offer, it’d amount to nothing more than a poor man’s GTA clone but, in fact, the game does a few things that are, arguably, better than Rockstar’s games. For one, the voice acting is less hammy, for the most part, and the writing more bleakly realistic. The life of an aspiring gangster is mundane and quite stupid, and that’s how it feels here – one of the first achievements is gained for hopping from one gas station to another trying to sell gas coupons for a buck, which is hardly glamorous.

The hand-to-hand melee fighting system is more robust and satisfying – even if the dodge button seemingly only works when it feels like it – and the post-war setting is beautifully realized in both practical and esoteric terms, providing gamers with an apparently-authentic 1950s New York City to explore that also perfectly captures the atmosphere of a city slowly emerging from the various ravages of waging war. For us, this makes the city more appealing than the murkier, dispiriting Liberty City and whether it is actually an accurate depiction is unimportant.

Mafia II’s main campaign is on the short side – 10 or 12 hours – and it’s a linear experience, divided into 14 bite-sized chapters, but the game has nothing like the volume of identikit ‘filler’ missions that GTA sports. So there may be less to do and less freedom in doing it, but in terms of mission design Mafia II is more diverse and interesting, with a tightly-paced narrative that pushes the player along, never in doubt what to do next. Dodgy pathfinding, particularly for the vehicles, can result in frequent and frustrating crashes or police attention, but that currently seems par for the course with such ‘open-world’ games and anyway it’s easy to lose the cops in pursuit. But, overall, it’s a short, sharp experience, much like one of the bullets administered to the head of your enemies in the game, and that brevity is a strength, achieving focus as a result.

Max Everingham is the owner of Game State, a B2B videogame software analysis & marketing consultancy. Max is a videogames veteran, having worked in the industry since 1996, including senior brand & product marketing positions at EA and Codemasters.
Overall
Performance
Design
Reader Rating0 Votes
4