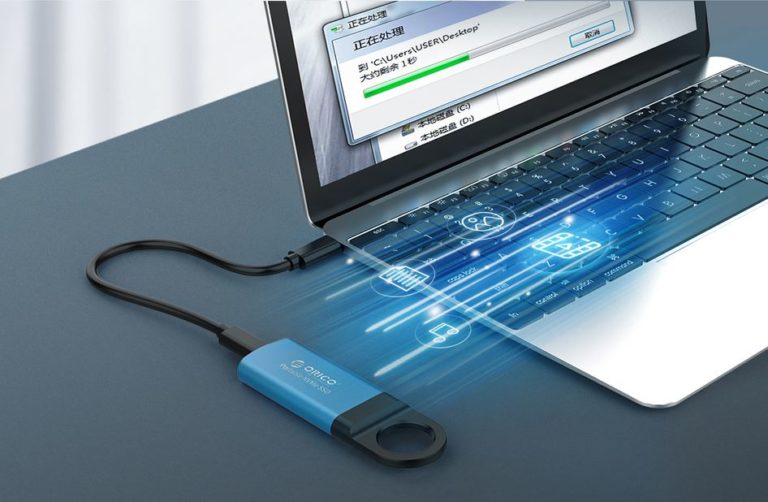 To put that in plain English the ORICO GV100 is a bloody big (well it is quite small), bloody fast (if you have USB 3.1 gen 2) flash drive made for sucking up files. It uses SSD grade flash memory instead of slower and lower-cost eMMC flash.

The maximum speed is 10Gbps which is 1250MB per second. USB-C has overheads so to get over 1000Mbps sequential read is frankly amazing.

We used a variety of devices

* It would not work on either of the two HP Spectre Thunderbolt 3 ports. The readings are from its USB-A port.

** Samsung Galaxy S20 Ultra requires a reformat to exFAT. That is fine.

Now external SSDs don’t have a cache (a bucket of high-speed RAM or SLC cache) to even out data transfers. That is why they slow down as the file size increases. This drive is excellent at copying larger files. The ATTO disk test shows gigabyte speeds for a file size of 256MB.

The HP Spectre Thunderbolt 3 compatibility issue relate to the use of the JMS583 Bridge. It is a known issue and means it works, or it does not. We also tried via a Plugable Thunderbolt dock, and it achieved the same speeds as the USB-A direct connect.

The test unit is 512GB – a larger capacity than most SSD hard drives. It is fast – not as fast as an internal PCIe NVMe 4-lane SSD that should reach 2,000MBps or more but its at least twice fast as any SATA external backup.

Zephyr – a hot gaming mouse for even hotter hands!

In essence, it is an M2.2242 PCIe NVMe SSD drive with a USB-C 3.1 Gen 2 bridge. Its unique feature – it is quite small but in reality it competes with a large number of external M.2 enclosures (usually about $50) that you can add an SSD drive.

As it can have issues on Thunderbolt 3, it loses some points. For USB-C 3.1 Gen 2, it is a very fast drive.

Features
Value for money
Performance
Ease of Use
Design
Small, light and reaches Gbps sequential reads
Can have issues with Thunderbolt 3 ports
4.1