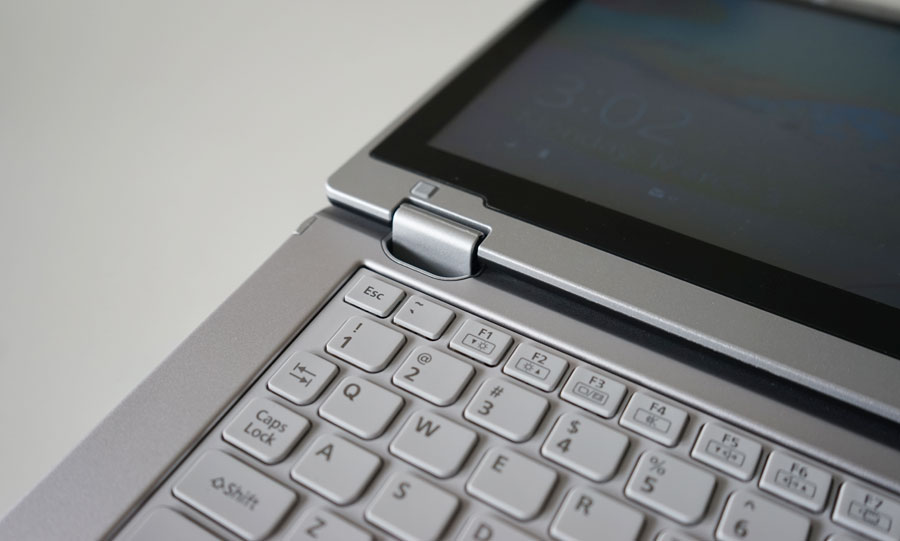 Switch the screen back into the traditional computer design, though, and you can get stuck into performance, which isn’t the best you’ll see these days, thanks to the use of one of the Intel third-generation Core i5 processors, also known as Ivy Bridge.

Before Intel’s fourth-generation “Haswell” processors came along, the choice of a third-generation Intel Core i5 clocked at 1.8GHz wouldn’t have been a bad bet. It’s still not, mind you, but with newer chips that run cooler with better battery optimisation and less fan use, it’s just not as fantastic as the latest and greatest Intel processor.

That said, Panasonic has paired it with 4GB RAM and a 128GB solid-state drive, and for the most part, software we ran seemed to fly with no apparent problems, and multitasking ran without slow downs. The system does have the tendency to get a little loud, that said, with the fan switching on even when nothing is happening.

You may have some issues waking the computer up, that said, as a simple keystroke doesn’t always bring it back to life, so try two, or better yet, the glowing power switch on the side, which always seems to work.

The keyboard, though, is one area that definitely needs improvement.

The keys feel clunky and rubbery as you press them down, the travel is extremely shallow, and overall the entire keyboard experience is just one closer to that of typing on a cheap rubber keyboard.

It’s not helped by the strange placement of some of the keys, and while this is a small laptop with an understandably small keyboard, important keys like control and shift are all very small, too small comparatively, with the right shift noticeably broken up by an oddly placed directional pad.

If you’re reliant on the right shift key, this bizarrely placed set of directional keys will bug you, pressing the “up” key instead of the “shift,” and our typing experience was littered with errors that weren’t helped by this design.

At least the mouse isn’t poorly made, and you’ll find a large trackpad at your disposal, with gestures supported, and two obvious buttons underneath for left and right click. A third button sits in the middle, and while you might think this is the middle click, it’s not, acting as a trackpad disable, so try not to get it confused or your mouse will become temporarily inactive.

Panasonic’s battery also could do with some work, as it only seems to have a maximum of three hours.

Granted, you’re paying for the durability here, so don’t expect the MacBook Air of battery life. That said, three hours is nothing, and in transit, you’re going to want to keep that power pack with you at all times.

According to our Panasonic, we had two batteries in our CF-AX2 unit — one fixed and one removable — and that equated to a maximum of three hours, with all of that spent while writing, web surfing, and checking emails. If you feel the need to get more done on your laptop, expect the battery life in this model to drop very quickly.

Oh, and there’s the screen, which is very flat and lacking in contrast.

Viewing angles for the panel Panasonic has equipped the CF-AX2 Toughbook with are poor — very poor — and make us wonder why a computer with a recommended retail price over two grand has been designed with what is so obviously a Twisted Nematic (TN) panel.

For those playing at home, a TN panel is generally easy to spot, providing terrible vertical angles that wash out colour quickly, requiring you to position yourself and the screen at a specific angle or risk the colours looking weak.

The resolution on offer is certainly decent enough, sitting at the high definition res of 1366×768, but it could be better, and we yearn for a sharper Full HD screen. Maybe next time.

To Panasonic’s credit, it is at least a touchscreen, which makes Windows 8.1 much, much easier to use, and even works as a touchscreen computer without the keyboard when the screen is folded over, thanks to Panasonic’s ingenious convertible tablet design.

Just make sure you position the screen at the angle you need it when it’s folded like a laptop, though, otherwise you’ll be left with washed out colours across the board.

Make no mistake: the form factor, design, and durability are what you’re paying for in Panasonic’s CF-AX2 Toughbook, a machine that will happily survive several falls down the stairs (yes, we tried) and quite a few more crashes to the hard, hard ground.

While the screen, battery, and keyboard all all a touch underwhelming for the package, the build quality is superb, resulting in a machine that isn’t just durable, but is also insanely light and easy to carry with you.

We’ll happily acknowledge that Panasonic has built a brilliantly durable computer here, but it’s one that will take some getting used to.

Overall
Features
Value for money
Performance
Ease of Use
Design
Reader Rating0 Votes
Built to survive most of what you can throw at it; Convertible design is excellent, and you can quickly turn the Toughbook into a Toughpad; Loads of ports and connectivity options;
Keyboard is very small and not terribly comfortable to use; Weak battery performance; Screen has poor viewing angles;
3.7