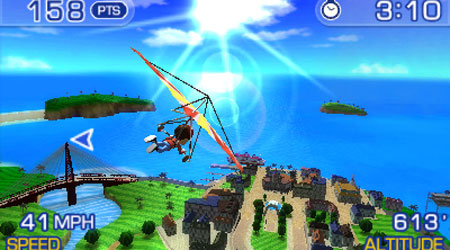 One of my favourite games on the Nintendo 64, Pilotwings 64 conveyed a sublime and relaxing sense of flying that, in my view, has never since been equaled. With its reappearance and shift to the ‘Wuhu Island’ gaming space that features in Wii Sports Resort and Wii Fit Plus, Pilotwings Resort still creates a really lovely feeling of flying, especially when using the slower hang-glider. Better still, given the hardware the game appears on, there is now a 3D effect to the environment and it’s amazing – probably the best of all the 3DS launch titles. There’s a fantastic sense of depth and, while you may want to turn the effect down or even off when using the jet belt or trying to land, no better theme than flight to show it off to full effect.

The gist of the game in Mission Mode is to fly three different types of aircraft – a plane, hang-glider and jetpack-style ‘jet belt’ – around the island completing pre-set objectives, such as navigating through hoops, popping balloons, taking photos, shooting at targets, discovering information spots and then, in many cases, make a good landing. Besides Mission Mode, there is Free Flight Mode, where you can fly around the island exploring without any pressure to complete tasks but still discover items. Bizarrely, Nintendo has opted to give you a time limit in this mode, so you’re always in a bit of a rush to get around.

Each aircraft comes with its own handling challenges. The hang-glider is slow to turn and depends on thermals to stay aloft, so you need to plan ahead as you fly, the plane is quicker with boost and brakes and the jet belt needs careful manipulation of both the force and direction of its jets. You’re graded on your performance and rewarded with bonuses being unlocked, such as extra time to explore in Free Flight Mode, or the option to fly at different times of day, with the island’s appearance changing accordingly (lots of purty lights at night time, for instance).

Pleasingly, the ‘jet belt’ is probably the most easily controlled of the aircraft, and really demonstrates the accuracy and sensitivity of the new analog stick on the 3DS console unit. That is, the most manageable once you get the hang of it, because it really does require a pretty deft touch. You’re given all the controls you need, however: two different jet strengths, a hover, a way of looking straight down past your character’s feet to help with a soft landing.

The party is over fairly quickly, though. Depending on how rapidly you try and burn through the six difficulty levels, there’s probably sufficient content for at least 6 hours of play for most people – particularly if you play Free Flight Mode, which, when you think about it, is on par with most larger console games these days. The only real disappointment with Pilotwings Resort is the dearth of real surprises. There isn’t anything here that you haven’t already seen either in the previous Pilotwings game on N64 or in the Wii Resort titles and there’s no unlockable free-flight ‘birdman’, which is a real shame.

Nintendo’s 3DS has had a shaky start – not because of the hardware, which is a marvel, in my opinion and, even without the 3D effects, a beautiful design – but due to the lack of quality software launched with the new console. However, if you’re not a fighting fan, Pilotwings Resort is the best 3DS game currently available.