Ever since Apple reinvented what it saw was the sub-notebook category with the MacBook Air, computer manufacturers have had to double their efforts to come up with strong competitors. In the latest MacBook Air, Apple is out to show that it still knows what it’s doing, creating the best ultra-light the company possibly can. Is this the laptop you’re looking for?

A new year, and therefore a new Mac. That seems to be the premise for Apple which releases a new MacBook Air mid-year every year.

The latest model brings with it the latest Intel chipsets, and that Mac style you’ve come to know and respect from this lineup.

Under the hood, there’s the very latest Intel processors from the fourth-generation Core range, also known as “Haswell.” The chip in our model if the Intel Core i5 clocked at 1.3GHz and running alongside 4GB RAM, though both of these numbers can be upgraded before ordering to as high as a 1.7GHz Core i7 and 8GB RAM.

Video has also changed, a side effect of shifting to a new processor and chipset generation, and as such, Apple has moved up to the Intel HD5000 set of graphics.

This change of chip technologies is also expected to impact the battery life in a positive way, as it is with all laptops running the new Haswell tech, offering as much as 50 percent more than previous generations of MacBook Air computers.

Very little on this machine has changed outside of the inside bits and pieces, and as such, you’ll find it’s more or less the same machine you’ve come to know, love, and possibly spend hours over at an Apple store trying to work out whether you should fork out the money for the machine.

It includes the same unibody aluminium shell, the same keyboard and glass trackpad, the same FaceTime HD 720p camera, and the same glowing Apple logo on the back.

The ports are all pretty standard for Apple computers circa last year, and on the 13 inch MacBook Air, you’ll find two USB 3.0 ports in black (not blue like normal), one Thunderbolt, 3.5mm headset, an SDXC card slot, and the MagSafe 2 power port Apple uses.

Wireless support now includes 802.11ac, but all the other favourites are here, including a/b/g/n, as well as Bluetooth 4.0 for connecting those wireless devices to this laptop.

Storage options are still the same, with no optical drive or conventional hard drive, and merely the choice of either a 128GB or 256GB solid-state drive, depending on how much you want to spend.

The thin and light MacBook Air as held by one hand (and photographed with the other).

Apple’s products have always stood for quality, and this year’s update to the MacBook Air is no different, bringing with it a few notable updates, but largely keeping the machine the same.

It’s been over a year since we took a professional look at the MacBook Air, and not much has changed, at least from a passing glance.

The design is still very minimalist, and yet very much the same. There’s an aluminium body, soft curves, and a sleek design that keeps the eye travelling along the side. All in all, it’s a sexy machine that is weighted exceedingly well.

Switch it on, and you’ll find the new Intel pieces of hardware still make the performance like a dream. From standby, it’s more or less on immediately, while a boot from cold and off takes roughly 11 seconds, which isn’t shabby at all.

Inside the OS, programs all ran without problems, with multiple tabs possible in both Chrome and Safari with virtually no slowdowns.

We spent some time with Telltale’s “Poker Night 2” for gaming and found the graphics weren’t too shabby, either. That’s not an intense game, mind you, but with Intel’s latest batch of HD graphics on board, we suspect those of you who fancy a game could get some of it done, even if the battery won’t like you all that much.

The battery is interesting, though, and while Apple is quoting a life of around 12 hours, we managed between 9 and 12 provided we weren’t taxing the graphics too much.

Once you begin to use more of the hardware, you’ll find the system drops its life expectancy until the next charge.

It’s hard to say how much, mind you, though with an six hours left, a one hour game dropped us to what Apple said should have two hours left. That’s enough to tell us that you’ll get better battery life when you’re not gaming, a statement that’s true of pretty much every laptop we’ve ever tested.

Sufficed to say, the Air has a battery that – provided you’re writing, listening to music, or watching movies – will survive a flight overseas.

See the two dots to the right of the headset jack? Those are two microphones.

Most of the parts of this computer haven’t changed, though, and while there’s now dual microphones for video conferencing, it’s still mostly the same machine.

As such, the keyboard is one of the best there is (we typed this review on it) and the mouse is another lovely Mac multitouch trackpad. If you’re anything like us, you’ll want to switch off natural mouse movement quickly, but once you’ve done that, this is an excellent input experience.

It’s hard to be critical of such an excellent piece of computing, but we’ve found a way. This is what we do, after all.

The criticism comes down to the competition the MacBook Air has, and while Apple initially led the Ultrabook charge, it doesn’t quite have the edge in screen quality in this area.

It's not a bad screen, but it's certainly not the best screen by today's standards.

Unfortunately, this year’s MBA hasn’t received a bump in screen technology in the way the battery and processor have improved, and as such you get mediocre viewing angles and a resolution that is better on many competing ultra-light machines.

You can find Full HD 1080p on quite a few other thin and light machines, and so while the 900p res is sort of like a half-way point for HD and Full HD, it still doesn’t quite cut it. Not for us, anyway, since this is basically the same display that appeared in the 2011 MacBook Air.

Granted, the vertical viewing angle is the weakest part of the display package, with even the most minor change in viewing position changing the colour in a way that shows the MacBook Air’s screen obviously isn’t in the same league as the In-Plane Switching displays used in other Apple products.

It’s a shame, too, as Apple has put so much work into perfecting every other part of this machine, and for it to falter at the screen is just so, well, meh.

One of the downsides of a low grade display is that you can see that lack of quality by shifting the viewing angle, as seen in this image.

The saying “if it ain’t broke, don’t fix it” has never been more true, and Apple’s tried and tested MacBook Air has merely had a smattering of upgrades, making it the same excellent machine, but with even more impressive parts.

If only the display had received the same attention, we’d be willing to say this machine is “perfect,” but even without an update to the visual front, the new MacBook Air is still an excellent machine.

In essence, it is the lightweight laptop that many a customer is looking for, with a lovely sleek design, strong performing innards, and a battery that lasts longer than any MacBook that has come before it. The price also won’t hold you back, and combined with all the other pluses that make up this computer, it’s an easy recommendation. 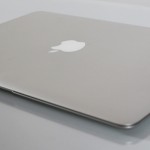 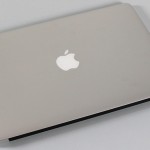 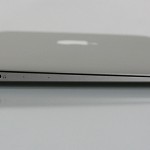 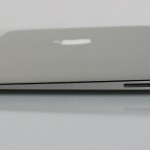 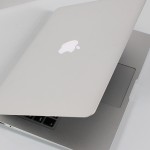 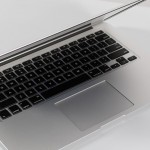 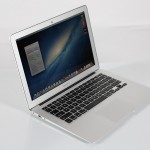 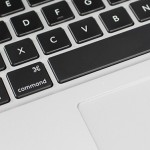 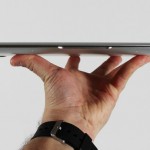 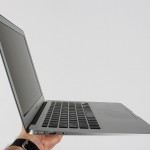 The thin and light MacBook Air as held by one hand (and photographed with the other). 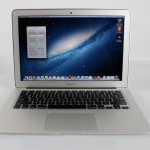 It’s not a bad screen, but it’s certainly not the best screen by today’s standards. 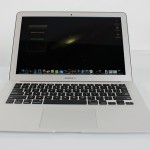 One of the downsides of a low grade display is that you can see that lack of quality by shifting the viewing angle, as seen in this image. 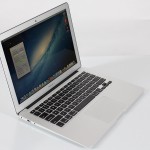 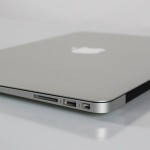 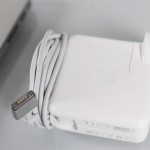