With the look of a classic camera and the innards of something truly modern, the latest Micro Four-Thirds camera from Olympus is one of the best devices we’ve seen all year.

The new top tier camera from Olympus, the OM-D EM-5 harks back to a time when the Japanese company made cameras that looked like cameras, especially as compact cameras these days often look like toys.

Crafted from magnesium alloy, the design is truly retro, similar to models from the OM series Olympus released in the 70s.

A mirrorless interchangeable camera, Olympus has kept the same Micro Four Thirds mount as cameras in the EP range, but improved the sensor, with the EM-5’s new 16 megapixel sensor. The sensor is capable of hitting up to ISO 25,600 for low-light control, pulling in 9 frames per second, and support for Full HD video capturing.

Olympus rates autofocus as among the fastest in the world too, provided the camera is partnered with the right lens, offering 35 point autofocus with 3D tracking.

Aside for the new sensor and retro body, Olympus has thrown in a new five-axis sensor that the camera can use for stabilising shots and video, almost like an internal steadicam.

Olympus has provided two ways of composing images on the EM-5, with a 3 inch touchscreen OLED on the back, as well as an electronic viewfinder just above this.

Above the viewfinder is a hot-shoe mount, with a small data port just beneath it which can power a small flash, like the one that comes with the EM-5. Sadly, no flash in built into the camera.

Each of the two sides on the EM-5 holds a door, with the left side (looking at it from the front) holding the SD card slot, while the right side features AV out and HDMI.

There are several buttons on the camera, with a full compliment of directions for the menu button and its menus – left, right, up, and down – with an “OK” button, trash, info, image playback, video record, and two function “Fn” buttons. An on-off switch sits at the back just under the directionl buttons.

Three wheels decorate the top, with the left wheel setting the mode for the camera – manual modes, iAuto, art, scene, movie – and the remaining two controlling aperture, shutter speed, and switching between the various settings on-screen at the time, including ISO, image order, and image magnification. Underneath one of these wheels is the shutter release button.

An extra button can be found on the front for changing lenses.

With a design closer to a camera from forty years ago, the Olympus OM-D EM-5 is unlikely to be confused with any other camera released in the market today.

From the front, side, and top-down, it looks closer to the cameras Olympus started producing in 1972, part of the company’s OM series 35mm film cameras.

It is, of course, not a film camera, adopting the Micro Four-Thirds sensor size and lens mount, and supporting the wide range of lenses made available by Olympus, Panasonic, Sigma, Tamron, Voigtlander, and Carl Zeiss.

But it does look like a film camera, and with our silver and black review model, we were right back in classic camera heaven, even with the black engraved lettering telling us that this is an Olympus OM-D, a camera that sort of fits in the “OM” brand, even if it is the first digital model.

With this awesome look come an absolutely solid build quality, Olympus building the camera out of magnesium-alloy and feeling like a genuine camera and not a toy. Whether you’re holding with one hand or keeping the standard two-hand grip (left hand under the lens and body, right hand on the shutter and grip), the EM-5 feels very solid and extremely well-balanced. Simply put, this camera feels the way a camera should.

Olympus has even nailed usability, putting two click wheels in reach of your thumb, one around the shutter release, the other next to it. This offers both aperture and shutter control quickly with some solid segmented wheels that feel excellent.

The 12-50mm kit lens is capable of some pretty nice macro images.

There is, of course, a 3 inch OLED touchscreen that you can use for controlling the camera, but this is mostly just for focusing, quick shots, or some of the functions used in the automatic “iAuto” mode. Most menus don’t seem to work with the touchscreen, including the scene and art modes, which require the use of the direction buttons on the rear of the camera.

Most people will use the rear screen as a viewfinder, but if you don’t like the 3 inch screen, you can always switch to an electronic viewfinder offering a 100% field of view, with the rear screen automatically switching off when your eye is close to the viewfinder.

Once you start shooting, you’ll find that Olympus has developed a pretty impressive camera, with a wide range of low-light sensitivity (up to 25600) with some suggestions offered in the manual modes telling you how far under- or over-exposed the shot will be.

RAW support is also offered through the Olympus ORF format, but JPEG is also supported here. Interestingly, in-camera JPEGs weren’t as clear as we expected, but it was hardly anything to cry about.

Once you’ve taken some shots, the image quality capable from the 16 megapixel sensor is likely to impress, with strong colour recreation and sharpness. Low-light sensitivity reaches all the way to 25600, but you probably won’t want to go beyond 12800, as the clarity does begin to drop.

Overall, though, the images are excellent out of this camera.

In a surprise twist, the kit lens on the EM-5 is actually very impressive. In some ways, we were more impressed by the versatility of the 12-50mm f/3.5-6.3 than the camera, which was also excellent.

While it’s obvious that the 12-50mm is a fairly basic walk-around range, roughly equivalent to 24-100mm, there’s also some solid close-up lens control, with some solid macro shooting capable from this lens.

You'll get a range of roughly 24-100mm out of the Olympus EM-5 kit lens, and there's some surprisingly nice detail in close-ups. This is a 100% crop of a flower shot in the Sydney Botanic Gardens.

Three settings are available on the lens, with a simple tug or pull on the zoom ring changing the lens into a manual zoom or an electric zoom, with the electric zoom being slower and more precise, potentially better for capturing video.

The new lens yields some amazingly fast autofocus, with the camera clearing up images so quickly, you’ll be shocked. A zoom from the widest angle (12mm) to the closest (50mm) focused in well under a second. Grabbing macro images of water droplets on blades of grass, the lens and autofocus system had no problems adjusting, working in well under a second.

We can’t validate the claims that Olympus has the “world’s fastest autofocus”, but we can say that it’s insanely fast, and you’re likely to be as impressed as we were.

But not everything is hunky dory, as the camera that feels more like a camera than most models sent our way still manages to lack things that other cameras have.

The flash is separate in the OM-D EM-5.

One of these is a built-in flash, a part that we more or less expect in a top-tier camera, especially one boasting as much technology as this one. To its credit, Olympus does include an external flash that slides into the hot-shoe mount and plugs into the little port beneath it, but it adds a little extra to the size.

We’re surprised Olympus didn’t just include the flash in the look of the pentaprism, a place where most other manufacturers would put a pop-up flash, especially since there’s no real reason why the pentaprism is there in the first place, outside of aesthetics, of course.

If you raise the camera above your head, you won't be able to pull the LCD all the way down.

The tilting screen could also be better, as it just doesn’t offer a whole lot of room to move when you’re raising it above your head. If you plan on taking photos like a waist-level camera, you can position the screen easily so that it sits perpendicular, but you can’t get the same 90 degree angle when you raise it above your head.

If we were shooting in a crowd – and we’ve certainly done this with cameras that have aritculating screens – we’d prefer a camera that allowed to screen to point straight down, instead of at something closer to a 45 degree angle.

While there are a few improvements that could be made, the OM-D EM-5 is a top notch camera, combining some excellent optics, solid colour and image reproduction, and a look and feel that makes it unlike every other camera.

Hats off to Olympus for this EM-5, as it’s one of the first cameras that has made us feel like we’re rekindling our love of photography. Highly recommended. 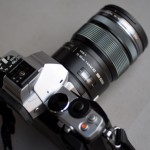 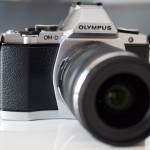 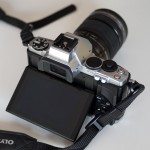 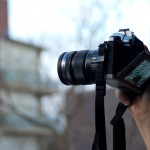 If you raise the camera above your head, you won’t be able to pull the LCD all the way down. 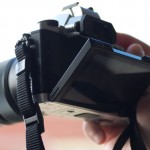 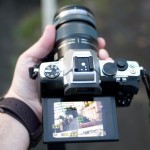 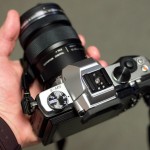 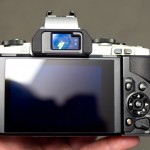 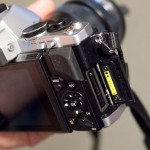 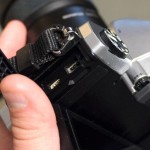 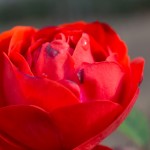 The 12-50mm kit lens is capable of some pretty nice macro images. 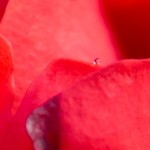 A 100% crop of the flower shot from before this. 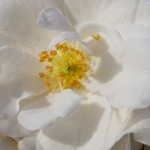 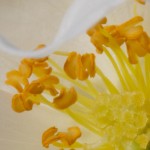 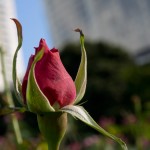 A flower shot in the Sydney Botanic Gardens. 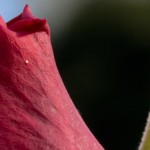 You’ll get a range of roughly 25-100mm out of the Olympus EM-5 kit lens, and there’s some surprisingly nice detail in close-ups. This is a 100% crop of a flower shot in the Sydney Botanic Gardens. 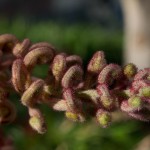 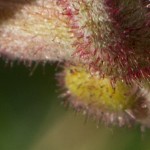 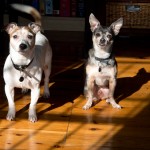 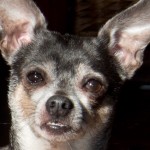 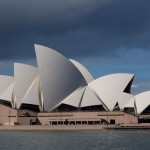 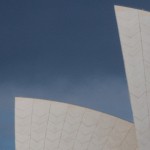 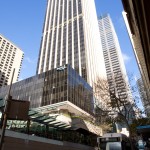 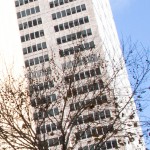 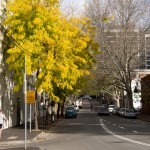 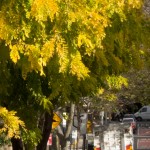 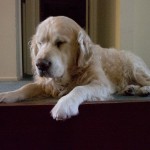 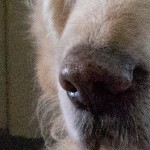 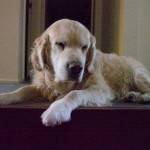 Images at ISO 25600 are less usable, and we’re pretty sure that black & white would be the only good way to shoot images with this high sensitivity setting. 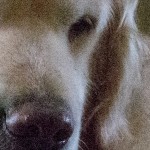 Images at ISO 25600 are less usable, and we’re pretty sure that black & white would be the only good way to shoot images with this high sensitivity setting.

Olympus unveils something tough, something long for 2016

Olympus gives its entry-level OM-D more to work with