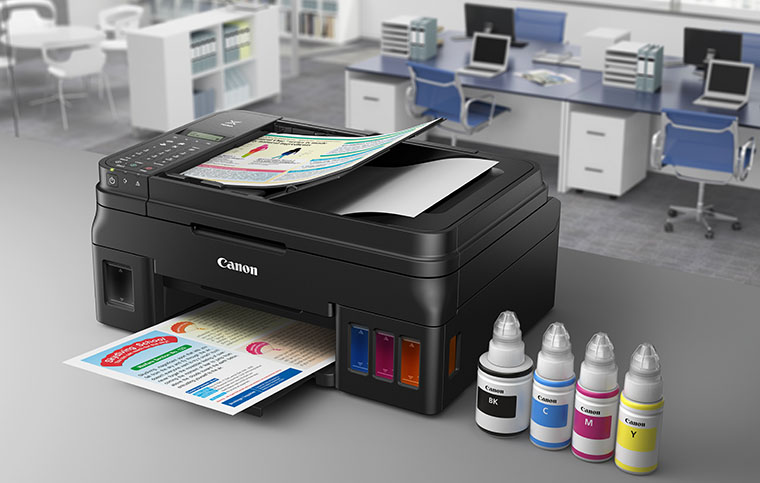 I saw a brand new printer on sale in a supermarket the other day for $19.95. At least that’s what I think it was, although I found it hard to believe. I can imagine the horror of the purchaser when the ink runs out after a ream of paper and they realise how much they’re going to have to pay to fill it up again. But as I discussed in my review of the Canon Pixma G3600 printer, there are now alternatives in which you pay the full price for the device up front, and a normal price for the ink rather than an amount designed to recoup the losses on the hardware itself.

The G3600 was an impressive example of this new breed. But a step up is the Canon Pixma Endurance G4600, which adds some very useful features.

In fact, it seems that the bottom two thirds of the G4600 is almost identical to the bottom three quarters of the G3600. Most of what differs is on top.

The Canon Pixma Endurance G4600 is a full all-in-one office device. It prints. It copies. It scans. It sends and receives faxes. The copying function includes an automatic document feeder so for bigger jobs you can just leave it working away on the job while you go off and do something more productive.

The fax and auto feeder capabilities are new to the G4600. The top section of the device is thicker to accommodate the feeder. There’s also a standard phone jack on the body for connecting up the fax.

The other main feature it has over the G3600 is a full control panel, including a two line LCD display. The numeric keypad allows you to enter how many copies you want. The display gives you a better idea of what’s going on and with its menu system, allows for easier control.

Another couple of features added to this model: WiFi Direct and AirPrint. The former allows direct connection from a smart device without the need for connecting to a regular network, while the latter allows driver-less printing principally from iOS devices.

It’s the bottom half of the unit that’s the main selling point. As with the G3600, it’s all about the ink.

Rather than costing $19.95, or even $99.95, this printer costs $559 ($60 more than the G3600). That’s because Canon likely turns a profit on each unit sold, rather than hoping to recoup the loss and subsequently make its money from the sale of consumables. So you pay more up front, but way less for ink.

The “Endurance” part of Canon Pixma Endurance G4600 isn’t just idle talk. The printer comes with four bottles of ink – black, yellow, cyan and magenta – to fill its four ink tanks. Using the standard types of tests they are rated at 6000 pages for black and 7000 pages for colour. As always, things will vary according to the types of documents you produce. If you’re going to be printing A4 glossy photos all the time, you’re going to get rather fewer than 7000 prints.

But you’re going to get a factor of ten or more prints from one refill than with a regular printer.

To turn it around, to buy enough coloured ink for that other printer to give the same life as the G4600 has out of the box, you’d have to spend over a thousand dollars.

The maximum print resolution is 4800dpi horizontally and 1200dpi vertically. Print speed varies according to resolution, but for documents you’re talking about nearly nine pages per minute for black, and five for colour. A six by four colour photo on glossy paper takes around a minute.

About a hundred sheets of regular paper will stack in the paper feeder, and about fifty in the output tray. The auto document feeder will accept up to twenty regular documents to be copied.

The scanner supports 600 by 1200dpi resolution.

You can connect the printer via USB or WiFi (2.4GHz band, up to 802.11n supported) and both print and scan functions work via the network connection. There is no Ethernet socket.

I did not test the fax function. It took me years, but I eventually managed to convince everyone that I refuse to have anything to do with such ancient technology, and I have no intention of opening that door again, even a crack.

That said, if you do need fax facilities, the G4600 provides them. Its rated transmission speed is three seconds for black and white and one minute for colour. It has memories for a maximum of 19 locations, which the wag in me wants to say ought to cover all fax users in Australia. But I understand their use is common in various professional areas. If you’re dealing with lawyers a lot, you’ll likely find this extremely useful.

I had some frustrating experiences with the G3600 when setting up. Ultimately I was successful, although I’m not quite certain how.

It wasn’t the physical setup. That was straightforward on both. Remove the ubiquitous bits of orange tape that stop things from flapping around in the carton, and follow the step by step instructions on installing the two print heads and filling the four tanks with their ink. This time I didn’t spill even a drop. It just takes a little care.

The problem last time was connecting to the network. I was hopeful that things would proceed more smoothly this time. There was a bump in the road, but it was soon overcome. Rule One of doing this: be patient. Once it was powered up the printer spent several minutes whirring things around inside it (I guess it was pumping ink through little pipes from the ink tanks to the print heads), showing “Setting Up for First Use” on the display. You can set it up via your smart device or a computer. I used the download method on my computer and followed its instructions. The default easy WiFi connection system instantly failed to work. I thought maybe that would scan for access points and ask for a password, but it didn’t seem to do that, so I’m not sure what it was going for.

Anyway, I followed the wizard and moved on to the WPS push button method – push the relevant button on my router and then accept the connection at the printer end – and that worked flawlessly.

It offered to do a test print to check head alignment, and that was fine, and it was done.

Then there was a bunch of software that the system wanted to install, beyond the basic drivers and control software. I decided not to let it go ahead with the software to index photos and make snapshots and whatnot. I’m a manual kind of guy and will use Adobe Lightroom and Photoshop for that kind of stuff. Neither did I install the fax software.

I did allow the quick start menu to install. It plants itself in the bottom right of your Windows desktop and auto starts with Windows. A fiddle with its setting menu stops that, but I have to wonder why printer makers think their devices and software are so important they should default to using up a chunk of their users’ valuable computer screen real estate.

The printing performance was identical to that of the G3600, which is to say very good indeed. I copied a bunch of documents and the colour was a respectable match for the original and, as usual, the built in software tended to clean things up a little, so that the copies could look better than the original.

Colour photo prints on glossy photo paper were superb and may as well have come out of a shop photo printer. Except that you have more control.

I installed the Canon Selphy app on my phone, and that enabled me to print photos directly to the printer (via the network). You can set up the prints, too, specifying paper size and type. I printed out a photo from my phone to high resolution ink jet paper (not glossy) and it looked very nice indeed. Then I copied it using the flat bed scanner to plain paper. At first glance, that mostly looked almost as impressive. On closer inspection some of the dot structure of the print was visible on the copy, and the blacks tended to be a bit mottled. Still, it was remarkable.

Have a look at the G3600 review for more on print quality.

The automatic document feeder worked well and reliably so long as I fed it fairly straight documents and gave them a fan before popping them in. You’re asking for trouble with paper which sticks.

Now you may ask: if the scanner is a flat bed, what kind of complex mechanism is needed to feed the paper onto it the sheet of glass, and then get it off again? In fact, there’s an additional line scanner as part of the auto feeder and it’s this which scans the incoming documents rather than the flat bed.

Finally, when reviewing the G3600 I noted that the printer switched itself off. At the time I thought there was no way to defeat this, but it turns out you can through the printer driver. The setting defaults to switching it off after four hours, and having auto on disabled. Not really wise choices, I would have thought. You can change the switch off time or completely disable it. Or have the printer wake up when data’s coming.

The Canon Pixma Endurance G4600 is a fine, economical and highly usable printer, scanner and copier. No doubt it does the job as a fax machine as well. The price premium over the G3600 is quite modest given the increased usability afforded by the control panel and LCD display, and the auto document feeder turns it into a real office-style copier. Very impressive.