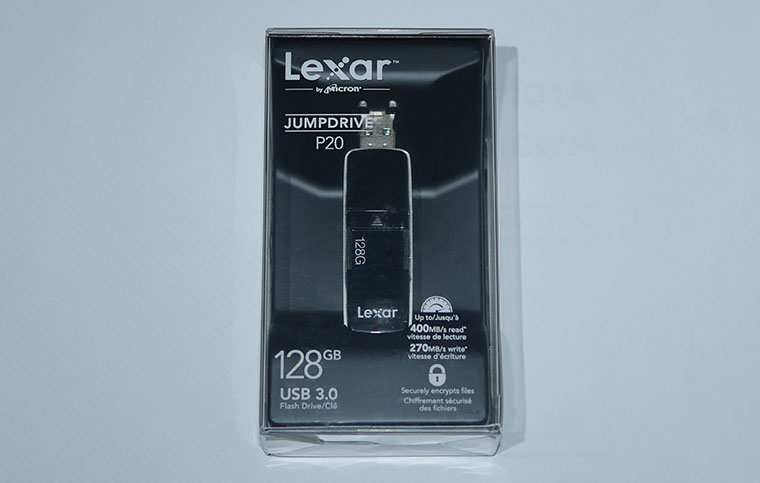 It may seem weird to be reviewing a thumb drive. After all, you can buy sacks of them at your local stationery megastore. Aren’t they about as exciting as packets of envelopes?

Sure, if you want a bunch of them for distributing a few documents and images to friends or business colleagues on the occasional basis. But what if you have big files or lots of them which need to make their way somewhere else physically. Even with the NBN, moving many gigabytes of files around over the Internet can be problematic. For the great majority of us without the NBN, forget about it.

But what prompted me to ask Lexar for a thumb drive to review was speed. Specifically, my disappointment with the speed of so-called USB 3.0 thumb drives. Lexar helped out with a memory stick that is kind of a Rolls Royce. Or perhaps Ferrari might be better, given what we’re about to discover with it. That is, the Lexar P20 USB 3.0 128GB JumpDrive (Lexar’s name for a memory stick/thumb drive).

USB 3.0 is supposed to be fast. It was December 2013 when I decided to buy a USB 3.0 thumb drive, thinking it would be cool to back up some files quickly instead of at the usual crawl. I by then had a computer with USB 3.0 support.

I hadn’t done the arithmetic, though, to see that almost all USB 2.0 thumb drives ran quite a bit slower than 60MB/s, let alone 625MB/s. I bought an 8GB brand name USB thumb drive, plugged it into the USB 3.0 socket and copied some files to it. And it was slow. Just 5 or 6MB/s, or a tenth of what USB 2.0 ought to support!

Other USB 3.0 drives I’ve tried since then have been of varying speeds, but none have been really impressive. You see, interface specification is one thing, but once the data is through the interface it has to be written to memory, and wildly varying qualities and speeds of memory are used in thumb drives. Flash storage tends to be rather slower on writing than reading, so typically these USB 3.0 drives were less disappointing when data was going in the other direction.

The packaging claims for the P20 JumpDrive: 400MB/s read, and 270MB/s write. Well, “Up to” it says. You’d have to say if it went anywhere close to those claims, particularly on writing, that would be pretty amazing.

The P20 is fairly large as USB drives go, measuring 64mm long with the plug retracted, 23mm wide and 11mm tall. Much of the body is metal. The slider for the retractable plug is fairly stiff, and consequently very secure.

The Lexar P20 USB 3.0 128GB JumpDrive comes pre-formatted in FAT32, so it’s widely compatible with computers and portable devices. Macs, Windows computers and both Android and iOS devices can read FAT32 natively. In addition it comes with EncryptStick Lite software which, as the name suggests, can encrypt the JumpDrive to stop anyone from accessing its contents. There’s also backup software. Both work with both Windows and Mac. I didn’t test them since few people are competent to test the quality of encryption software, and I’m not one of them. If I had state secrets that needed to go on a memory stick, I’d look for professional advice.

(Why eject and reinsert? Well, computers typically have between 4GB and 16GB of working RAM, so it’s quite possible that a gigabyte or two of the stuff you’re copying is sitting in there and that the computer will be smart enough to use it instead of re-reading it. The eject/reinsert cycle forces the computer to treat it as a new and potentially different file.)

Time taken for the write to the JumpDrive P20, as best as I could hit the buttons on my stopwatch: 10.83 seconds. The Windows 10 copy dialog indicated a transfer speed of around 270MB/s, right on spec. My stopwatch indicated 242MB/s which is a bit slower. Why? There was a brief pause at the start and end of the copy as the operating system opened and closed things up. Half a second of that in a ten second run time has a significant impact in the calculations. Lexar is right in saying 270MB/s.

For comparison, I also copied the same file to a couple of 8GB USB 3.0 thumb drives I had laying around. One was the original thumb drive which disappointed me, so I’ll call it Drive A and the other Drive B. Rather than a bit over ten seconds, writing the file to Drive A took just under eight minutes (7:57.7). Calculated write speed: 5.49MB/s. The P20 JumpDrive took just 2.27% of the time of that older memory stick. Drive B was a touch faster by perhaps ten per cent, taking just over 7:30. Slow writes are not uncommon.

The read time of the JumpDrive P20? Well (after an eject and reinsertion) I just dragged the file back to the desktop. The Windows copy dialog said 385MB/s for the read speed. My stopwatch said 7.27 seconds, which works out at a touch over 360MB/s. Again that’s the impact of the Windows housekeeping (and perhaps my reflexes in hitting the stopwatch buttons).

Well, that gives a sense or raw speed. It’s possible that the read speed was limited by the write speed in my system (my SSD has a rated sequential write speed of 500MB/s). Remember, too, that we’re getting to the point where the speed limits of USB 3.0 are relevant. 385MB/s is 3 gigabits per second. The USB 3.0 supports up to 5Gbps. An imperfect cable in the computer could chop some time of that.

Read speed on the old USB 3.0 Drive A was much faster than its write speed. Ten times faster. I measured it at 54.4MB/s. So the Lexar P20’s transfer time was fifteen per cent of Drive A’s. Drive B was much faster, averaging 126MB/s, which was still less than third of the speed of the Lexar P20.

Now let’s consider a different scenario: backup. Let’s say one decides to copy all one’s data to the JumpDrive. As it happens I keep most of my music and photos and video in folders other than my Windows Documents folder, so most of its contents are smallish files. Indeed, Windows tells me that in my Documents folder there are 26,703 files in 1,877 folders, amounting to a total of 36.4GB or 39,129,400,841 bytes. When I calculate it out I’m surprised to find that the average file size is 1.4MB, rather bigger than I expected.

How long do you reckon it took to copy them to the JumpDrive? Remember, each file has to be opened and closed which slows down proceedings.

It started off fast. Turns out that there were a few big files in my documents. Who knew? But once it had knocked them over at a screaming speed, promising with Windows well known forecasting reliability a total copy time of 22 minutes, it hit the little files and slowed way down and “Time Remaining” blew out to 4 hours and 45 minutes. And then, moments later, ten minutes. Thank you Windows’ prediction algorithms!

In the end, the transfer ended up being close to early predictions: 25 minutes and 5 seconds. If you want to do the arithmetic, you’ll find that translates through to 24.8MB/s. Slow? Not at all. No USB memory stick is going to reduce the time associated with opening and closing files. But almost all will do the actual data transfer phase of each file slower. Remember, there were over 25,000 file openings and closings during that transfer.

I’m pleased with the ability to copy two decades of writing and associated media files to a USB thumb drive in 25 minutes.

So, yes, you can transfer files very quickly to USB thumb drives. But not to all of them. If speed’s an issue for you, you should look for a memory stick that specifies its speed and be prepared to pay top dollar. The Lexar 128GB P20 JumpDrive would certainly seem to be worth it.