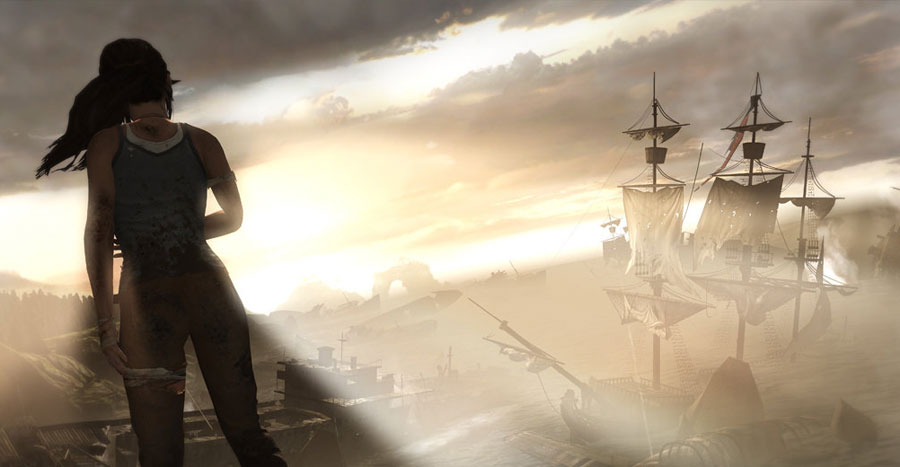 One of the most famous and enduring video gaming icons of all time, Lara Croft or ‘Tomb Raider’ has been given a significant overhaul in this iteration. An action adventure game in which you explore, run, jump, shoot and gather treasures, Tomb Raider is the most exciting and involving release we’ve played this year.

Without wishing to give too much away, the first hour or so of the game is spent guiding Lara into a better spot than her original landing area and getting a bit of background on how she ended up on the expedition in the first place.

The whole time, we’re treated to all sorts of ladylike moans and gasps as Lara struggles along very much in the ‘Die Hard’ reluctant hero mould.

It’s an appealing attitude for the main character in an action title, much more likely to engender empathy than portraying the usual gruff, bloodthirsty and taciturn grunt, but being a Lara Croft game, the developer also ensures that there are plenty of camera angles positioned so you simply can’t avoid looking straight down at Lara’s cleavage.

The game is graphically quite splendid, for the most part, although there are some errant elements.

Lara’s ponytail seems to have a life of its own a lot of the time and the water effects still don’t rival anything like those in Far Cry 3, for instance. However, dramatic backdrops with dynamic scenery such as gorgeous waterfalls or mist-shrouded mountains and dynamic weather and special effects give the game an extraordinary atmosphere.

Every time you pause the game, no matter when, the resultant image on your TV screen looks like a beautiful, carefully hand-crafted screenshot.

In game, this attention to detail persists. Much of the incidental scenery is breathtaking and breakable, strongly increasing that essential sense of credibility to aid in player immersion.

Often, you can then use this to your advantage in the game, such as shooting out pesky searchlights to increase your chances or exploiting cover.

The voice acting in the game sounds very natural, though it’s a pity that the facial animation isn’t up to the job of conveying all that good work.

You hear Lara sounding very much like she’s struggling, really under the pump, but what you see is a plasticky, unexpressive face that just isn’t reflecting the expressed emotion.

Making up for this, however, is the superb orchestral soundtrack.

While there are optional side quests, in the shape of tombs to explore for (ultimately disappointing) treasure, the main game is far more constricted than true, ‘open world’ competitors but this, in turn, helps push along the narrative and keep the scripted action tight and under control.

Speaking of script, points are automatically deducted for making Lara say, just over an hour into the adventure, “I’ve got a bad feeling about this” and, despite hiring a ‘professional games writer’, the overall storyline is lightweight. It’s the typical supernatural guff you find in so many games of the ‘Indiana Jones’ ilk and is instantly forgettable.

The hallmark of the Tomb Raider games is fluid character motion and control and, in that respect, this Tomb Raider is impressive.

Lara is nimble and her unaided movement looks natural, but this is enhanced with certain pickups like the ice axe, which adds the pleasing ability to nimbly scale rock faces. You can upgrade abilities categorized as either ‘hunter’, ‘brawler’ or ‘survivor’ skills, as well as modify your weapons.

Tomb Raider also has excellent pacing. The developer has managed to create an almost perfect mix of high-octane ‘set pieces’ under heavy scripting where you’re only marginally in control of Lara but still have to guide her, or make split decisions to get through, and parts where you’re fully in control of her but you’re much more in exploration or stealth mode to navigate to and through areas.

Masterfully combined, Tomb Raider fairly lopes along keeping the player on his or her toes throughout and there’s a real fluidity to the entire game.

Despite the lacklustre storyline and the fact that the voice talent for another character (Sam) seems to have recorded her entire part in the game under the impression that Ms Croft’s first name is ‘Laura’, Tomb Raider is a hugely enjoyable game with tremendous pace.

The elements of exploration, combat and story sequences are so cohesively interwoven that you are utterly immersed in the adventure, drawing you into the game more successfully than any game we’ve played this year or last.

This ‘reboot’ of Tomb Raider is an absolute marvel of which developer Crystal Dynamics and publisher Square Enix should be extremely proud.