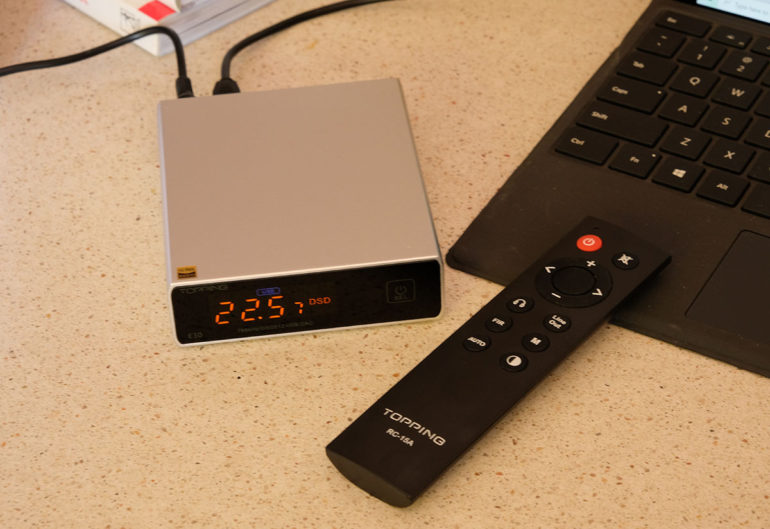 Over the recent break I forked over my own good money to buy the Topping E30 digital to analogue converter. I was decided by need, Topping’s reputation and what seemed to be an astonishingly low price. My goodness, it was worth it.

I’ve been seen the brand Topping mentioned overseas in recent years as a high value proposition for DACs, but I think the brand has only recently become available in Australia. I treated myself over Christmas. Note, Topping’s stuff isn’t all cheap. Its top of the line desktop DAC comes in at well over a thousand dollars. But that was overkill for this job. $239 – it was actually $209 when I handed over my money – was appropriate for the task at hand.

A digital to analogue converter takes digital audio and turns it into analogue, so you can feed it to various active speakers or amplifiers. They are ubiquitous. Your computer has one built in. But for good quality sound it’s better to have an external, high quality DAC.

I have a nice little DAC, priced at around $600, that I normally use for music from a Mac Mini, or whatever. But the Mac Mini is far from my main computer. I have several and for the last year or so I’ve been using on my main desktop – the computer before which I spend most of my time, and to which I have connected an extremely impressive sound system – an adequate, but elderly and somewhat limited DAC. I wanted to upgrade on that, but not spend $600. So that $209 looked very attractive.

What is the Topping E30?

Well, we’ve said what a DAC is. But where does the digital audio come from? In the case of the Topping E30, it can come from the USB connection on a computer or from some device with either an optical digital audio or coaxial digital audio output. The latter two cases – I spent almost no time on these, I should note – that would be things like CD players, network streamers, maybe a Chromecast Audio. But I wanted it for my computer.

In that role, the Topping E30 is a USB Audio Class 2.0 device. Which is to say, it works natively with Macs from quite a few years past, and Windows 10 since the Creators Update (aka version 1703). If you’re running an older version of Windows, you’ll have to use drivers from Topping’s website. And if you’re using an up-to-date version of Windows, you should still use the drivers from Topping’s website. Well, if you’re at all interested in high-end Direct Stream Digital, which is supported by the Topping E30.

What kinds of digital audio does it support? The regular two kinds: PCM and DSD. Now let’s get a sense of the extent of this support. PCM is most familiar from the CD and various DVDs and Blu-rays. With CDs it is delivered with 16 bits of resolution (65+ thousand levels) and 44.1kHz sampling (20-ish kHz bandwidth). With most DVDs it’s 16 bits and 48kHz. Of course the Topping E30 can handle this. Indeed, it can handle PCM signals of up to 32 bits (4+ billion levels) and 768kHz sampling (bandwidth: ridiculous).

Spoiler: I don’t have any 768kHz test tracks, nor any with 32 bits of resolution. But I can confirm it worked perfectly with 24-bit (nearly 17 million levels), 384kHz PCM.

Yes, I have tracks in all those DSD formats. And, yes, they worked perfectly. Using, that is, the Topping drivers. The standard Windows drivers run out of oomph at DSD256, such is the bitrate required.

The DAC chip is impressive: it’s the Asahi Kasei AK4493. By chance, I also have with me – right now I’m listening through it – a high-end DAC/headphone amplifier that employs the same DAC chip. This costs a little more than ten times the cost of the Topping E30.

What don’t you get? What do you get?

The Topping E30 has a pair of RCA outputs on the back for connecting to your amplifier. You cannot plug in headphones. The outputs are standard, not balanced. Unlike some DACs in this price bracket, it isn’t powered by the USB connection. The included power pack will require a mains socket.

What you do get is the stuff important to me. First, there’s a remote control so you do things like select input and (sometimes) change the output level at a distance. And you’ll need this if you want to change the output filter. We’ll return to that subject.

I qualified that thing about output level, because the Topping E30 can operate in your choice of two modes: pre-amp and DAC. They’re pretty much the same, except that the pre-amp mode has a variable output, controlled by the remote, while the DAC mode is fixed in output level. For plugging into your amplifier or audio system, you’ll typically want to change to DAC mode. In pre-amp mode, the front panel display shows the level, switching briefly to the sampling rate and format when that changes. In DAC mode, it shows sampling/format all the time.

That last thing is very important. It’s easy to get the driver setup wrong in a computer. By showing you the received signal, you can confirm that everything’s working properly.

You can use the FIR key on the remote to change the filter on the output. Digital audio requires a filter of some kind to kill ultrasonic sound generated by the format. The AK4493 has six on offer. Have a listen, if you’re interested. Three of them yield similar results. These are “Sharp” filters that allow the maximum frequency response – -0.1dB at 20kHz with 44.1kHz sampling. Two “Slow” filters roll off earlier, and are at -3dB by around 16kHz.

And then there’s what’s Asahi Kasei calls the “Super Slow” filter. It’s simple: don’t use this. This does indeed start rolling off earlier, down by half a decibel at just 10kHz. And it has the aesthetic virtue of showing a really, really sharp impulse response without any ringing … if you like to do strange things like look at impulse responses on oscilloscopes. But achieves this by eschewing any kind of a filter, leaving significant levels of ultrasonic elements in the signal being delivered to your loudspeakers.

I’m allowed up to 300 words under each heading on this system. But I don’t need them. Ninety will do in this section. The sound quality was, well, perfect. I’m not going to go on about “microdetail” and “microdynamics” and such abstruse concepts which are part imagination, part desperation to describe nearly indefinable differences in sound quality. By “perfect”, I mean that what’s in the recording is delivered at the outputs of the Topping E30 DAC with utter accuracy. Any “microdynamics” in the source are delivered perfectly at the outputs.

“Perfect” is, of course, a bold claim. So please allow me to present some measurements and graphs. First, here are the frequency responses of three representative filters with good-old CD-like 16-bit, 44.1kHz signals:

You may see why I prefer the Sharp filters.

But what about noise? Well, here it is:

That’s as good as it gets with 16-bit audio. The measurement figure is -97.8dB A-weighted. Total Harmonic Distortion with this signal was 0.00035% – insignificant.

High resolution? Here’s the frequency response with the same three filters when the unit is fed by 24-bit,192kHz test signals:

I tossed in the response with the same signal of that comparison DAC, which clearly shows a different treatment of the top end. If you think you can hear the difference between the white and purple traces – 0.1dB at 20kHz – then for sure spend a couple of grand more.

24-bit audio should reduce the level of noise. And indeed it does. It was at an astonishingly low -119.3dB A-weighted (the expensive comparison DAC was inaudibly poorer at -118.7dB):

Finally, let’s go nuts with 384kHz sampling. This is the frequency response. And guess what, it’s hardly better than 192kHz. That’s because the AK DAC chip is locked into a “slow” filter at such high sampling rates.

Gadgetguy’s Take – the Topping E30 USB DAC is a steal

I wouldn’t be surprised to see the performance of the Topping E30 DAC in a DAC priced ten times, even a hundred times, higher. As it stands, the Topping E30 is truly a bargain.

We haven’t covered many DACs in the past. But here are those we have.