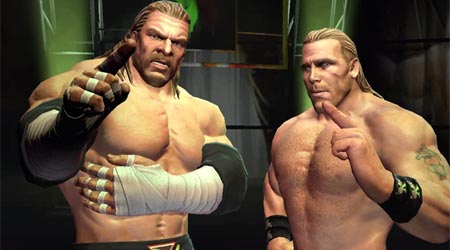 WWE All Stars is exactly how wrestling games should be: exaggerated, overblown and utterly ridiculous – in other words, just like the real thing.

Created by THQ San Diego, originally Midway’s arcade division, and taking its cues from their ‘NBA Jam’ school of videogaming where colourful, stylized characters engage in over-the-top action, WWE All Stars is a light-hearted take on wrestling and much the better for it.

Forget about all the ludicrous soap-opera style backstory and hammy playacting you see on the TV or in the other, more ‘serious’ simulation games on wrestling; WWE All Stars dispenses with all that nonsense and just focuses on bringing fast-paced, relentlessly entertaining fighting across the more popular match styles, including a straight 1v1, tag, extreme rules and a cage match. While you can engage in a quick ‘exhibition’ fight in any of those formats, the ‘Road to Champions’ and ‘Fantasy Warfare’ game modes are the meat of the game and progression through the 10 preset matches in the first will unlock new costumes, while the second will unlock new ‘hidden’ fighters to the game roster. Not that there’s much meat there: the arcade heritage of WWE All Stars is clear, and most pleasure is going to be derived from quick, 10-minute plays of this title, given the lean offering (in comparison with other wrestling titles, that is). WWE All Stars is at its best playing at home with a couple of friends or members of your family.

Uniquely, for a wrestling game, stars from the WWE, WWF and WCW are in the same game and the lineup includes some ‘golden oldie’ wrestlers that the 30yr+ crowd will recognize and happily choose, including Hulk Hogan, Randy Savage and The Rock. Some likenesses are better than others – the only thing that looks like the Rock is his trademark raised eyebrow, but the Undertaker and Triple H, for instance, look spot on. But appearance is less important than the moves, and each fighter in the game exhibits their signature strikes and, most enjoyably, finishing moves, executed with a visual flair that is flamboyant and hugely fun. Unlike in the more sim-style wrestling titles, the animation is actually extremely fluid and, thanks to pre-determined paths in special moves and so forth, there’s a lot less frustration from seeing your wrestler facing the wrong way, running on the spot and generally looking like a bear wearing a corset while wading through a swamp.

You can create your own character, choosing a move list, finisher and entrance from those of your favourite wrestlers, and pit your new guy against the superstar lineup. There is also a ‘fantasy warfare’ mode, allowing for matchups that will never happen….a briefly diverting option pitting former superstar against current legend.

WWE All Stars is brilliant, basically, and will provide hours of fun for just about any gamer. The ‘hardcore’, emasculated wrestling fans who still think this is all real will complain about the lack of depth but just about everyone else will see this as a long overdue and very welcome reimagining of wrestling games that finally matches the real-life activity in terms of fun through sheer absurdity.