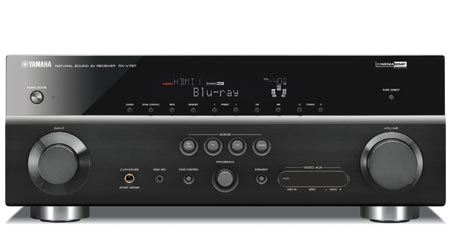 It is clear that with this receiver Yamaha focused on the essentials of home theatre, and left aside completely new digital media (aside from the iPod/iPhone … it has a port for Yamaha’s dock).

So there is no USB nor Ethernet. Instead you get six HDMI inputs. One of them is on the front panel (easy to plug in your digital camcorder). Aside from S-Video, it is well endowed with AV inputs.

It has almost all the current audio processing standards. Of course it supports Dolby TrueHD and DTS-HD Master Audio, but it doesn’t support Dolby Pro Logic IIz. The reason is that Yamaha has had its own front ‘height’ audio mode for years. So it can still power what it calls ‘presence’ channels, and they have a similar, very subtle, effect to DPLIIz height channels.

Impressively, the unit not only has a nicely re-designed graphical onscreen display, this works by overlaying the onscreen video, showing even over the top of a Blu-ray 3D signal.

The unit upscaled video from both analog and HDMI inputs and did a respectable job. The audio performance was very strong, with plenty of power and punch, and a good default sound provided after performing the automatic calibration.

Many of the receivers we’ve seen have CEC (Consumer Electronics Control) implemented to at least some extent, and this receiver was no different. But it seemed a touch smoother than some of the other receivers. For example, the unit will pass through HDMI signals when switched off. That’s useful because late at night you might want to watch a movie using the TV’s own speakers, avoiding noise issues with the neighbours. Most receivers that pass through signals require you to select the relevant input prior to switching it off. But even though I had switched this receiver off with a different input in place, when I switched on a CEC-equipped Blu-ray player, it automatically routed its signal through to the TV.