2008 Canon Digital Lifestyle Index: what tech have Australians been buying? 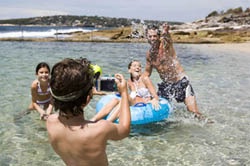 Australian consumers’ appetite for digital devices shows no signs of waning. The latest Canon Digital Lifestyle Index (CDLI) reveals that between January-June of this year, Australians spent a whopping $2.424 billion on digital technologies – the highest figure ever for this period.

These figures are among the findings from the latest CDLI and illustrate continued growth in digital technology categories and the importance of digital technology in Australian consumers’ lives. The CDLI is independent research commissioned by Canon and compiled by GfK using information on sales figures (units and dollar value) provided by GfK’s retail audit panel.

“The Australian technology industry is still expanding, experiencing higher sales growth than the retail industry sector as a whole,” said Darren Ryan, Assistant General Manager – Marketing, Consumer Imaging Products Group, Canon Australia. “I believe the trend can be attributed to the importance of digital technology in our lives – there’s growing need for consumers to have the latest technology and it’s now more accessible than ever.”

The growth from the latest CDLI report was even higher than the corresponding period in 2007, with total sales values for products covered by the CDLI increasing by 12.1%. At this rate and based on second-half trends that take into account the Christmas period, Canon foresees a record spend of 5.5 to 6 billion dollars by the end of 2008.

Product categories showing unit sales growth in the latest report include digital media players, game consoles, digital still cameras and multi-function devices. The biggest earners continue to be flat panel televisions which in the first half of this year experienced a large increase in the lead up to the Beijing Olympics.

Average selling prices fell in 10 of the 11 product categories covered by the CDLI (by around 11% on average from Q2 in 2007 to the same period in 2008). The significant price reductions help keep sales buoyant, with products previously unattainable now becoming increasingly accessible. “In digital imaging, increased affordability means that consumers have access to technology that was previously out of reach, which is opening up a whole new world of creative possibilities for them,” said Ryan. “Australian’s are renowned early adopters of technology and the CDLI reflects the unprecedented importance of digital imaging in peoples’ lives”.