A matter of resolve: what makes up an image 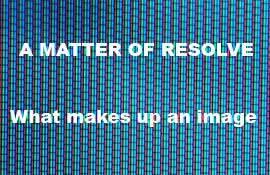 We’ve all spent time in a major electronics retailer, looking at a big flat-panel TV. And while the sales assistant prattles on about the TV’s amazing features, it’s only natural to wonder why one 42 inch TV costs $1,000 more than the 42 inch TV sitting next to it.

Similarly, as the sales geek gets into the TV’s amazing ‘high definition’ support, you’re given cause to wonder. What is it about the TV that makes it high definition? It’s easy to see from in-store demonstrations that a HD set gives a crisper, more detailed image, but how is this crispness measured? How do you know exactly what degree of extra detail you’re getting, per dollar?

Not so many years ago the word ‘resolution’ was heard only in the context of the UN trying to stop some country or other from going to war. But nowadays resolution is a term we use to describe the imaging capabilities of a wide range of consumer electronics. Everything from your mobile phone to your desktop PC will have a resolution entry in its table of vital statistics.

Resolution in electronics is most commonly used to describe two things: the ability of a display to show detail, and the ability of a digital camera to capture detail. Printers also have resolution, but since almost every model of printer offers the same level of detail, we don?t hear much about it anymore.

As usual, the measurement of resolution on a display is defined by the way we measure it on a PC. Unlike an old-school television, which receives an analog signal from a TV transmitter, PCs receive digital signals from the computer’s video-generation chip or card.

On older monitors (which use TV-style technology) this signal is converted to an analog signal, but since its origin is digital it has a very precise level of detail. This detail is measured in the number of picture elements, or pixels, the video subsystem can output.

Essentially, every image you see on a computer (and on a modern TV) is a mosaic. The trick is that the tiles are really, really tiny, so to our limited eyesight, the image seems smooth if it’s sufficiently ‘high resolution’.

In the good old days the tiles, or pixels, weren’t particularly small, so images appeared blocky and poor in detail. In the early years of the home PC, the technological struggle was to add colour. Many PCs could display only a maximum of 320 horizontal pixels and 240 vertical pixels.

As graphics systems became more powerful, the resolutions increased. The move to 640 horizontal by 480 vertical (640 x 480) was a key moment for gamers, while even higher resolutions such as 800 x 600 and 1024 x 768 made watching video on a PC a real possibility.