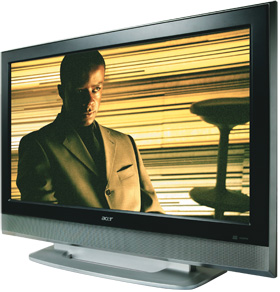 Remember when virtually all panel TVs were 42 inches (106 cm), provided merely low resolution, and cost $10,000 or more? Thankfully those days are long passed. Instead, in the AT4220B, Acer offers us an LCD TV of that size for well under $3,000. It delivers a high resolution of 1366 x 768 pixels, and even includes a HDMI input for the best picture quality available from DVDs and high definition set-top boxes.

The TV comes equipped with an analog TV tuner and built-in speakers, which are located underneath the screen, so that the TV is not much wider than the viewable area of the LCD screen.

Acer says that the display has a contrast ratio of 1200:1. There are plenty of inputs, including three for component video, except for HDMI, of which there is only one. None of the inputs are accessible from the sides or front, nor is there a headphone output.

The TV’s autoscan function worked effectively, correctly tuning all the local analog TV stations within a few minutes. Each could be named, with Acer adopting SMS-type keypad text entry, so it was a lot faster than most systems that require you to scroll through an average of half an alphabet for each letter. The stations could also be sorted into any preferred order.

Acer has a special ‘Empowering Technology’ key on the remote control, which sounds like more than it is. This is just a key that can be assigned to either cycle through the various picture presets, or switch to a favourite channel listing.

Now you wouldn’t expect much in the way of performance from a 106 cm LCD TV that sells for a price-busting $2,799. But you would be wrong.

The only real significant weakness in performance was the analog TV tuner, which did not produce a very good picture at all. So buy yourself a digital TV tuner instead.

The PIP mode looked impressive, but it locked one of the pictures permanently onto the VGA computer input, so it was largely useless.

But the panel performance was excellent. The blacks on offer weren’t quite as deep as those from the high-end Japanese makers (which cost more than twice as much), but they were even and controlled. Better, the colour did not glare out, but was disarmingly natural.

When Acer claims a 176 degree viewing angle, it ain’t kidding. Even at the most extreme angles the colour balance and contrast remained unaltered. This is among the best I have seen on this front.

What was particularly surprising was the video processing, which is responsible for scaling the picture and, when appropriate, removing interlacing. The scaling was fine, and the de-interlacing top notch. It dealt better with some of my difficult test signals than the HQV (Hollywood Quality Video) processing built into some high-end equipment.

Acer has come up with a real winner with this LCD TV. Couple it with a good high definition set-top box, and you’ll have an excellent large TV at a great price.