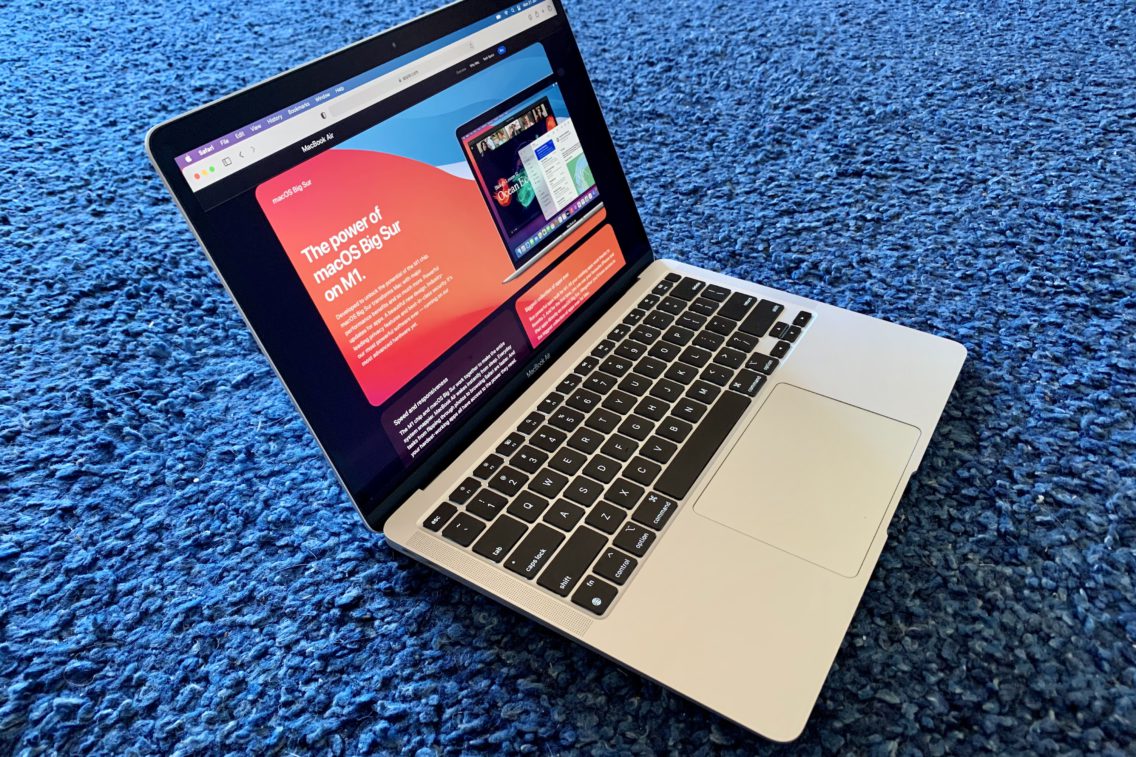 The Apple MacBook Air (M1 2020) has Apple’s new M1 power plant under the bonnet, laying the foundations for Apple’s next big leap.

New Macs come along every year, but it’s not very often that Apple changes the underlying architecture. The Apple MacBook Air (M1 2020) is part of the first generation of Macs that abandon Intel processors in favour of Apple’s own M1 SoC (System on a Chip) – also known as “Apple Silicon”.

Already found in Apple’s high-end iPad Pro, the M1 combines the ARM-based CPU, GPU and RAM onto a single chip. This offers many benefits: performance, power efficiency and an SSD performance boost thanks to the integrated hardware controller.

But there are a few trade-offs.

First, you can’t upgrade any of the M1’s components because they’re baked in. So don’t think you can skimp on RAM to save a few dollars and then upgrade down the track.

Second, macOS apps must be re-compiled to run natively on the M1 hardware. Thankfully there’s a transition period, with Apple’s Rosetta software allowing old Intel apps to run on the new M1 hardware. Technically it is Rosetta 2. We went through a similar transitional period when Apple moved from PowerPC architecture to Intel back in 2006.

Apart from Apple’s own software, so far, only a handful of the major applications have made a move to run natively on M1 Macs. This includes Microsoft Office, Parallels and a range of Adobe software, including Lightroom, Photoshop, Illustrator, InDesign and Audition, with more to come.

If your Intel Mac is a few years old, upgrading to an M1 Mac will still likely deliver a noticeable performance boost running non-M1 compatible apps on Rosetta.

There are two Apple MacBook Air (M1 2020) base models, starting at $1499 and $1849. We put the top-end model to the test. The key difference – both sport M1 chips with an 8-core CPU but the expensive model opts for a matching 8-core GPU for graphics. The cheaper model dials this back to a 7-core GPU.

The notebook sports the slender, elegant and minimalist aesthetics we’ve come to expect from the MacBook Air’s aluminium unibody design. Power it up, and it understandably looks and feels like any other Mac running macOS 11 Big Sur, with a crisp and vivid Retina P3 Wide Colour Gamut display.

The iPad-style “instant on” feature ensures macOS awakes from slumber before you’ve even finished lifting the screen.

The M1 chip keeps Big Sur feeling snappy for day-to-day tasks. To be fair, it takes a lot more for the M1 to break a sweat. When it does, the MacBook Air now has passive cooling – no noisy fan to kick in when it’s working hard.

Thankfully the M1’s energy efficiency curbs its heat output, so you’re not going to roast your lap. The energy efficiency also extends the battery life. Apple promises up to 15 hours (or 18 hours if it’s just video playback). Under light load, it came in around 13 hours. That is closer to true “all day” battery life for those who tend to burn the midnight oil.

The Apple MacBook Air (M1 2020), cooling fans for its M1 chip aside, is mostly the same as its predecessors. The older your current MacBook, the more changes you’re likely to notice.

You get two USB-C ports on the left (Thunderbolt 3/USB 4) and a 3.5 mm headphone jack on the right. The latter is surprising, as Apple seems hell-bent on pushing the Apple faithful to Bluetooth headphones.

Depending on the accessories in your travel bag, those USB-C ports are a blessing or a curse. You can use them for charging the MacBook Air, linking to DisplayPort monitors and connecting to external Thunderbolt/USB devices.

Chances are two ports won’t cut it, especially when one is tied up as the power port. You also lose the safety of the MagSafe charge port, which ensured that a snagged power cable wouldn’t send your expensive MacBook crashing to the ground. Rumour has it that MagSafe may make a comeback.

We turned to the Belkin USB-C multimedia hub for testing, which turns one of the onboard USB-C ports into two USB ports, HDMI, Ethernet and an SD card slot – along with another USB-C slot for connecting to power or USB-C devices.

You’ve got the Force Trackpad at your fingertips, along with a backlit keyboard. It’s an improvement on the oft-maligned butterfly keyboard, but it doesn’t have much travel compared to a thicker MacBook with more room for the keys to depress.

You don’t get the MacBook Pro’s fancy programmable touch bar at the top of the keyboard – no great loss. You do get a Touch ID fingerprint reader built into the power button at the top right.

The Apple MacBook Air 8GB RAM (M1 2020)’s multi-core Geekbench score of 7738 puts almost every other non-M1 Mac to shame. Even though it is a MacBook Air, it outguns the Intel-based MacBook Pros. Only the Intel-based late 2017 iMac Pro, Late 2019 Mac Pro and Mid 2020 27-inch iMac beat the Geekbench benchmark.

The M1’s power really shines through with a single-core Geekbench score of 1737. Here it outperforms even those few Intel Macs which outpace it in the multi-core tests.

Running on Rosetta, delivers 1326/6010 single/multi-core Geekbench scores. Here it holds its own against the Intel Macs on multi-core results while outgunning them in a single-core showdown.

Under real-world testing, the Apple MacBook Air (M1 2020) doesn’t disappoint. It proved its worth producing my weekly podcast Vertical Hold: Behind The Tech News.

For example, the Zencastr online audio/video recording platform can tax older Macs when there are a few people on the video call. But it didn’t skip a beat running in the M1-compatible Chrome browser with four people in the call. The CPU and RAM usage barely flinched.

Of course, those USB-C ports would have thwarted me were it not for the Belkin USB-C multimedia hub. It connected the Yeti Blue microphone, external HDMI monitor and external webcam in my recording studio. As these USB-C ports are also Thunderbolt 3 compatible, you can use any of the Plugable docks to add even more expansion. Remember iPad only supports one external display.

Meanwhile, Adobe’s Audition audio editing software is now is an M1 native which loads in three seconds. That is breathtakingly fast if you’ve been running it on an older Mac, which tends to groan under the load. Importing and processing multiple raw audio files, such as applying Match Loudness, is also considerably faster. The extra grunt really shines through when Audition makes light work of spitting out the 55-minute final mix in less than 60 seconds.

If you’re in the market for a new Mac, it certainly makes sense to opt for an M1 model. Or wait until the model you want has undergone an M1 overhaul. Apple says the switchover will take about another 18 months.

That said, there’s no need to dump your Intel Mac just yet. Apple continued supporting PowerPC Macs for another four years and should do at least the same for Intel machines.

But when your current Mac is ready for the big recycling centre in the sky, the M1 processor will make for a welcome upgrade.

If you’re after a productivity companion but don’t need loads of horsepower, you might lament the lack of a 15/16-inch MacBook Air. As a result, you’re forced to step up to the pricey and overpowered 16-inch MacBook Pro if you want some extra screen real estate.

Yes, if I was happy with a 13.3-inch display and didn’t need something larger.