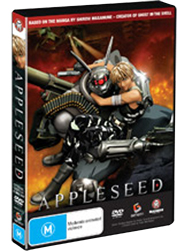 This powerful story is from the makers of the anime classic Ghost In The Shell and the pedigree shows. The principal character Newt is a diminutive, but deadly soldier. However life is much more complex than this as Newt is a half human hybrid, who also holds the key to the survival of mankind. Clones have been created in the last human city to survive the war and Appleseed implicitly explores ideas like racism and ?what it is to be human?. This is a thrilling and superbly animated movie which is chock full of extras. There is a 2 DVD set, which includes interviews, an image gallery, plus a mini documentary focusing on the making of the film.